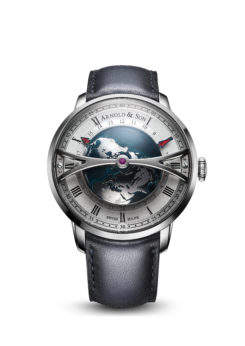 A three-dimensional work of art, Globetrotter shows a second time zone via the world map in its center. While most world timers have the cities listed on a chapter ring, this timepiece expects the wearer to set the local time’s hour hand, then set the home time by finding the location on the map using the crown, then aligning it with the 24-hour sapphire ring. The intriguing piece uses the Arnold & Son self-winding A&S6022 caliber. The domed globe depicts the Northern Hemisphere as seen from above the North Pole. The beautiful map was created in brass. The continents are chemically etched, then hand-finished. The mountains were sandblasted to create visual depth and the oceans are lacquered with blue tones. The globe is held in place via an arched bridge that spans the diameter of the dial. The 45mm watch is one of the world’s largest rotating 3D world-time displays, with all three functions set from the crown.