British food is having somewhat of a shake up at the moment. Gone are the days of young chefs slaving away in big name kitchens in London. Instead a lot of talented chefs are taking it upon themselves to open up their own restaurants, putting their own stamp on their properties and really honing their skills. To celebrate we have compiled a list of our seven favorite chefs to look out for in 2018. 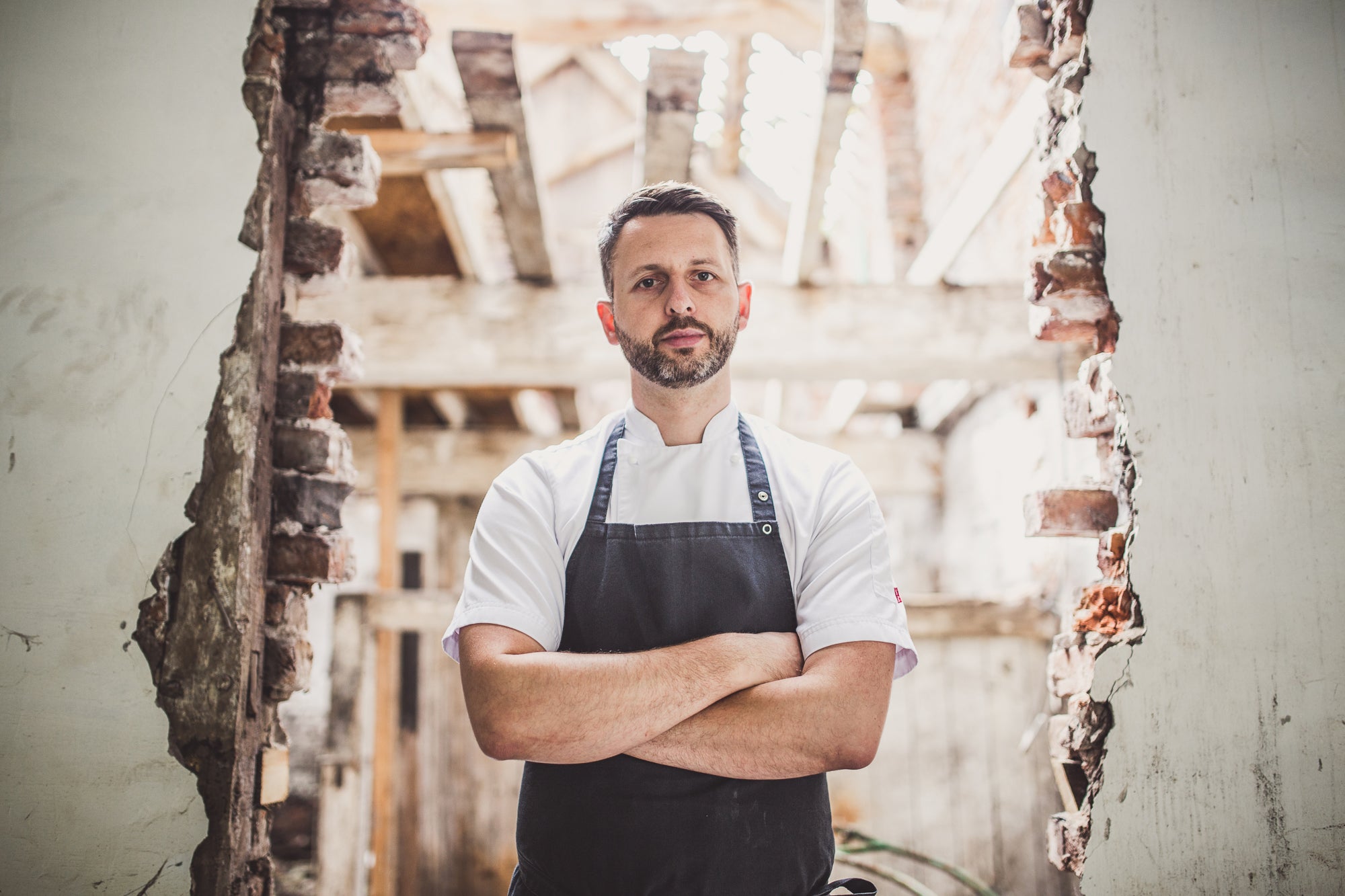 Having honed his culinary skills at Michelin starred restaurants such as The Walnut Tree in Wales, Northcote in Lancashire, where he worked alongside chef Nigel Haworth, and L’Enclume by Simon Rogan, Mark Birchall knows what it’s like to work in truly world-class fine dining settings. He eventually became head chef—and then executive chef—at L’Enclume and won the prestigious Roux scholarship in 2011, which gave him the opportunity to work at three Michelin starred El Cellar de Can Roca by the Roca brothers for three months.

With the aspirations to open his own restaurant he then went on to buy Moor Hall with his business partners Andy and Tracey Bell. The restaurant was finally ready to open early 2017, combining a historic façade with modern British fine dining plates that take inspiration from Moor Hall’s natural surroundings. Towards the end of October, Birchall then launched his second restaurant here; the adjoining dining spot, the Barn. With such ambition and culinary talent, it’s no surprise Birchall is pegged as one of Britain’s prominent rising chefs. 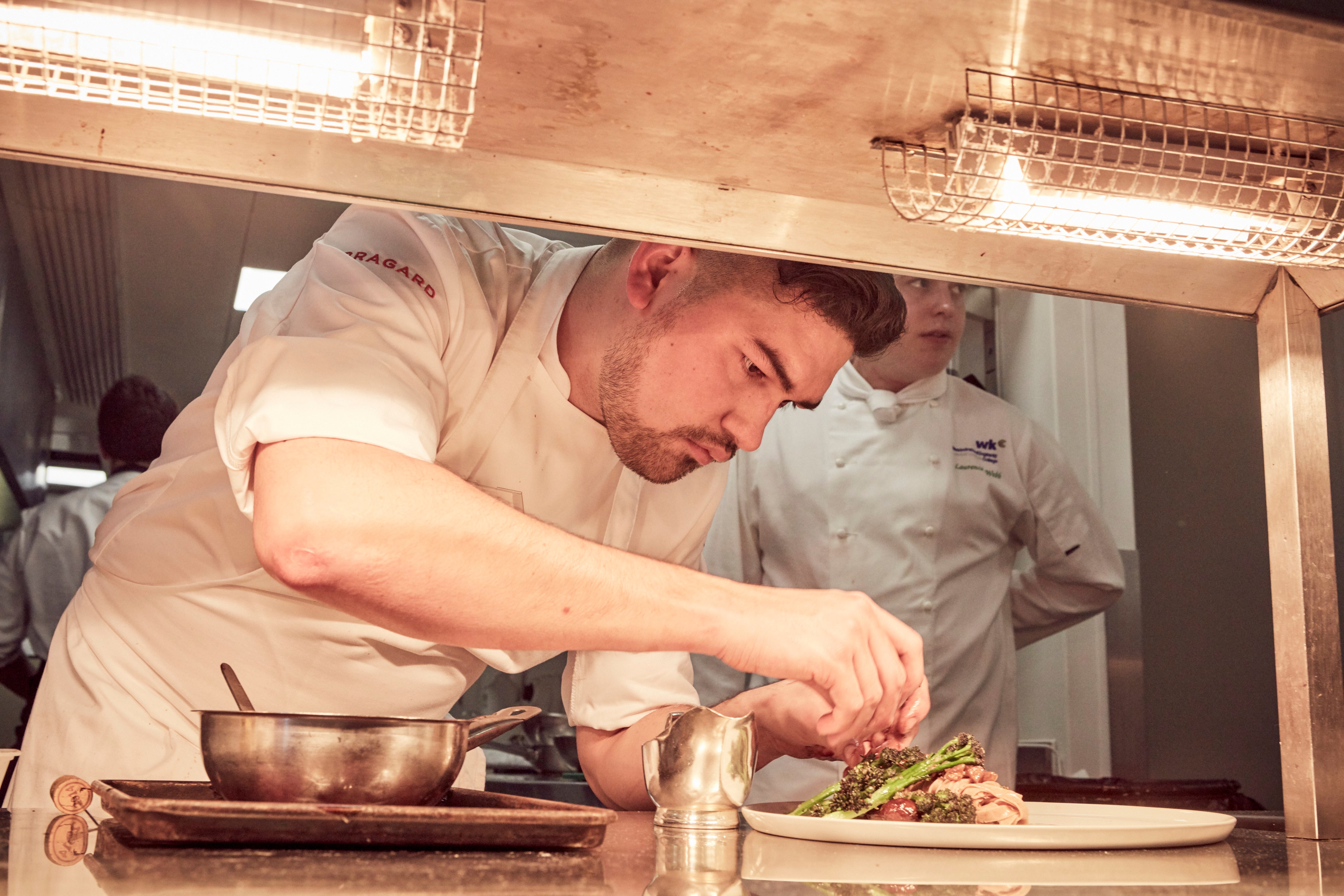 Having been named the winner of the Roux Scholarship in 2017, training at three Michelin starred restaurant Nihonryori Ryugin in Tokyo as a result, then going on to receive the UK’s National Chef of the Year 2017 award—he also won the Young Chef of the Year award in the prestigious culinary contest in 2014—this has been an extraordinary year for Luke Selby.

He was working as head chef at renowned restaurant Dabbous in London when he was awarded the Chef of the Year accolade, then choosing to undertake his Roux Scholarship training in Japan to gain insight into the unique culture and cuisine the country is known for. Now, the rising chef is said to be exploring the idea of opening a restaurant with Ollie Dabbous in 2018. Whether or not, this particular plan comes to fruition, Selby is certainly a chef worth watching in the coming year.

When news broke of The Black Swan at Oldstead being rated the best restaurant in the world for 2017 according to TripAdvisor, many were taken aback by the news. While the award gave The Black Swan a great deal of press and inundated Tommy Banks’ restaurant with booking requests from all over the world, saying the TripAdvisor news was what made Banks’ career would be doing this brilliant and hardworking chef a massive disservice.

When Banks’ parents bought the quaint pub in Oldstead, North Yorkshire over a decade ago, the property was run down and in need of serious refurbishments. The subsequent years of refurbishment and redevelopment led to Banks’ taking more of a hands on approach with the restaurant.

The time spent in The Black Swan kitchen inspired Banks to take an interest in the culinary world, with him taking on months of unpaid work in some of London’s top Michelin starred restaurants, including a week in Raymond Blanc’s Le Manoir aux Quat’Saisons restaurant.

During the time Banks was away from the restaurant, The Black Swan first won a Michelin star in 2012 when the kitchen was ran by their former chef, Adam Jackson. When Jackson left the business in 2013 and Banks returned to take over the reigns he cemented his place as one of Britain’s most fantastic chefs by becoming the youngest person to receive a Michelin star when he helped the restaurant retain its star at the tender age of 24.

Since then Banks has gone on to appear on two series of Great British Menu, a show in which some of the country’s most exciting up and coming chefs are pitted against one another for the chance to be able to cook one course of a four dish banquet (this year’s show gave the contestants the opportunity to showcase their cooking at the banquet celebrating 140 years of Wimbledon).

Banks is known for his panache and in depth understanding of how to combine locally sourced ingredients in a way many chefs twice his age struggle to do so.

So while the TripAdvisor award may be Banks’ greatest achievement to date, it is fair to say it is only the start of an illustrious career for the Yorkshire-based chef.

Following the untimely death of his brother Jonray in 2015, Peter Sanchez-Iglesias’ rise to stardom has been bitter-sweet.

While his brother didn’t get to see the transformation of the family-run Casamia and the subsequent opening of two more restaurants (including one of this year’s most talked about restaurants – Paco Tapas), Sanchez-Iglesias’ should take huge pride in the work he has done to introduce Bristol to some of the world’s finest cuisine.

With all three of his restaurants perched along the Bristol waterfront, Sanchez-Iglesias and his family have developed a string of restaurants previously never seen in the West Country. Paco Sanchez-Iglesias, father to Peter and Jonray, still works the front of house at the family’s Casamia despite being well into his 70s, and Paco Tapas was one of 2017’s most talked about restaurants.

Focusing on refined Spanish cuisine, Paco Tapas offers classic dishes reworked in the most luxurious manner. The humble patatas bravas given a new lease of life with the kitchen double-frying the potatoes before adding perfectly ripe tomato and a homemade chili sauce, while the calçot comes expertly blackened, served with a delightful romesco dip (a nut and red-pepper sauce popular in Catalan). All of this culminated in the restaurant being awarded its first Michelin star this year, adding to the one already held by Casamia.

What makes Sanchez-Iglesias an obvious inclusion to our list is his drive and unfettered desire to make Bristol a culinary capital in the UK. 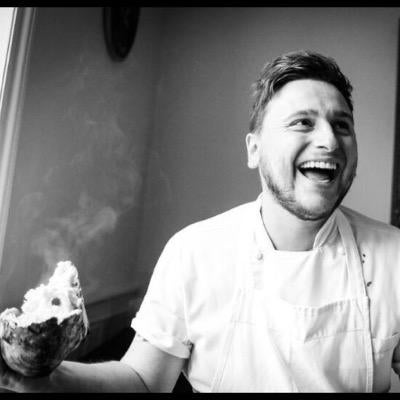 Not to toot our own horn, but Elite Traveler has long been a fan of Le Cochon Aveugle. Since we first visited in early 2014 the restaurant has long held a special place in our heart. With a menu that is as playful as their bra-filled interior, the work Joshua Overington has done with Le Cochon Aveugle has been second to none.

Having taken over the restaurant from the most rock and roll man in cooking, Michael O’Hare, Overington has kept the spirit of Le Cochon Aveugle and transformed it into what is easily the best restaurant in all of York (and arguably one of the best in Yorkshire). A feat made even more spectacular due to the standard set by O’Hare, whose previous restaurant The Blind Swine was perhaps the most over-subscribed restaurant to ever open in the city.

The menu at Le Cochon Aveugle regularly changes, with the focus being on modern French cuisine (expect dishes like squid risotto with langoustine and raspberry or the rather endearing black pudding macaroon), however as with any good chef Overington is more than capable of throwing a curveball to really wow guests. 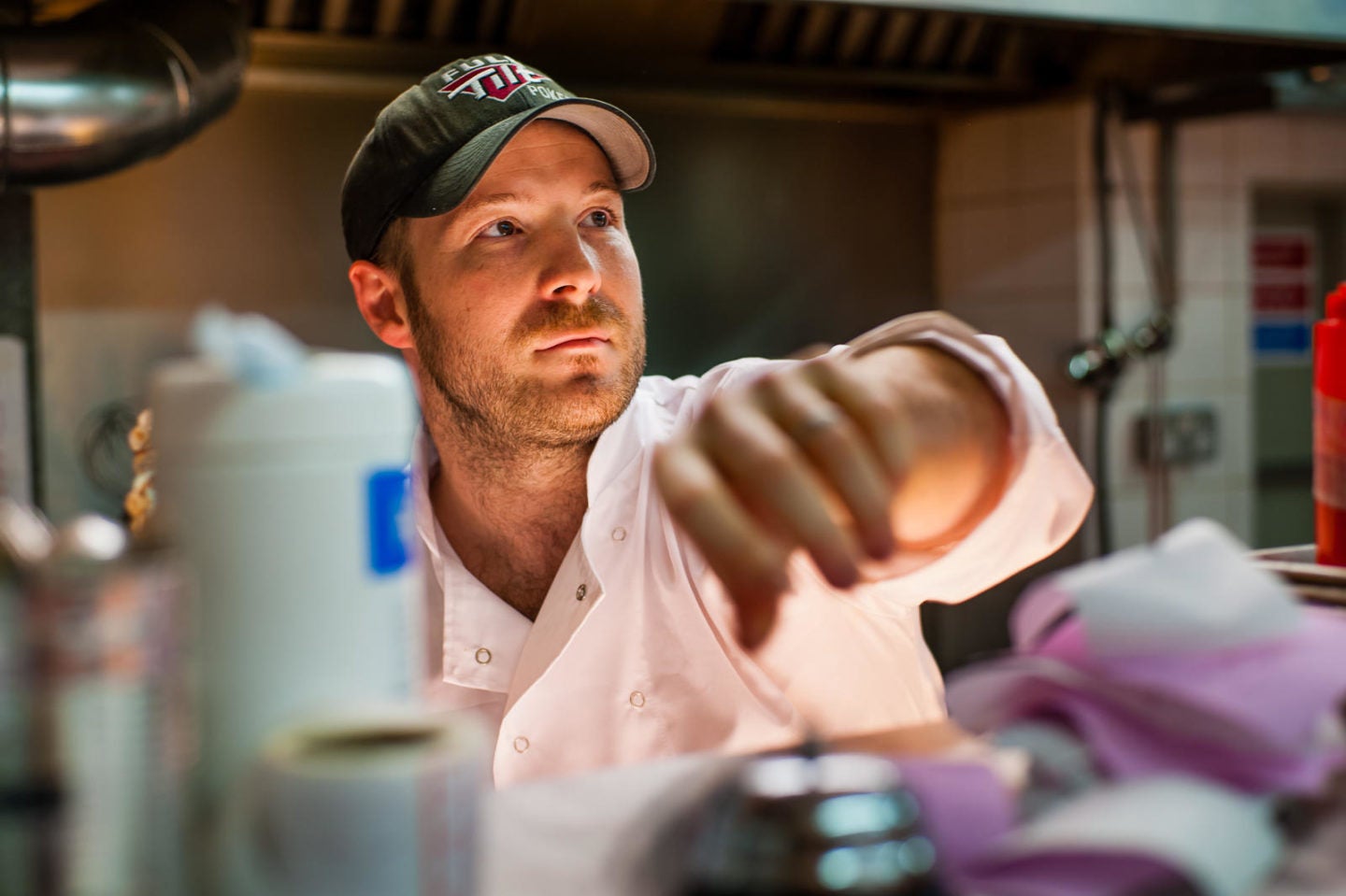 There’s many ways to describe Neil Rankin – meat master, BBQ purveyor, local produce advocate – but one story that really sticks in our mind is that he once told Gordon Ramsey he’s “a terrible f***ing ambassador for our industry”.

This attitude is what really sets Rankin apart from his contemporaries, and while it’s easy to dismiss him as one of the many new ‘bad boys of cooking’, Rankin’s outspoken and honest nature extends to how he works in the kitchen. Focusing on using only the finest cuts sourced from some of the country’s top farms, Rankin has fast become one of the capital’s most iconic and exciting chefs, and is well known for delivering casual venues with a very sophisticated menu.

Before starting up his own series of restaurants, Rankin worked under the likes of Michael Wignall and Nuno Mendes, as well as honing his BBQ skills in Jamie Oliver’s Barbecoa. Rankin is now well known for his innovative take on traditional cooking methods (think open fires, BBQs and smokers), helping elevate the once humble BBQ and turn it into something truly special.

Set to open his third temper outpost in as many years, Rankin’s first restaurant, temper Soho, focused on serving South American inspired BBQ, with many of the dishes served in tacos and on homemade tortillas. While his second venue – temper City – offers tandoor roasted meats and delicious curries.

For his third, and most recent, restaurant Rankin looks set to have a go at revolutionizing the pizza – serving all his dishes alongside an extensive vermouth menu. 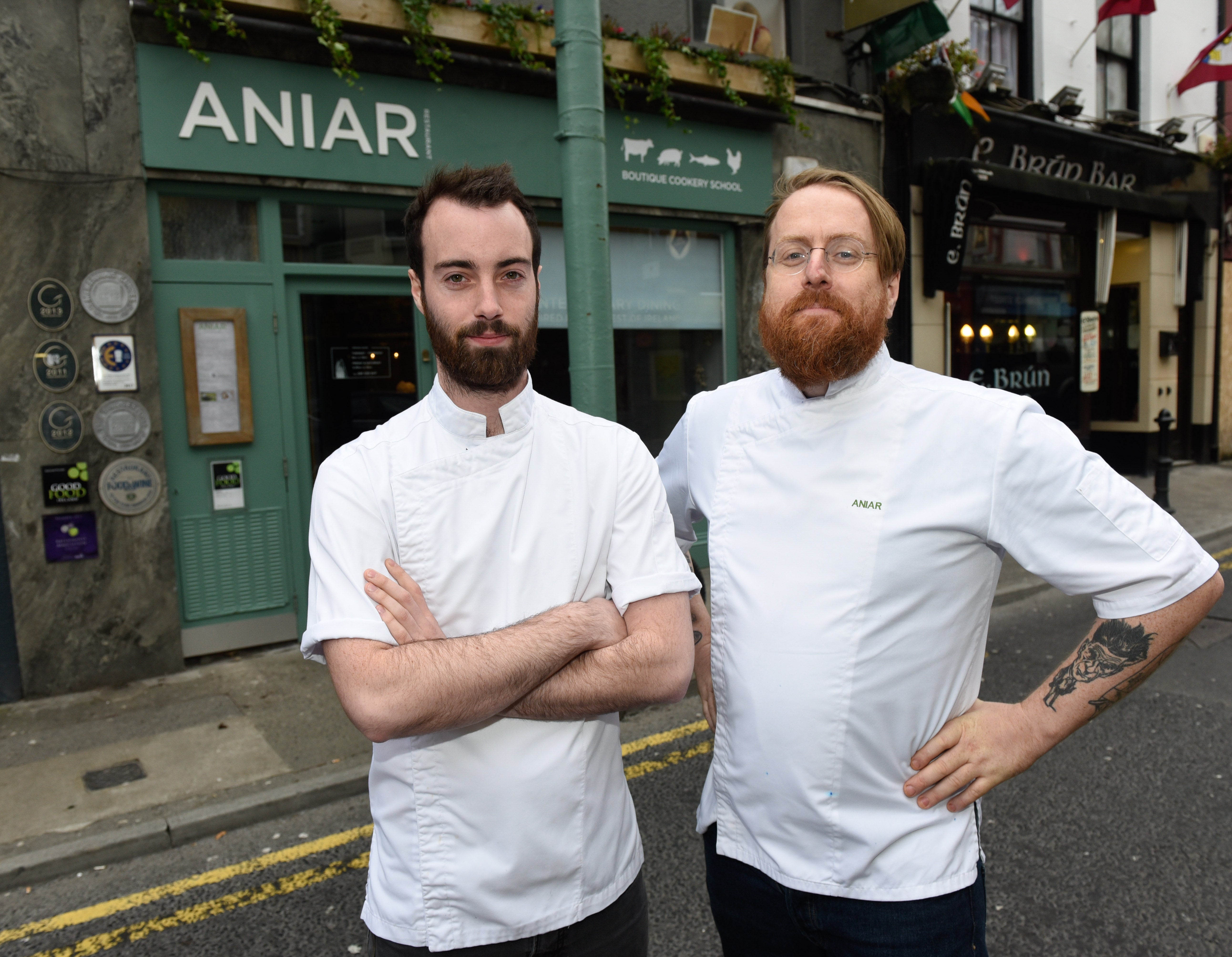 “The Irish food scene is taking newer directions,” he enthuses, “I feel I want to be part of this movement and that’s why I’m here. Aniar is the base of this new direction and we have so many great products here in the west of Ireland. I believe that these Irish ingredients are as good as they are anywhere in the world. On a daily basis we work closely with local fisherman and farmers who supply the majority of the produce that we use at Aniar, proving the quality of our surroundings. The amount of amazing ingredients we can find locally is, for me, the reason the younger generation of chefs needs to be educated in the way that where we live local, we eat local.”

While continuing to champion Irish cuisine, Crowley will take part in the June 2018 final of the San Pellegrino Young Chef awards in Milan.