Vanderhall MotorWorks’ three-wheeled autocycle is vintage for the modern era. 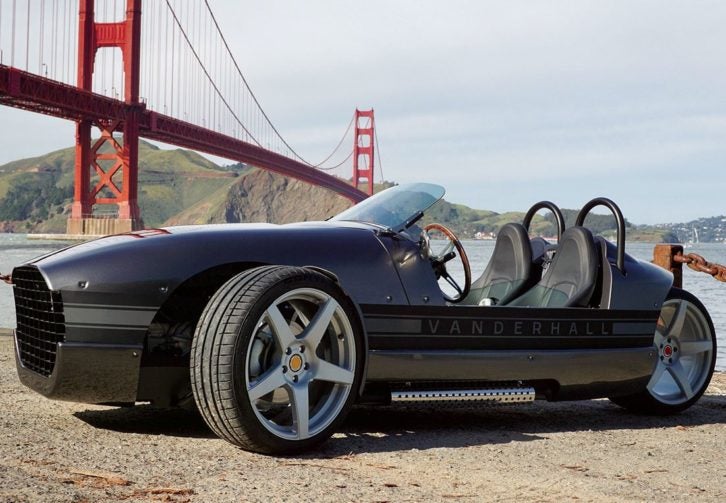 Cruising the balmy Southern California canyons, windswept and three-wheeled, the Vanderhall Venice radiates a distinct air of cool in a valley of cloudless skies. Part of that may be due to its lack of a roof, but the rest, it can be assured, comes via design.

The front tires are open wheeled, while recessed exhaust pipes—so as to avoid calf burns upon entry or exit—peek out from under the vehicle. Through the oval front and tunnel-like tail, each light is masked behind a grille, adding to the classic-racer feel, also evident in the thin, airbag-absent wooden steering wheel.

Inspired by the Lotus Seven, the Venice shares the same wheelbase as a Porsche 911 and is assembled start to finish in Provo, Utah. A six-speed automatic transmission and 1.4-liter turbo engine come standard, providing 180 horsepower, enough to climb even the steepest of inclines. Optional Brembo brakes offer some serious stopping ability; from 60 mph in 85ft to be precise.

Helmets aren’t required in autocycles, but considering the Venice’s doorlessness and near-ground-tickling height, it wouldn’t be a terrible idea to wear one.

Venice’s charm lies in its simplicity: toying with the old-style ball shifter is as complicated as it gets for the driver’s hands. Massive touch screens and air-conditioning aren’t available—they’re just not on brand. A set of black 18in wheels, however, comes standard. Joy is optional, but almost guaranteed.