The hills are alive with the sound of cowbells, and bangs from the impressive firework display at the grand opening of Bürgenstock in Switzerland. But, this is more than just a hotel opening — it’s an entire village. 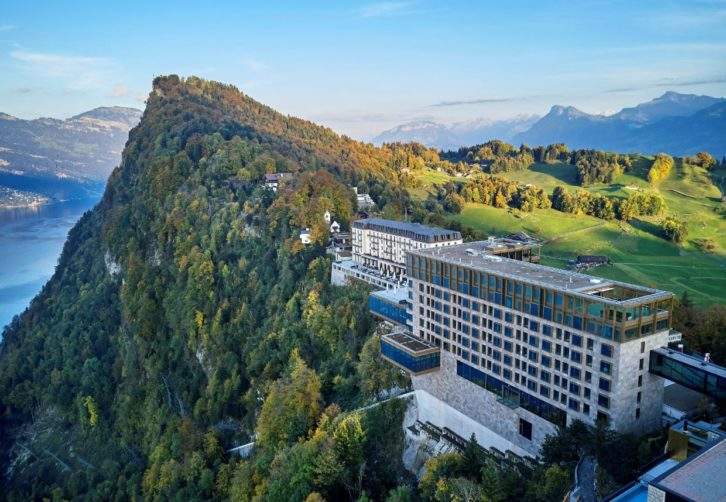 Accessible via a smooth boat ride across Lake Lucerne, followed by a delightful ascent in the lacquered, pillar-box red funicular, the resort stands high above the clouds at 1,640 ft up from the lake. Within this village in the green-grassed (or snow -capped, depending on when you visit) mountains, Bürgenstock Resort is comprised of four hotels: the striking architectural masterpiece, Bürgenstock Hotel & Alpine Spa; the historic Palace Hotel; the state-of-the-art Waldhotel Health & Medical Excellence center; authentic Swiss chalet Taverne 1879; and the residences.

The resort is steeped in history; it first opened in 1873 and saw Audrey Hepburn marry Mel Ferrer in the chapel in 1954. Sofia Loren called it home for many years — her former residence is now an intimate Middle-Eastern restaurant with ornate lanterns dangling from the trees outside (order the Lebanese cheesecake).

The $700m renovation kept the original charm alive, but with a list of incredible updates: In total, there are now nine restaurants and bars, three tennis courts (one of which transforms into an ice rink come winter), a nine-hole golf course, cinema, enormous spa, cigar room, wine cellar with over 800 bottles and a shopping arcade selling Swiss watches and chocolates. But in keeping with the resort’s verdant setting, many of the building’s roofs have gardens growing on top, so your view isn’t compromised. And what a view! The best vantage point is at the top of the Hammetschwand elevator. It was initially built in 1905 and stands as the highest outdoor elevator in Europe. If you do one thing, this is it — after taking a pleasantly meandering stroll through the mountainside, you’ll reach the elevator and travel 500 ft in less than a minute to the top of the Hammetschwand mountain. On a clear day, you can see the Swiss Alps in the distance. Even if it is a cloudy day (as it was when my acrophobia and I went up), it’s hauntingly beautiful to see the lake blanketed in clouds below.

Of course, Switzerland is known for having the world’s best spas, and Bürgenstock certainly upholds that reputation. The chalet-style Alpine Spa is home to the infinity pool with the most jaw-dropping views of the lake below and the mountains — you’ve more than likely seen the pool on your Instagram feed. The clouds drift by below, and it’s easy to spend hours relaxing in the hot tub as you watch seaplanes and helicopters pass by. The crisp mountain air is sure to give you a rosy glow, but head to the Waldhotel if you’re after something more extensive. The curious structure looks like a futuristic tree house, and was fashioned with wood from the nearby forest and stone from the site’s excavation. It has 23 medical rooms that offer minor surgeries, X-rays and cosmetic treatments; cryotherapy; a rehab swimming pool with wheelchair access; plus a huge menu of treatments and programs.