Amazónico, a rainforest-themed bar and restaurant, arrives in London following notable success in Madrid. Elite Traveler was one of the first to experience the South American-themed sensation in its Mayfair home.

It says a lot about a restaurant’s ambition when it parks itself next to the cultural phenomenon that is Sexy Fish. Not only that, Amazónico is taking direct aim at its customer base. The Asian-themed, sushi specialist Sexy Fish has been the ‘place to be seen’ in London for some time but is now under direct threat from a very noisy neighbor.

Sandro Silva and Marta Seco, the people behind Amazónico, arrive in London with a big reputation. Amazónico Madrid is Spain’s hottest hangout with soccer superstar Cristiano Ronaldo among its regulars. Silva and Seco are clearly confident. They have spent $13m transforming a bank in London’s Berkley Square into a mega restaurant resembling the wilds of South America.

There is a palpable sense of grandeur when you walk in. Almost a dozen hostesses await in dark-green jumpsuits. One steps forward to take us on a journey through the bar, past the open kitchen, around the sushi bar, and to our table. The journey takes at least a minute. We walk a forest’s worth of plants, several ornamental peacocks and a pineapple rotisserie to get here. We are deep in the Amazónico jungle now. 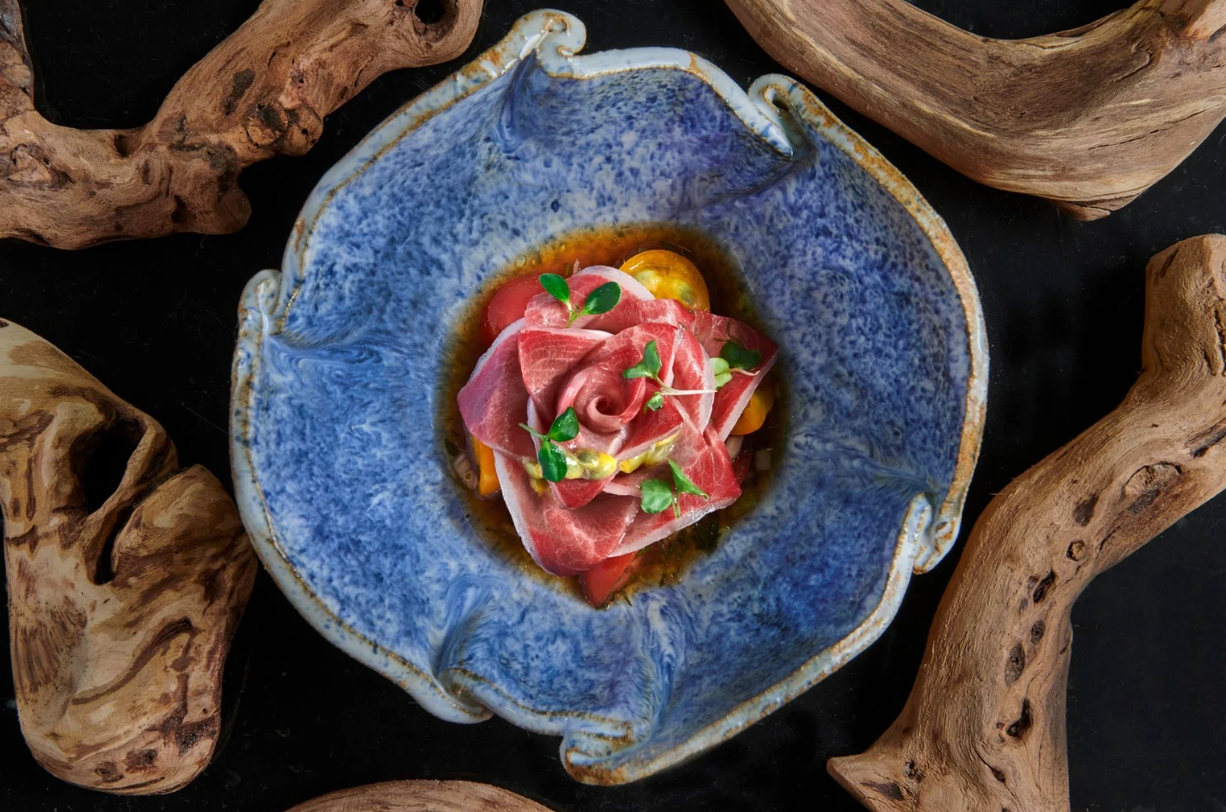 The space can serve almost 300 guests at any one time across its five areas. It appears to be running close to capacity despite the fact it is one of its first Tuesday evening services. Whatever Amazónico is doing, it is doing it right.

The menu offers the best of South American cuisine. It includes traditional foods such as ceviche, Brazilian-style steak, and avocados aplenty. There is an emphasis on whole foods with a big selection of holistic poke bowls and salads to choose from.

It may seem like we are in the jungle, but the prices remind us that we are still very much in Mayfair. Some dishes are stomach-churningly expensive. That is not to say it is overpriced though. After all, someone has to pay for the jazz band that performs well into the night. Someone also has to pay for the DJ, those disconcertingly realistic peacocks and everything that makes Amazónico what it is. That someone is you.

We start in the raw and marinated dishes. This menu has been created by chef Vito Reyes, who, coming from a restaurant called Ceviche, knows his way around raw fish. The Hamachi Tiradito is a thinly sliced yellowtail served with passion fruit. It’s a delight to the senses.

The Zapallo y Jicama Tacos from the Amazónico Bites section is also a notable triumph. Served in a carved out Peruvian pumpkin, it is a mix of roasted pumpkin, cream cheese and fresh turnip. It is one of those dishes that would go down so well on a cold night in the Andes, and equally so in a chilly London. 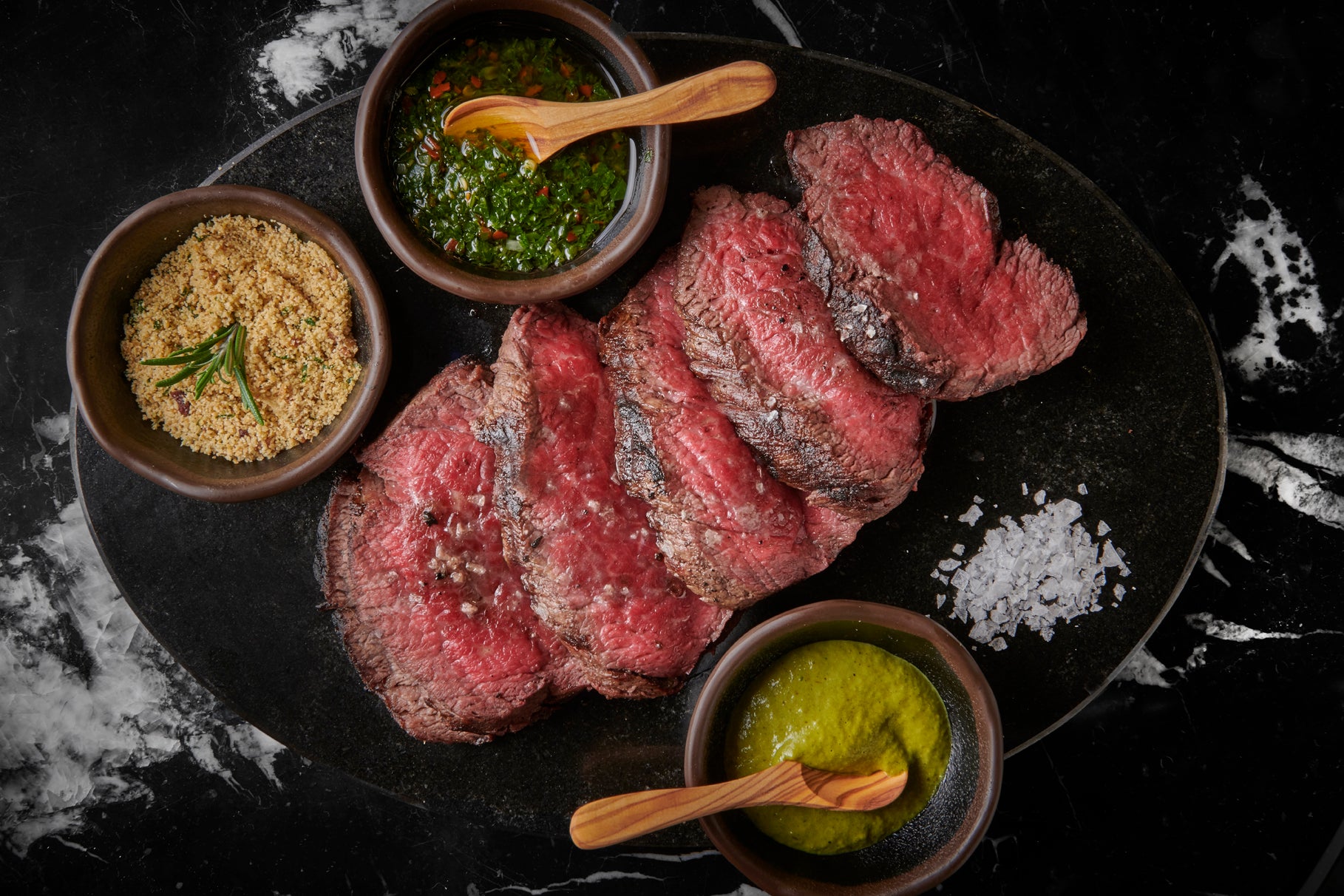 The Chilean wagyu beef served with a selection of sauces

From the grill, we opt for the chimichurri marinated skirt steak (Entraña) and the dry-aged Hereford beef fillet (Solomillo de Res). The meat is grilled over charcoals and served on a hot plate. They are still sizzling on arrival and cooked medium rare as ordered. The steaks are good and complemented by lovely side dishes of new potatoes and chargrilled vegetables. The charcoal grill, however, has dried the meat a little too much for my liking. A casual diner may not notice but a connoisseur of the cow will.

The desserts are supreme and the highlight of the meal. A hot chocolate fondant is presented in a hot stone (the waiter means it when he says “don’t touch it”) that keeps its molten. It comes with a creamy avocado ice cream that adds yet more richness to the dish. Also recommended is the coconut flan served with tonka bean caramel and a delicious mandarin jam. It feels light yet indulgent and is wilfully devoured even at this late stage in the meal.

Amazónico is in many ways a lifestyle choice rather than a bar and restaurant. It has been designed to delight all of the senses and the food can at times feel secondary because of it. But there is a lot of quality on the menu, particularly the ceviche dishes and the desserts. It also already has the seal of approval from London’s trendy elite, who have welcomed Amazónico with open arms.

It is going to be such a big hit with A-listers, especially once the invite-only speakeasy bar opens in 2020. It feels intense yet relaxing, old-school luxury yet cutting-edge chic. It verges on decadent but in an ever-so-charming and unabashed style. Yes, Sexy Fish has some very noisy neighbors now. They had better get used to it.

Pineapples are harvested for syrup on the rotisserie

Topics in this article : London Restaurants