To create this unique single-malt whisky, The Macallan sought the help of the Roca brothers, world-famous for their incredible success at their Girona restaurant. They joined The Macallan whisky maker Steven Bremner on a sensorial journey through London to discover its heart and soul, and ultimately find a way to translate it into liquid form.

Captured on camera, their journey through some of London’s most culturally rich neighborhoods has been transformed into a two-part documentary: Distil Your World London. Fans of The Macallan can watch as the three brothers and Bremner meet with the chefs, craftspeople and creators who fuel London’s vibrancy. 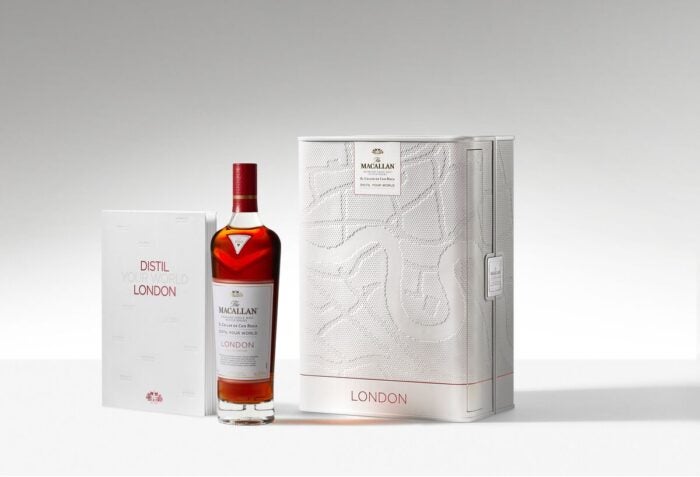 After finding inspiration, the team selected a unique combination of six first-fill European oak Oloroso seasoned casks to translate London’s values into an extraordinary single malt with unique tasting notes representing the spirit of the city. The whisky encapsulates nuances of orange caramel, curry spice and Earl Grey tea. All are unusual notes for a Macallan single malt, which, along with its limited release of 2,000 bottles worldwide, will make the expression highly prized among collectors.

“London is an international city, a melting pot of culture, cuisine, architecture and art, and its rich heritage and myriad of cultures, combined with a timeless spirit and an innovative nature, made it the ideal playing field for this journey of mastery,” Bremner said.

“It is not just about being there but about immersing yourself and dedicating time to understand what’s underneath everything you see, and we are proud to have collaborated with the Roca brothers on this exploration. Like the London soul, our single malt whisky, matured in its unique sherry-seasoned oak casks, delivers rich complexities, harmonious flavors and vibrant aromas.”

The whisky is presented in a beautiful box featuring an intricate engraving design representing the map of London. The red detailing pays homage to the city’s trademark red-brick buildings. As well as the whisky, the box houses a book that tells the story behind the single malt and includes stunning photographs of the city.