When the US Naval Forces vacated Twenty Grosvenor Square in 2007, they meticulously cleared the eight-story building to ensure future owners would not stumble across old secrets. The only evidence of its 68-year occupation was a mosaic of the famous crest set securely into the floor. 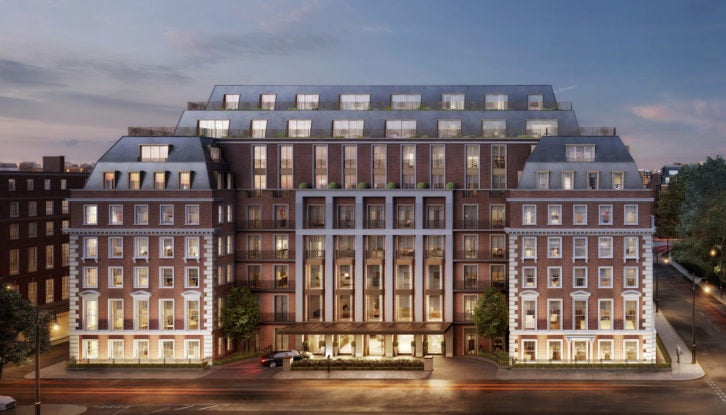 Keen to salvage this tangible piece of heritage, Finchatton, the renowned property development and design firm behind the property’s repurposing, went to great lengths to remove and restore it and have transformed it into a huge decorative table.

That table now sits proudly on the lower floor of one of London’s most exclusive new addresses and the world’s first standalone private residences from the luxury hotel and resorts chain, Four Seasons.

Following an extensive refurbishment, the property is mere months away from completion and the majority of its 37 residences have already been sold. There has been a lot of interest from US buyers, who are keen to own a piece of their country’s history – General Dwight Eisenhower orchestrated the D-Day landings from here during World War II. 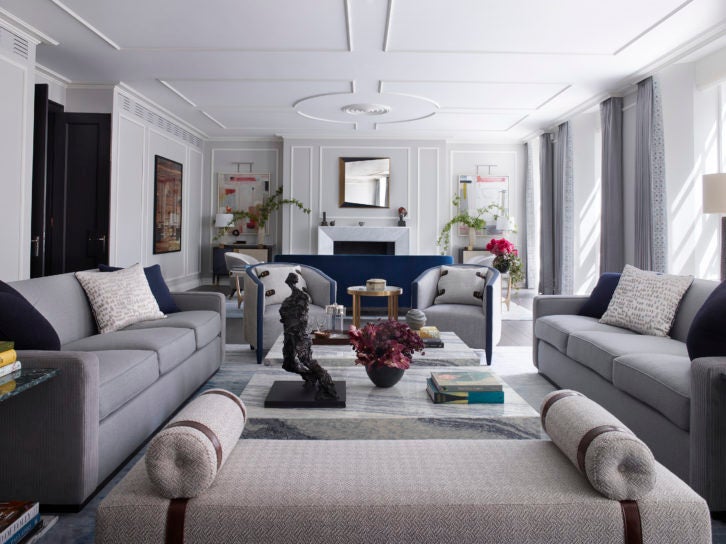 The reception room in Apartment 1.01

The mission for Finchatton was to create a property that perfectly combines the best of Four Seasons services and private ownership. Entering the building, concierges are on hand almost immediately while the high ceilings and a dazzling glass pendant give a quintessential Four Seasons feel to it.

I am first taken down to the lower levels to explore the wealth of amenities on offer. Despite moving several levels below ground, there is always a sense of natural light. This is by no means an accident. The ceilings remain high and light levels have been specifically curated to mimic that of a ground floor building. Experience the Luxury of Hawaii’s Kona Coast at Hokuli’a Inside the First Climate-Neutral Canal House Inside One of Beverly Hills’ Most Prestigious Addresses

A 25m vitality pool is surrounded by a beautiful stone wall decorated with cherry blossom. This is a staple feature in many Four Seasons and is reflected with the hand-painted wallpapers used in a number of the apartments. Also located on the lower floors is a gym stocked with the very best equipment, a temperature-controlled wine cellar, a treatment room, an 18-seat cinema and a crèche for young children. 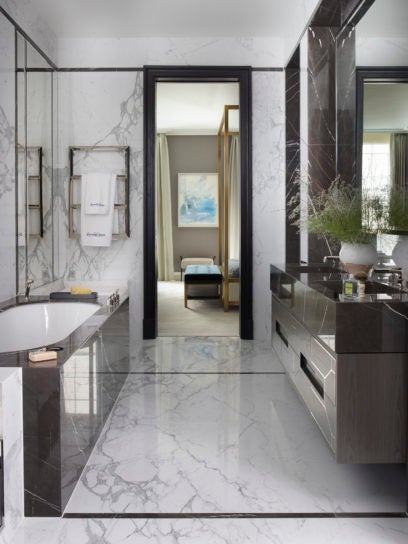 The bathrooms are lavished with the finest Italian marble

We are first shown Apartment 1.01, a 5,796 square-foot. five-bedroom apartment on the first floor and one of the biggest in the property. Offering views over Grosvenor Square and of the former US Embassy, the main living areas are flooded with light even on a cloudy day.

All furnishings have been selected for their quality and British manufacturers have been used where possible. One place filled to the brim with imported goods in the bathroom, which is lavished with the finest Italian marble.

For those interested in the history of the building, Eisenhower’s office took up the whole of the first floor during World War II, meaning the future owners of this apartment will be sitting where the general once sat.

We move onto Apartment 4.03, which at 3,563 square-foot is noticeably smaller than the previous one. However, it still feels well-appointed and its position in the corner of the building offers a very defined sense of space. Again, the large windows welcome light in throughout the day and offer views across the historic square.

The interior is very much of the 21st Century. The living areas are open-plan. We flow effortlessly from the sitting room into the kitchen and dining areas, offering a spacious feel despite its smaller footprint. Mirrors and other reflective materials have been cleverly placed to give the perception of even more space.

Moving back down to the lobby, it is clear that the designers and architects from Finchatton are passionate about the project. The building has been exquisitely restored and points to a new and exciting future for this most exclusive corner of London. 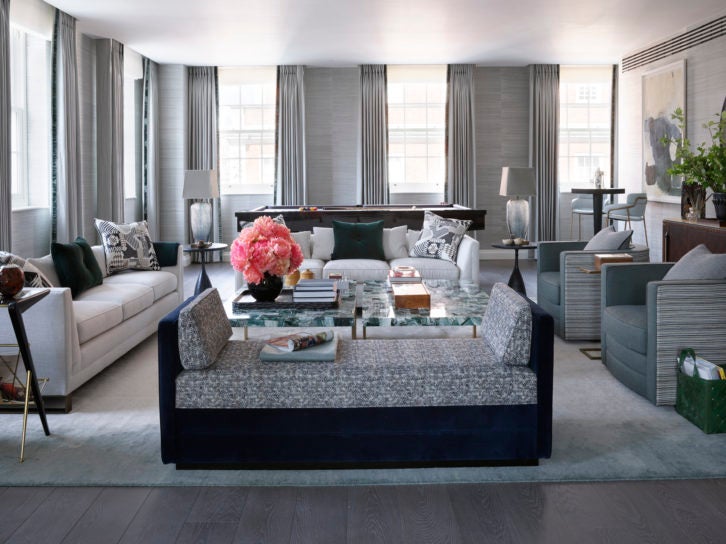 The reception room in Apartment 4.03