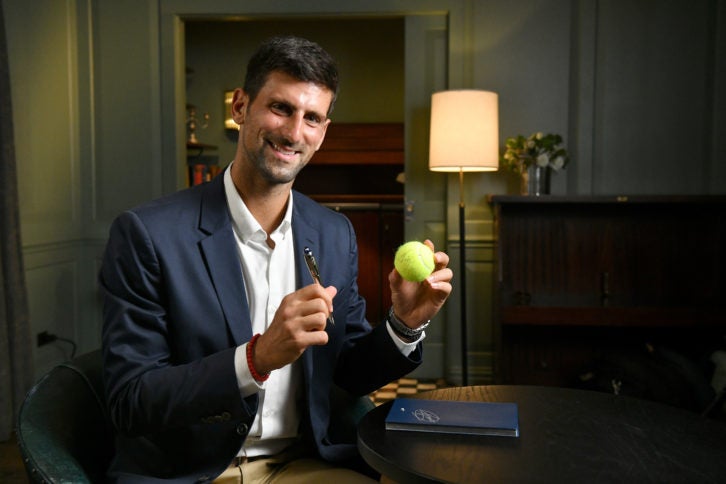 To celebrate the first-ever partnership, Montblanc created a special-edition set that includes a StarWalker Metal Fineliner and Notebook #146 Indigo Blue, both inscribed with Novak Djokovic’s signature. There are only 300 sets available, and all proceeds will benefit Djokovic’s foundation.

Aside from tennis superstardom, Djokovic is known for his philanthropy work.

“The [Novak Djokovic Foundation] was founded in 2007, and for several years we were mostly focused on education, but we were also trying to help in various ways,” he said in New York on August 21 during the official reveal of the collaboration. “In 2011 we partnered up with UNICEF. They provided us a data which was quite staggering: 55 percent at the time of children in Serbia were not attending any preschool programs. So that was quite alarming. It was several different reasons: cultural reasons, financial reasons and just the lack of available space. We started addressing that, as it is a very important segment of growing up over of one child’s life.”

Through his foundation, they have helped rebuild kindergartens in Serbia and partner with local communities, plus partnerships with international institutions, such as World Bank. 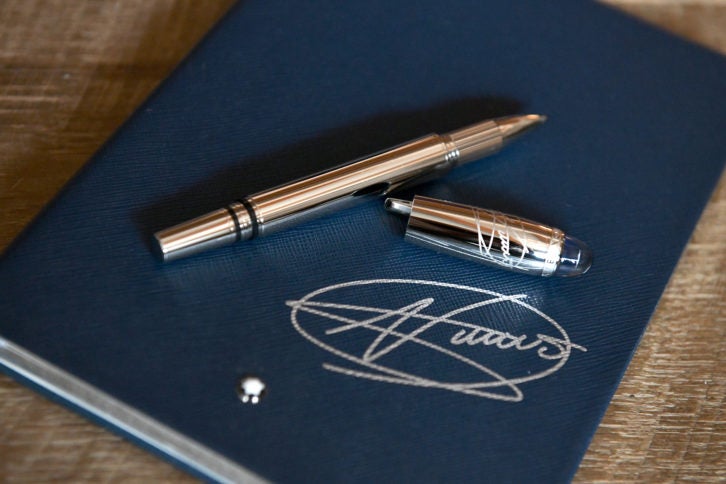 The partnership with Montblanc was organic for Djokovic, who has been using Montblanc writing instruments for years to journal.

Valentine’s Day 2023: Luxury Gifts for Him

“Both my wife and I have been using Montblanc writing instruments for years, and I love the roller,” he says. “That’s my favorite. And my wife has a huge collection of a lot of Montblanc writing instruments, so when we established the first interaction and communication with Montblanc we were both very excited and we were very happy that Montblanc recognized the mission and a vision of our foundation and what we have achieved so far in the last ten years. That’s how the partnership came about because Montblanc has been very active in supporting worldwide education programs, so our foundation is the platform and sort of the central channel through which Montblanc as an institution can support education around the world.” 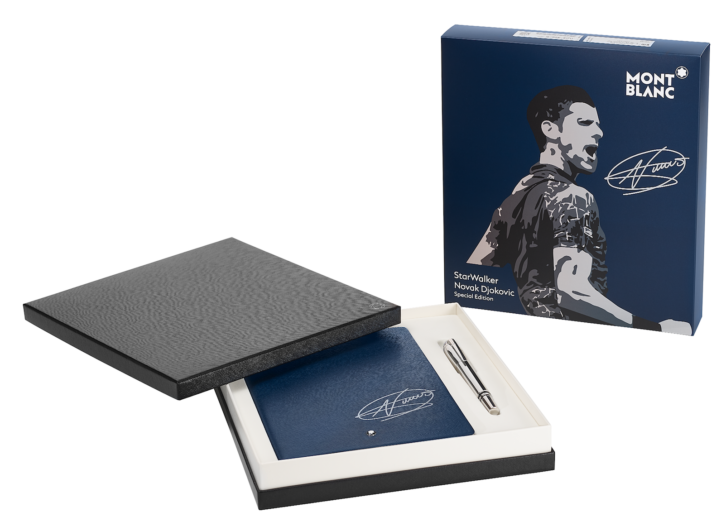 “We were delighted to learn that a true sports legend like himself keeps a daily journal,” Baretzki says. “His passion towards empowering our youth through education goes hand in hand with our maison’s values to encourage individuals to leave their mark in this world. We are happy to partner with Novak’s foundation, helping to provide children with the tools that will support them to achieve their full potential so no dream can seem impossible, no matter the circumstances.”

Djokovic’s journaling has also played an important role in his tennis career and has ultimately made him a stronger athlete. He says: “I go through highs and lows [during] two hours on the tennis court. In terms of emotions and there is so much happening so it is also the way for me to keep track of how I feel how can I improve my performance and be able to connect with the world.”

As an athlete, that is something he includes in his charitable and educational programs. “Sport is very close to my heart, tennis in particular, so I know that that sport can help so much with physical development, but also the mental and emotional development of a child,” he says. “I think it’s truly is important for overall well-being. But it’s also very important to balance it out with education and to properly invest. I think it’s a combination of both really.”

Novak Djokovic Special-Edition Set, $740, montblanc.com and for more information on how to support his cause, visit novakdjokovicfoundation.org