We have therefore selected the city’s coolest bars, where the well-heeled of Milan sip their aperitifs, and the night clubs that attract the ‘it’ crowd. Milan is also a city rich in the history of opera and performance where a trip to one of the famous theaters is an unforgettable experience.

This sophisticated venue changes throughout the day.

The stylish restaurant serves an elegant fourcourse Italian menu, but after 11pm, Lotvs starts its ‘After Dinner’ bar where famous disc jockeys play tunes to a classy crowd sipping cocktails in the art deco lounge. This multi-purpose club, with its high quality service and chic interior, makes Lotvs an ideal destination for an appetizer, dinner, after dinner drinks or a late-night dance. Any area of Lotvs can be hired for private events accompanied by the club’s trained staff. 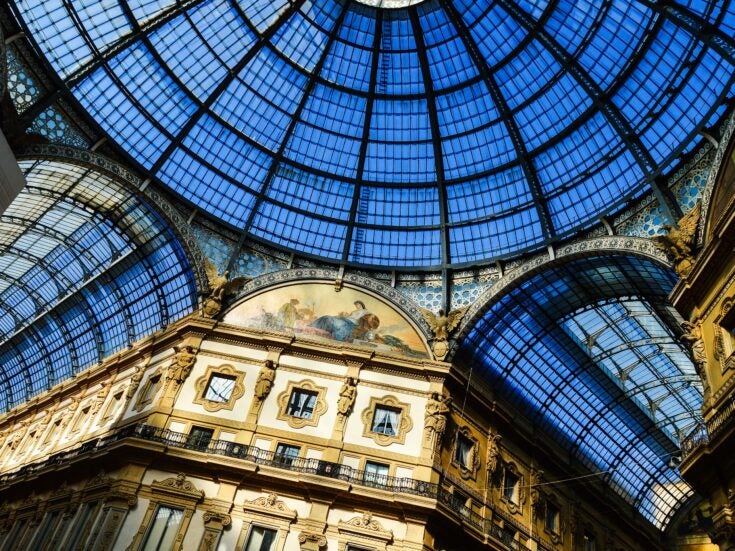 An ideal bar for those seeking peace and exclusivity that leads onto the Bulgari Hotel’s stunning private garden.

Il Bar is sleek and modern on the inside and separated from the bright garden by huge floorto- ceiling windows, so this spectacular exterior dominates the room. As a result of the view, the chic black oval bar and the unique cocktails, Il Bar is often frequented by Milan’s fashionable crowd. The restaurant menu is also available here for those wanting to merge cocktails into dinner.

This futuristic space located inside the Torre Branca tower in the Parco Sempione is the brainchild of the eclectic designer Roberto Cavalli.

The restaurant and bar are excellent places to spot celebrities and Milan’s fashion set lounging on zebraprint sofas. The décor is like none other, reflecting Roberto Cavalli’s extravagance: the restaurant is at the center of a vast raised steel structure.

One of the most renowned fashion bars in Milan, H Club>Diana gives no feeling of being located in the Sheraton Hotel or even the city center.

With a garden lounge and art-nouveau interior many of Milan’s great and good flock here for traditional aperitifs.

Days could be spent exploring Milan’s historic churches, but none in quite the same way as Gattopardo.

This beautiful church has been revamped into a bar, a disco or a venue for a party of your own. The restoration has preserved much of the originality: a vast crystal chandelier hovers above a dance floor that can double as a dining room seating up to 350 people or a theater accommodating 120 guests. For most of the week, however, Il Gattopardo Café is a nightclub attracting many of Milan’s party goers.

In a nightclub named after the most fashionable icon around today, you can expect to see Milan’s glamorous and well-dressed crowds.

Located below the Amani/Nobu restaurant, this club mirrors the modern chic decor of its neighbor, only it is equipped with an illuminated bar, dance floor and some of the finest DJs around. The space is also available for private rental, complete with party organizers, to those wanting to throw their own party.

From operas by Verdi and Puccini to ballets like Swan Lake and symphonic concerts, La Scala, with its first opening dating back to 1778, is the most spectacular place in which to experience both debut and original works.

To make the most of your time at this world famous theater book a private box adorned with red velvet and golden architecture – it’s the most luxurious way to enjoy the performances.

Franco Parenti is for those seeking more contemporary performances than those featured at La Scala.

The venue itself, having just undergone an extensive restoration, is extremely modern using state-of-the-art lighting and natural materials. A calendar of diverse events, including concerts, film festivals and conferences is set for 2011 ranging from traditional to avant-garde.