As winter sets in, pay a visit to one of the UK’s most celebrated country house hotels. Here’s our pick of the best winter retreats from London. 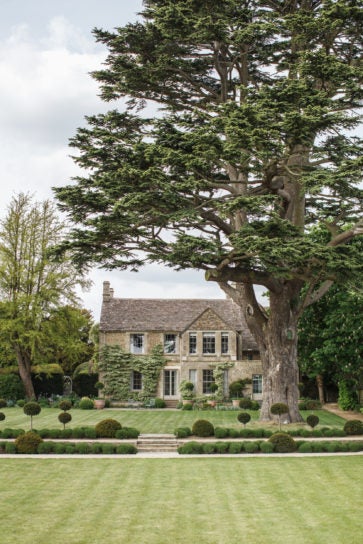 Originally a cooking school, then boutique hotel, and now with a newly launched spa, Thyme is a restored manor and farm in the idyllic Cotswold countryside built on a love for the land, food and entertaining. This along with the property’s heritage and a focus on conservation define the destination Thyme has become. In addition to Thyme’s manor house, the estate encompasses a collection of restored 17th-century farm buildings and cottages, forming a hamlet the hotel likes to call ‘a village within a village’. Here you’ll find A Meadow Spa, which uses Aurelia Probiotic Skincare products; the original Thyme Cookery School; The Ox Barn restaurant headed up by chef Charlie Hibbert; and 31 Caryn Hibbert-designed, botanical-inspired guestrooms, which are spread across Thyme’s various buildings. All of this sits on a 150-acre farm with kitchen gardens, ducks, chickens and two flocks of sheep, and situated on the border between Oxfordshire and Gloucestershire, it’s just two hours from central London. 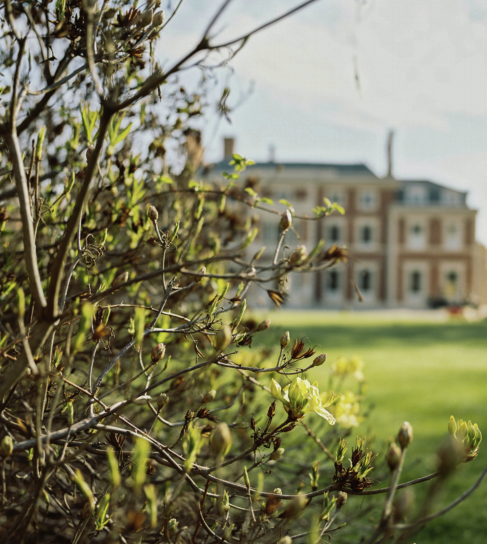 Since opening in September 2018, this country house hotel has garnered glowing reviews. The recent launch is the result of many years of restoration and planning. Now the Georgian manor is home to a collection of guestrooms, including six sprawling signature suites, placing the focus on natural materials and craftsmanship, along with The Little Bothy Spa where treatments incorporate ingredients from the apothecary garden, and the two cozy restaurants Hearth and Marle. You’ll also find a fitness studio by Bodyism, the sophisticated Moon Bar and a 67-seat screening room. The manor sits on a 400-acre estate of meadows and woodland, with two lakes, orchards and a biodynamic farm. Just over an hour from London, staying here places you in the heart of the Hampshire countryside where you can set out on a hike, go fishing and horseback ride. 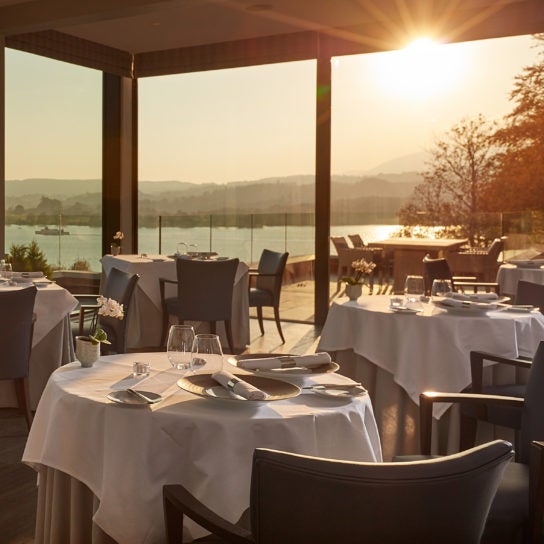 Not only is the Samling situated in one of the UK’s most picturesque regions, the Lake District, it’s also tucked into its own pocket of land, right on the shores of Lake Windermere. On an estate covering 67 acres, the hotel is surrounded by woodland and greenery, and a wealth of kitchen gardens, orchards and beehives where ingredients for the restaurant are sourced. This restaurant is one of the hotel’s great draws; it’s here that chef Peter Howarth and his team come up with creative menus highlighting these seasonal, locally sourced ingredients. You can tuck into this celebrated cuisine while gazing out over the lake and gardens. These views are also a focal point in The Samling’s signature suites, which are aptly named after locations within the famously scenic region. The hotel is around three and a half hours from London and well worth the journey – the lakes and mountains are perfect for winter activities. 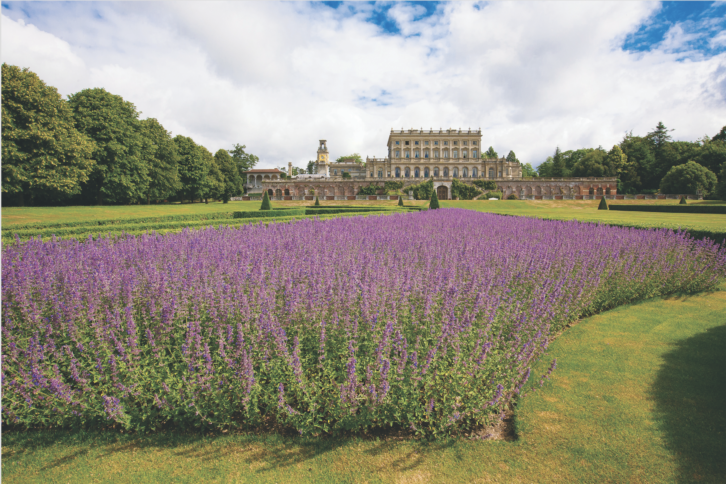 A National Trust-owned estate, Cliveden House is every bit as grand as you’d imagine, and with history going back to the 1660s, it has quite a few stories to tell. Paying homage to this history, the hotel named each guestroom after a prominent former guest; you could stay in the antique- and art-filled Prince of Wales suite or opulent blue and gold Lady Astor suite. This grandeur flows through to the chandelier-adorned award-winning restaurant by André Garrett, where tasting menus highlight fresh local ingredients, and the more casual Astor Grill, which is located in the old stable block. Unwind in the garden-enclosed Cliveden Spa and get outdoors to explore the sprawling gardens overlooking the River Thames – there’s even a giant maze that was built from 1000-year-old trees in 1894. The hotel is just over an hour from London. 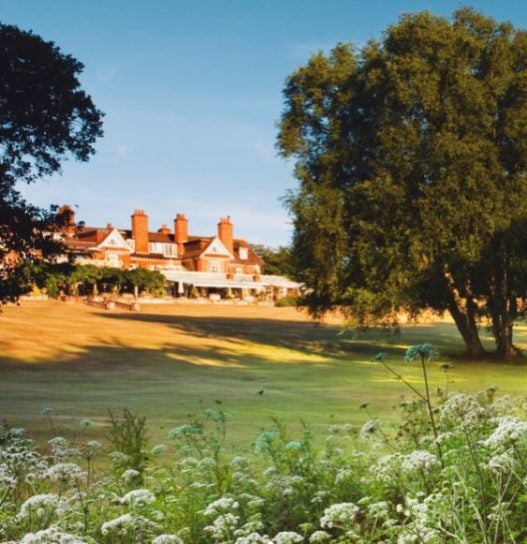 This five-star country house hotel on the edge of the New Forest lays claim to a series of awards for combining its bucolic setting and cozy rooms with a superb spa and exceptional dining. Much of the focus here is on the culinary offering. The garden’s herbs and vegetables supply the kitchen year-round, guests are given masterclasses in the renowned Cookery School, and fine dining plates are served up in the Dining Room. While away a wintery day with the Dining Room’s Marryat Afternoon Tea (named after naval officer, Captain Marryat, who wrote his novel, The Children of the New Forest, here), soaking up the warmth of the sauna and steam rooms in The Spa, and venturing out into the 130-acre estate’s woodland, parkland and gardens. 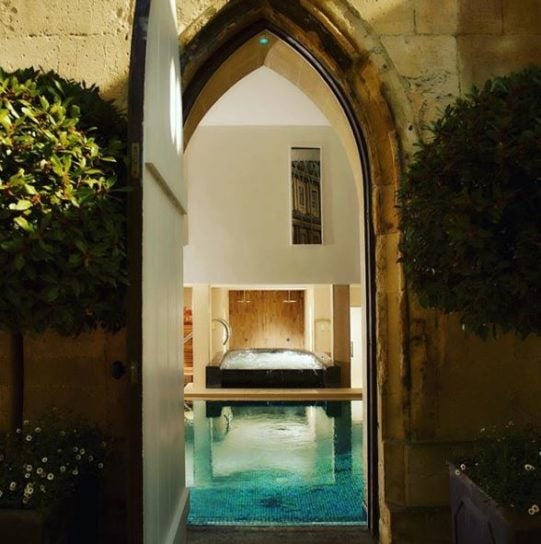 Known for its Georgian architecture, Roman baths, and surrounding countryside, Bath is among the UK’s most captivating cities. The Royal Crescent Hotel & Spa is a celebration of its surroundings, taking up two of the Georgian townhouses in Bath’s famous Royal Crescent. Inside, this heritage is combined with modern luxury, from the cozy guestrooms and 11 elegant suites to award-winning Dower House Restaurant, the Montague Bar & Champagne Lounge, and The Spa & Bath House with Taittinger Spa Garden. The hotel’s townhouses and additional buildings are backed by private gardens, and staying here means you’re just a short stroll from the center of town.

Looking ahead: The Langley Buckinghamshire

This manor house hotel by Marriott is set to open February 2019. The manor lies within a sprawling estate of former royal hunting ground landscaped by the legendary landscape designer Lancelot ‘Capability’ Brown. The house itself is being redesigned by Dennis Irvine Studio, with its rooms and suites spread across the main house and Grade II listed outbuilding, The Brew House. The property is going to have an extensive spa with thermal facilities and an indoor and outdoor pool, a state-of-the-art fitness suite, and a signature restaurant. More information is yet to be released, but with 300 acres of parkland and close proximity to Windsor and Eton, we’re sure it’s one to watch in the new year.