Its list of lengthy superlatives include: first-ever Hyper-GT and most aerodynamically efficient, perfectly symmetrical and fastest-accelerating McLaren. A proclamation: The Speedtail is a testament to the current and future technological accomplishments at McLaren.

Speedtail clocks zero to 186 mph in 12.8 seconds (3.7 seconds faster than the P1). Its delta seating configuration means the driver is front and center — literally — with a passenger behind each shoulder. 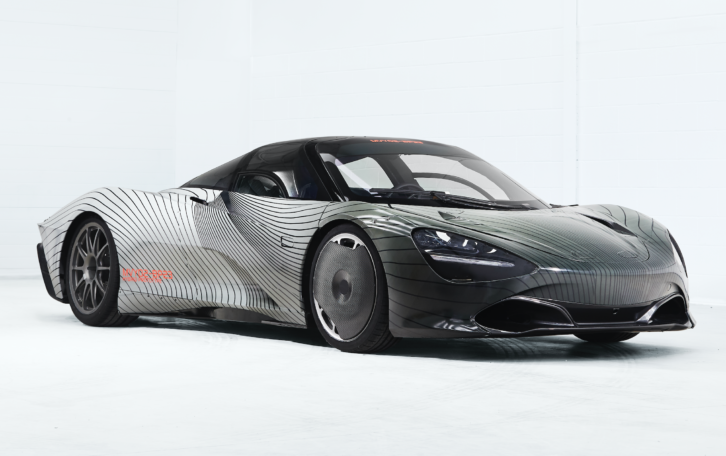 Some suggest the interior triangular layout is an homage to the aforementioned P1, while others believe it’s the only way to achieve a terminal velocity of 250 mph. Either way, the shape of Speedtail when viewed aerially is that of a teardrop, “the most efficient shape found in nature,” according to Ian Howshall, McLaren’s Ultimate and Super Series Product Manager.

Inside the Hyper-GT, a trio of high-resolution digital screens display everything from navigation to infotainment, while the engine start button and power-operated door controls (since it’s rather tricky to close a door when you’re sitting in the middle of the car) are housed in the headliner.

This Electric Mercedes-Benz Pagoda is Fit for a Green Future

From nose to tail, McLaren’s largest concern is the uninterrupted flow of air, which is why the body of Speedtail can flex. Christened ‘active ailerons,’ portions of the tail can bend, reducing drag and aiding downforce at higher (read: faster) speeds.

Coined ‘titanium deposition carbon fiber,’ the body of the car features bespoke carbon fiber created out of 1,000 strands versus the normal 3,000. The result is smaller squares as well as the ability to customize, should the owner choose to weave precious metals like gold or silver into the quilted pattern.

McLaren will produce only 106 editions of Speedtail, all of which have been pre-sold. Deliveries begin in 2020.

This article originally appeared in the summer issue of Elite Traveler.

The Most Exclusive Classic Cars in the World