Designed to handle high speeds and great distances in chorus, Grand Tourers function as both a bragging right and cornerstone for any car manufacturer. Possessing power, grace and beauty, GTs typically include enough seats for four passengers plus luggage, as well as the ability to pass anything that may interfere with its continent-crossing intentions.

Polestar began 25 years ago as a third-party Volvo racing tuner before assimilating in-house. The Swedish automaker refocused its energies to creating limited-edition Volvos. Fast forward to 2017, and Polestar is rebranded again, this time as a full-fledged automaker co-funded by Volvo and its Chinese owner Geely.

Its mission to construct performance electric vehicles in a purpose-built factory in Chengdu, China seems at odds with its launch product. But that’s the rub.

A profoundly atypical option in a crowded electric landscape, Polestar 1 is an absolute indulgence 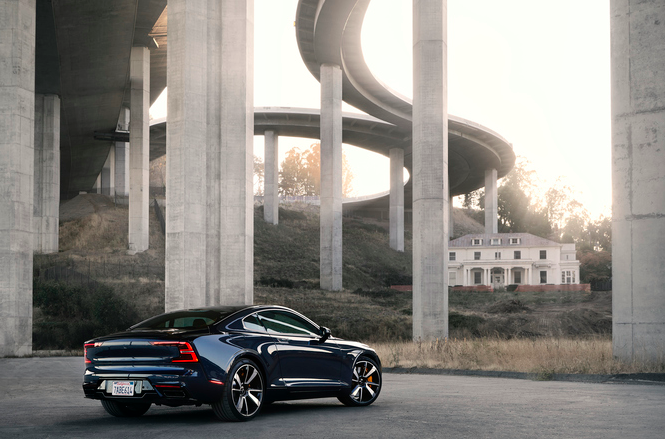 Polestar 1 is based on the Volvo Concept Coupe of 2013

Polestar would be an enigma had it not pulled a play from Tesla’s book: Unveil the brand with a limited-run premium vehicle before shifting to more mass-market offerings. Capped at 500 cars globally per year for three model years, the four-seater Polestar 1 is already a collector’s item. A profoundly atypical option in a quickly crowding electric landscape, the vehicle is an absolute indulgence.

Based on the Volvo Concept Coupe of 2013, Polestar 1’s resemblance to it proves uncanny enough to engender a double-take from passersby. While its hammer-like headlights allude to its Swedish beginnings, its concave grille, dramatically curved backside and subtle badging provide fresh visual cues.

At 5,170 lbs, Polestar 1 weighs more than a Chevy Silverado 1500, but with double the power. An impressive 619 hp hails from a 2.0-liter supercharged and turbocharged combustion engine that controls the front wheels, along with a duo of electric motors and a 34 kWh battery that commands the rear (a rather uncommon all-wheel drive).

Rather than working separately, the powertrain melds its two disparate energy sources. The result: four drive modes, with the fastest, Power, enjoying zero to 60 mph in a healthy 4.2 seconds. It’s possible to run the car on pure electricity, but that’s best left for traffic-filled city driving.