With much of Europe still embroiled in a fight against Covid-19, Watches and Wonders 2021 was limited to a digital experience in Geneva last week. That did not stop many of the world’s biggest brands from launching new creations. On the contrary, almost all the major players in Haute horology brought something significant to the table and there is more to come in Shanghai this week. Here, we select some of the most exciting new watches revealed so far. 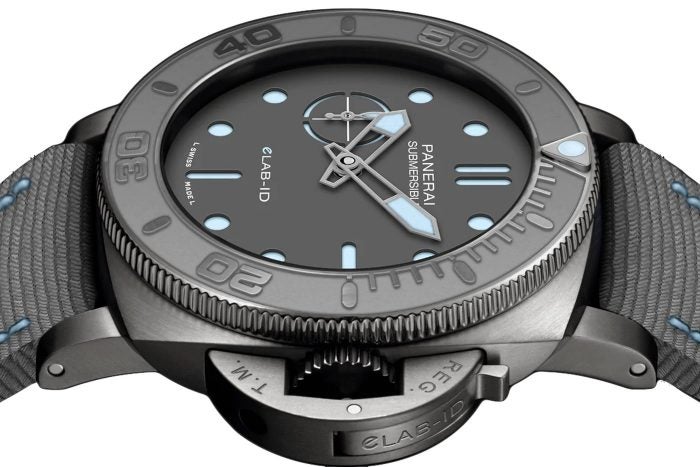 Many luxury watchmakers make big claims about reducing the industry’s environmental impact, but few are doing more than Panerai. The Italian company, originally a producer for the army, is now on a mission to save the world. Its new Submersible eLAB-ID takes recycling to a new level, at least in haute horology. Panerai claims the watch is made with 98.6% recycled materials by weight, more than any watch ever made. The case, the dial and the movement bridge are all crafted from EcoTitanium, an innovative material made of 80% pure recycled content. The material was also seen in the recent Submersible Ecopangaea Tourbillon. The gold hands and sapphire crystal also come from recycled materials. Underlining just how committed Panerai is to sustainability in watchmaking, the company has shared its list of suppliers in order to encourage its competitors to follow in its footsteps. The watch will be available in 2022 and is limited to just 30 pieces. 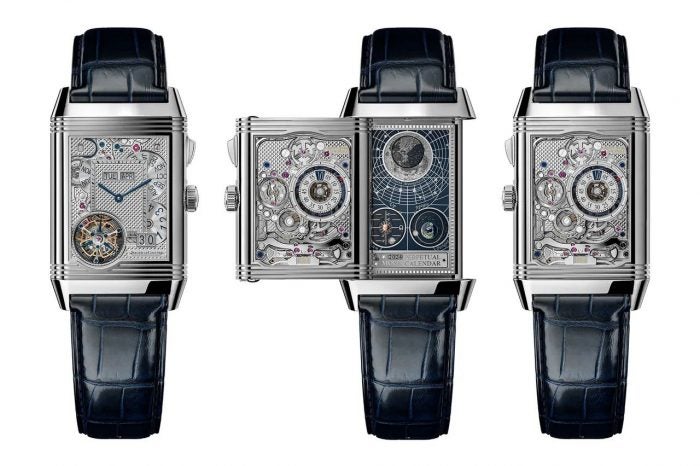 Jaeger-LeCoultre was the talk of the virtual chatrooms after unveiling the world’s first timepiece with four functional faces. A celebration of its iconic Reverso model, this is the most complex watch the Swiss watch manufacturer has ever produced. This new Reverso celebrates the 90th anniversary of its first incarnation, a reversible-dial timepiece that allowed wearers to conceal the watch face to prevent damage. It was aimed at army officers and polo players to protect its glass back, but we can’t see many of the Reverso Hybris Mechanica Calibre 185 making it to the battle or polo field any time soon. In total, the watch boasts 11 different complications, including a flying tourbillon and three different northern hemisphere moonphase indications. Jaeger-LeCoultre will produce just 10 of the watches, each one coming with its own box that will automatically calibrate its differing complications. With its price set at approximately $1.6m, only a handful of people in the world will be able to think about buying it. For the masses, Jaeger-LeCoultre also released the Reverso Tribute Small, a beautiful two-faced watch that is more in keeping with the original (and significantly cheaper), available at Mr Porter. 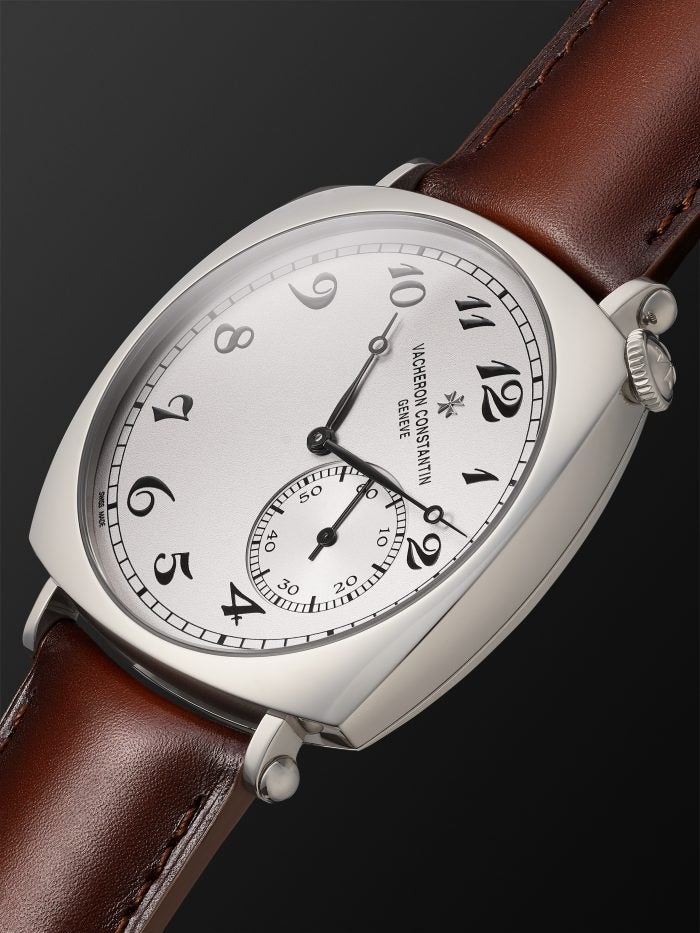 We look back on the Roaring Twenties fondly. A decade spent celebrating recovery from the Great Depression and the end of World War One. Some economists will have you believe we’re heading into a similar period of economic bliss, so you better get a watch fit for purpose. Luckily, Vacheron Constantin has just the piece. The luxury watchmaker has released a trio of its popular Historiques American 1921 design, marking the 100th anniversary of the original Reference 11032 watch. The dial set at a 45-degree angle sums up the quirky tastes at a time when individualism was really starting to take off in the US. The style was particularly popular with drivers, who no longer had to turn their wrist to see the time at the wheel. The watch is available in white gold at 40mm and 36.5mm, but the avid collector will have their eyes on the 40mm in platinum, limited to 100 pieces. A version is also available on Mr Porter. 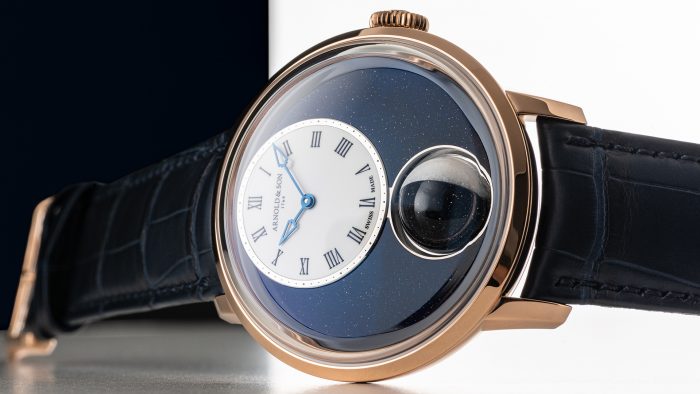 Arnold & Son is best known for its monphase watches, so it makes sense that it is the one to produce the largest 3D moon ever seen in a watch. The Luna Magna is minimalistic in its function and style, but let that takes nothing away from the finished product. It is understated, yet simultaneously eye-catching. The large 3D moon gently rotates, gradually revealing more of the moon as it drifts towards maximum exposure. With a 12mm diameter, half of the moon sits above the dial. To make it look as if the moon was sitting within the cosmos, Arnold & Son combined white marble with blue aventurine glass. The result is a deep, star-speckled look. The watch’s A&S1021 movement is visible through a sapphire display caseback and the intricacies offer as much wonderment as the watch’s face. 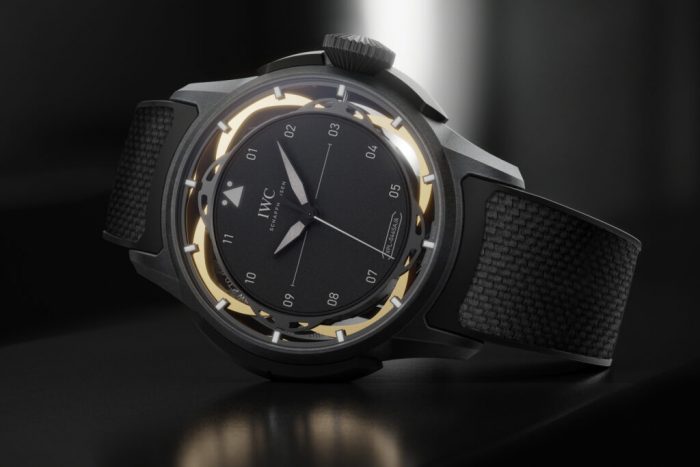 It is always hard to remake a classic, but that is exactly what IWC Schaffhausen has done with its latest version of the iconic Big Pilot watch. This Shock Absorber XPL is the first watch to feature the company’s SPRIN-g PROTECT shocking absorbing system, which took eight years to develop. The ambition was to create a design that could withstand impact well beyond the industry standard. Think of this as the equivalent of a deep dive watch that can go deeper than any human; deeper, in fact, than any ocean on earth. There’s no reason for it, but impressive nonetheless. Standard shock-absorber watches are tested from 25-times the force of gravity (25 Gs) all the way up to 5,000 Gs for the very best. But the Big Pilot XPL has been tested up to 30,000 Gs. It is a genuine gamechanger. The SPRIN-g PROTECT system essentially suspends the timepiece’s movement inside the case, allowing it to float and protecting it from external impacts. IWC will produce 30 versions of the watch at a rate of 10 per year over the next three years.

Louis Vuitton is synonymous with luxury fashion, but not necessarily with Haute horology. That changed at Watches and Wonders 2021 after the fashion powerhouse revealed the stunning Tambour Carpe Diem timepiece. The watch houses four automata to create a striking time-telling experience. A press of the snake’s head at the two o’clock position whirls the complications into action. The snake’s tail points towards the minutes while its head moves sideways to reveal the hour. The skull starts grinning, revealing the world’s “Carpe Diem” inside its mouth. The whole experience lasts 16 seconds – ironic when the theme of watch is all about making every second count. But the watch is equally fun as it is menacing. While your children might marvel at pushing the magic button, this is far from a toy. The design took two years to develop and each timepiece 320 hours to assemble with the enameling alone taking 50 hours.