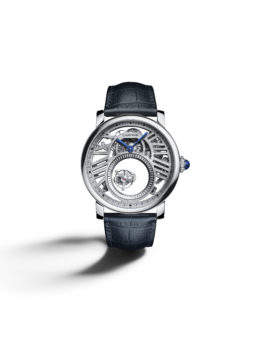 Since unveiling its now-iconic mystery clock more than a century ago, Cartier has continually innovated and miniaturized the captivating movement. About five years ago, Cartier revealed its first in-house mysterious double tourbillon movement, where the tourbillon escapement is the mystery component, seemingly suspended in midair. Now, it unveils the next stage in its evolution. Powered by the new 9465MC caliber, the double flying tourbillon completes a rotation every 60 seconds, while the tourbillon cage also rotates every five minutes, creating a beautiful balancing act. Additionally, the new watch combines the mystery concept with skeletonization. This new watch features a skeletonized movement The bridges of the skeletonized movement form the Roman numerals. The manual- wind movement, which is endowed with the Hallmark of Geneva, consists of 286 parts that are finely finished by hand and visible through the sapphire caseback and crystal. The 45mm platinum watch is equipped with 52 hours of power reserve. It is being built in a limited edition of just 30 numbered pieces.