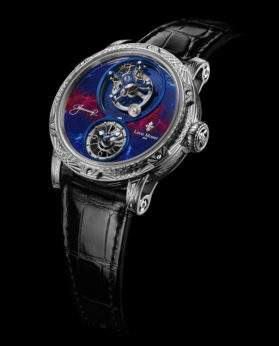 Inspired by the adventurous early era of space exploration, Louis Moinet’s SpaceWalker watch is dedicated to the now 84-year-old Alexey Leonov, a pioneering cosmonaut who in 1965 became the first man to spacewalk. He also initiated one of the most important gestures of the era: an outer-space handshake with NASA astronauts in 1975 during the Apollo-Soyuz mission, the first joint space mission between the Soviet Union and America at the height of the Cold War. The timepiece features an oversized satellite tourbillon at 12 o’clock that represents Leonov’s ship on his Voskhod 2 mission. The small diamond revolving around the tourbillon symbolizes Leonov walking in space. The aventurine background recalls the starry sky, and the dial uses a top-secret, graphic material to depict a nebula of celestial colors. Louis Moinet will make 12 engraved watches, representing the 12 minutes Leonov walked in space, in 18K white gold or 18K rose gold.