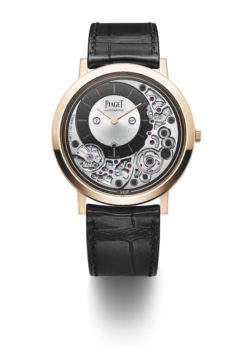 For more than half a century, Piaget has been a leader in ultra-thin movements. This year is no exception, as it demonstrates its mastery with the Altiplano Ultimate Automatic 910P watch; measuring just 4.30mm thick when cased, it is one of the thinnest mechanical automatic watches in the world. Taking its design cue from caliber 900P (unveiled in 2014) that used a revolutionary new construction joining the case and movement as one piece, the new patent-pending movement in the Altiplano Automatic is the caliber 910P. Three years in the making, it merges the movement and the watch exterior into one whole, wherein the case serves as the mainplate with 219 super-thin components affixed to it. The watch, which measures 41mm in diameter, is crafted in 18K gold and features an off-center display of hours and minutes. This year, Piaget also unveiled the Altiplano Ultimate concept watch — a world record measuring just 2mm.