With Elite Traveler’s eagerly awaited database of the world’s top suites set to launch imminently, we have closely scrutinized the data to identify the most expensive hotel suites in the whole of France.

To produce our shortlist of five, we focused on the cost per square foot rather than price per night, meaning those that made the cut are truly the priciest when it comes to space.

Considering Parisian real estate is among the most expensive on the planet, it is hardly surprising that all five of France’s most expensive suites are located in the capital. Just short of a place on our top five was the Penthouse Suite at Hôtel Martinez in Cannes. Costing a staggering $56,500 per night, it is considerably pricier than any of the others, but it also offers a gargantuan 12,109 sq ft, making it by far the biggest French suite in our upcoming top suites database.

[See also: The Most Opulent Hotel Suites in the UK] 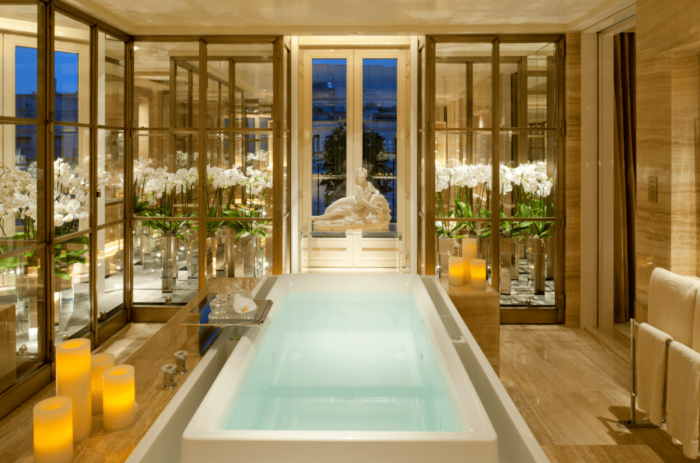 At $26,000 per night, the second-smallest suite on our list tops the rankings when it comes to price per square foot at $15.95. Beloved by A-listers, the Penthouse offers its guests a unique brand of French glamour just off the Champs-Élysées and comes complete with a dedicated personal attendant.

Without a doubt, the heavy price tag is partially down to the dreamy private terrace with sweeping views of nearly every Paris landmark you could think of, including the Eiffel Tower, the American Cathedral and the Sacré-Coeur Basilica.

Inside, the one-bedroom suite resembles a chic Parisian apartment, with details of silver, gold and cream, as well as glass walls encasing white orchids. The all-marble bathroom could arguably be one of the most sumptuous in the whole of the city, with a one-ton marble tub and breathtaking views.

To top it off, the Four Seasons’ three sought-after restaurants have five Michelin stars between them, the first hotel in Europe to earn such an honor.

A stay at Paris’s grande dame doesn’t come cheap, and the Ritz’s finest suite is no exception. Occupying the second floor, which was historically reserved for French nobility, the Suite Impériale is reached by private elevator. Step inside and you’ll feel like royalty yourself, and at $30,600 a night, so you should.

The newly refurbished suite is inspired by the decadent 18th-century royal court and includes a bedroom identical to that of Marie Antoinette’s at the Palace of Versailles. At 2,347 sq ft and adorned with gold, marble and elaborate carvings, the accommodation provides a uniquely immersive historical experience where visitors are transported to the grandeur of Louis XV’s France.

Guests can take full advantage of the hotel’s luxury amenities, including relaxing in the world’s only Chanel Spa, an homage to the hotel’s most famous resident, as well as sipping on dry Martinis at the legendary Bar Hemingway, just like its namesake. 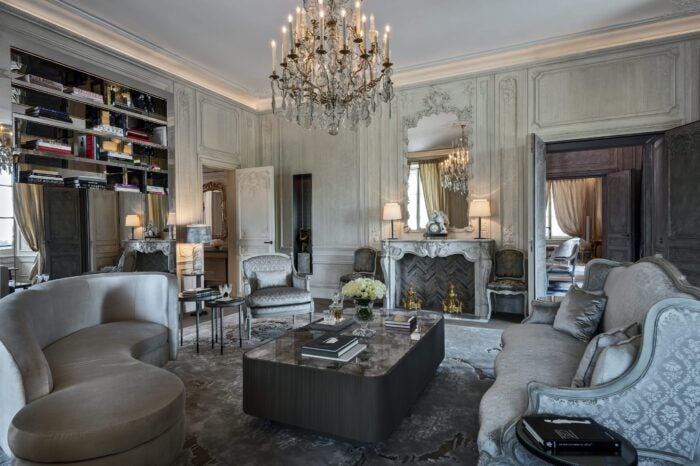 The largest suite on our list at 3,606 sq ft, Les Grands Appartements is actually two separate suites that can be combined to offer three bedrooms – more than any other in our top five. Naturally, all of this space comes at a premium, and at $43,987 per night as well as being the biggest suite, it is the most expensive.

The historic Hotel de Crillon underwent a four-year major refurbishment, reopening its famous Place de la Concorde doors in 2017 to much critical acclaim for its modern take on classical French opulence. The late Karl Lagerfeld was chosen to design Les Grands Appartements, which features custom furniture mixed with rare antiques and intricate design details. Lagerfeld personally selected everything in this suite, from the historical sculptures to the nuanced marble in the bathrooms (the bathtub is made from a single block weighing over two tons, double that of the tub at the Penthouse at the Four Seasons George V).

The suite comes with a dedicated butler, and several secret doors are included throughout the space, including one into the kitchen for a private chef to utilize so as to not disturb the guests. If you can tear yourself away from your suite, the hotel’s intimate one-Michelin-starred L’Ecrin is not to be missed. 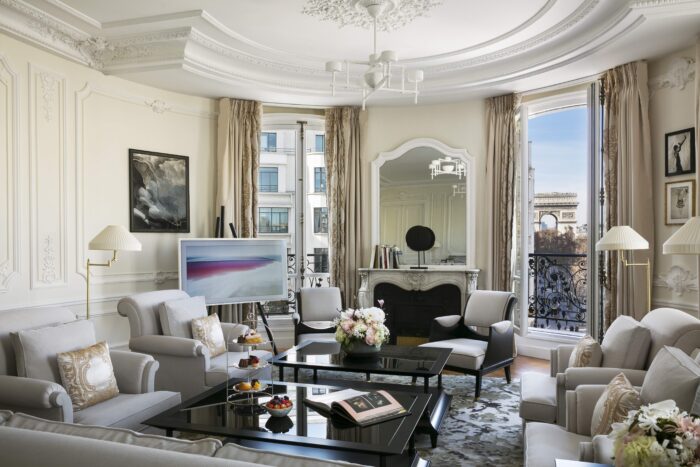 In terms of cost per square footage, the Arc de Triomphe Suite is the more expensive of the two suites to make our list from French-owned Hotel Barriere Le Fouquet’s. It is also the smallest of all five suites. However, if you are less concerned about space and more about price, you may be pleased to hear that the suite is the cheapest at $17,759 per night.

Despite being the most bijou, it is still much bigger than your average Paris apartment, and with one of the most famous postcodes in the city (it is located on the Champs-Élysées), you can expect to pay big.

Newly renovated by architect and interior designer Jacques Garcia, the light-filled suite stays true to its Haussmann roots, encapsulating crown molding, floor-to-ceiling windows and marble fireplaces. The balcony, which stretches from the dining room to the bedroom, offers epic views of its namesake, the Eiffel Tower and Paris’s most famous boulevard below.

Guests will be able to enjoy complimentary treatments at the hotel’s luxury spa as well as dinner at the renowned Fouqet’s restaurant, a Paris institution that has hosted some of the city’s most notable faces. 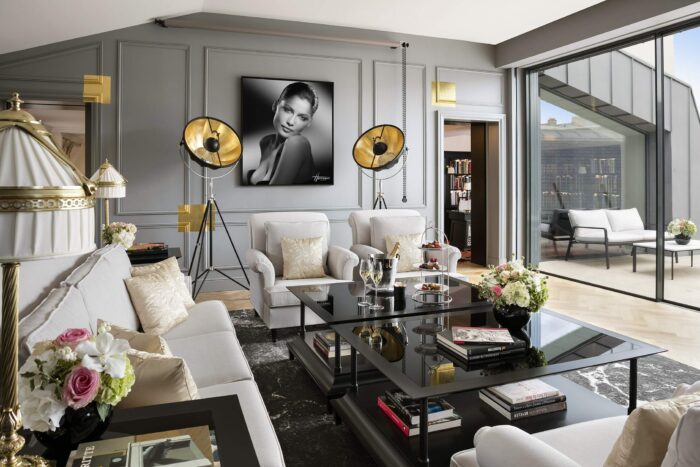 The Harcourt Paris Suite costs nearly $6,000 per night more than the hotel’s Arc de Triomphe Suite at $23,683 but offers better value when it comes to space at $10.77 per sq ft.

The 2,200-sq-ft apartment honors the hotel’s historic relationship with classic cinema and the famous French photography house Studio Harcourt. The black-and-white photos of celebrities and socialites that adorn the walls add a sense of old-school glamour to this top-floor penthouse. What’s more, the lounge turns into a pop-up photography studio, allowing you to join the likes of Salvador Dalí and Édith Piaf with your own Harcourt portrait. A truly unique experience.

The suite is decorated with shades of gray and gold, accented by touches of Harcourt red, while incredible views of the Arc de Triomphe greet you from the bedroom. The sprawling suite also includes a private gym, a 24-hour butler, a beauty salon and a terrace overlooking the hotel’s tranquil inner courtyard.

To submit an entry for next year’s Top Suites database, complete this online form.

[See also: The Most Discreet Hotel Suites Around the World]