Few countries have been hit harder by the Covid-19 pandemic than Spain. The country has had to cope with many tens of thousands of deaths and its people have endured one of the harshest lockdowns in the Western world. But now following months of hardship, the country is finally seeing light at the end of the tunnel. It may be a while before its major towns and cities fully open their doors to the world again, but there are many remote corners of the country that are perfect destinations for those seeking more privacy. Here, we take a look at some of the best remote islands in Spain offering sun, sea and spectacular sites far away from the tourist trails.

As the second-furthest west island in the Canary Island archipelago, La Palma can at times bear the brunt of the Atlantic’s fierce trade winds. But in the summer months, this 300-square-mile island offers the same temperate climate as its more popular neighbors Tenerife and Gran Canaria. The three volcanic craters responsible for this island’s creation make it a haven for hikers and nature lovers, who come to explore over 600 miles of marked trails and climb to the highest point on the island, Roque de los Muchachos (7,959ft). Experienced hikers can tackle the notorious GR 131 trail, a 48-mile route that includes all three of La Palma’s biggest peaks.

Those not interested in hiking will find plenty of alternative activities in the island’s capital Santa Cruz. This charming town offers a taste of what life was like for the long-standing inhabitants. Many of the houses have unique design elements that cater to the sometimes battering winds. You can also drive out of Santa Cruz and discover quaint villages that time has seemingly left behind. Beaches are more or less left to their own devices, guaranteeing a quiet spot if the weather allows.

Formentera is just a 30-minute ferry ride from Ibiza, but the two islands could not be further apart in terms of culture. While Ibiza has welcomed the hedonistic world with open arms, Formentera has actively tried to keep tourist numbers in check. There is no airport on the island and much of it remains undeveloped as a result. Formentera offers a glimpse at what life was like on the Mediterranean islands before tourism became its main business. The few people who live here cherish the island’s natural beauty and enjoy a slow and meandering lifestyle that has remained largely unchanged for generations. There are tourists, of course, and wherever tourists go, the industry will follow. Many do not venture further than the island’s capital San Francesc Xavier, where boutique shops and markets offer everything from handmade jewelry to local produce. 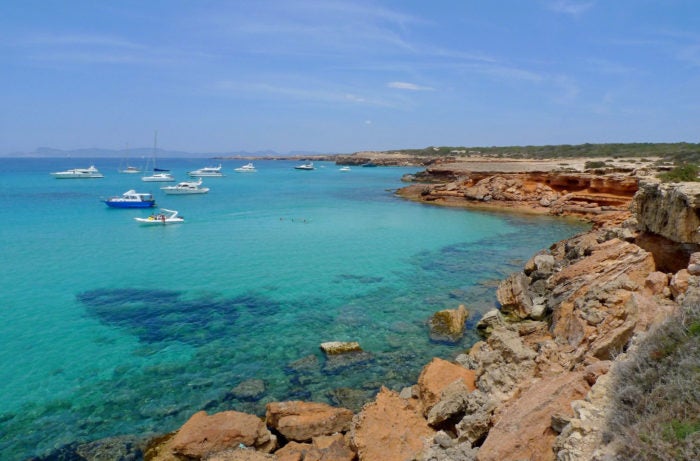 Sitting in close proximity to La Palma and just a 30-minute flight from Tenerife is the untouched paradise of La Gomera. This tiny 230-square-mile is, like La Palma, a hiker’s paradise. There are over 400 miles of unmarked trails and huge volcanic peaks reaching over 5,000ft to conquer. The island is a designated UNESCO Biosphere Reserve, meaning its natural areas are protected from development and perfect for nature lovers.

While the island does have an airport, it only operates flights to Tenerife and Gran Canaria, so it remains a haven for those seeking peace and quiet. The quaint towns and villages are perfect to meander through sunny summer days and there is always space on the island’s black-sand beaches. Thrill-seekers will revel in the island’s main tourist attraction, the Mirador de Abrante, a glass-floor platform protruding out of the cliff face over 2,000ft above sea level and the village of Agulo.

Located less than two miles from Lanzarote and visible in its entirety from certain viewpoints, La Graciosa looks as if it has forcefully broken away from its big brother. It is so close that a swimming race – El Río – from one island to another is held every year. The breakaway became official in 2018 when it was declared an official island of the archipelago. Although the status holds symbolic significance for the island’s 750 residents, the change has done nothing to spoil this seemingly forgotten world.

The 18-square-mile island looks sparse and undeveloped from Lanzarote, and to a large extent that is true (there are no paved roads on the island at all). It can become busy with day-trippers, but once the last boat leaves at dusk you can enjoy one of the most peaceful places in the Canary Islands. Even during the day, it does not take long to get away from the crowds. Just head out of the main town on one of the few dirt roads and you will soon find yourself alone with nature. With shallow waters, it is also a hotspot for diving.

El Hierro is the smallest, least developed and least visited of the eight main islands and is far more rugged than its bigger neighbors. It is located at the tip of the archipelago in the west and was once thought by sailors to be the end of the world. Today, it is more like the beginning of a brave new world – it holds the enviable status of being the first self-sufficient island in the world.

By harnessing the power of trade winds and its many waterfalls, El Hierro produces almost all of its energy needs through renewables. As well as revolutionizing its energy production, it has also installed a network of chargers for electric cars, banned commercial fishing, and a large percentage of its farms are organic. The result is one of the most sustainable communities on the planet and a shining example for countries to follow.

Visitors usually dock in Puerto de la Estaca and travel inland to the village of Valverde. From here, you can venture into the foothills and explore mile upon mile of trail to spectacular viewing points from which most of the island can be seen. Although it is still quiet, the island’s tourism is booming thanks to the growth in luxury isolated retreats. Take in the island’s end-of-the-world feel at the Hotel Puntagrand, one of the smallest hotels in the world. Perched on the end of a cliff, it stares out into the Atlantic Ocean beyond. 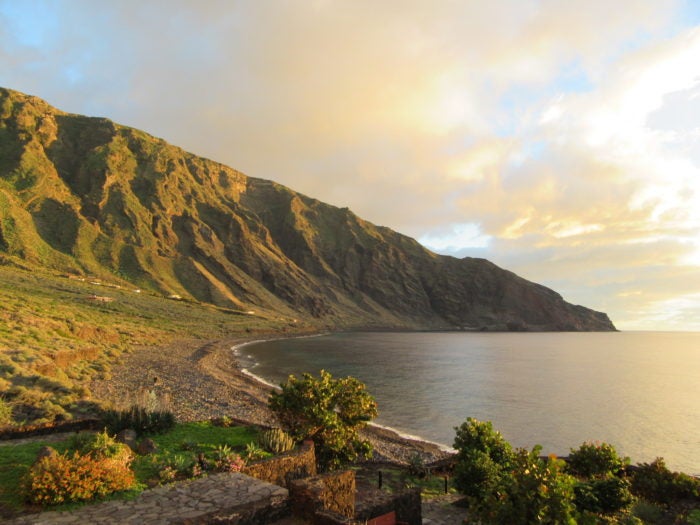