The most popular sport in the world comes to the biggest country in the world as Russia hosts the FIFA 2018 World Cup. Kicking off on the 14th of June, this world cup promises to draw the globe’s attention to Russia and will be a month long celebration of soccer. We give a breakdown of the most exclusive places to stay and how to guarantee you get the VIP match day treatment at every World Cup game this summer.

Although soccer is often billed as “the people’s game” it does not mean that you can’t enjoy the sporting spectacle in more refined settings. A selection of private suite and hospitality match packages have been launched for those who are able to splash the cash.

The luxury offerings include private suites, business lounges and club seating which offers category one seats and a private bar. These are the tickets to get to guarantee the best seats and unrivaled service from dedicated hosts. 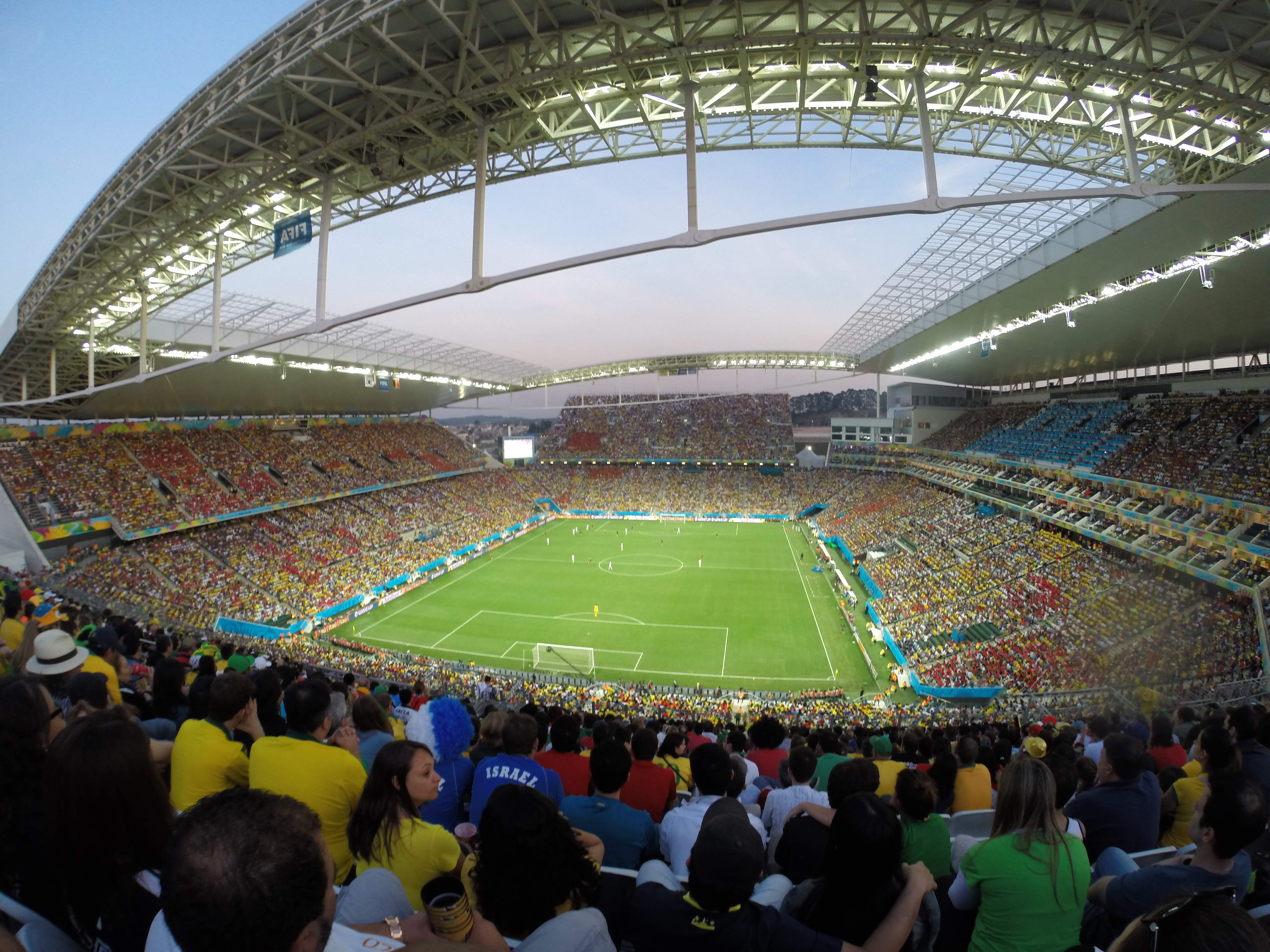 Private suites are the top tier offering and can accommodate eight to 21 people, depending on the stadium. Included in the price are freshly prepared food, premium drinks, hostess service and private seats located directly in front of your suite. The perfect choice for those looking to woo business partners or just enjoy the beautiful game from top notch seats.

The Tsarsky Lounge – the highest possible standard of soccer hospitality – will be available at every World Cup stadium and is reserved for the elite. Access to the lounge promises to get you gourmet cuisine, a luxury-brand drinks service and attentive hospitality.

The top private suite package for the final is on sale for $445,500 whilst the route to the final hospitality package is $2.8 million and comprises of 19 games including the opening game, final and both semi-finals. Access to the Tsarsky lounge starts at $4000.

Where to fly to

The 11 host cities are spread out over an area of 17 million km² so following your favorite team from game to game can be a complex operation. To simplify things we have selected the closest private jet terminals to each of the major stadiums to ensure you’re never late for kick-off. 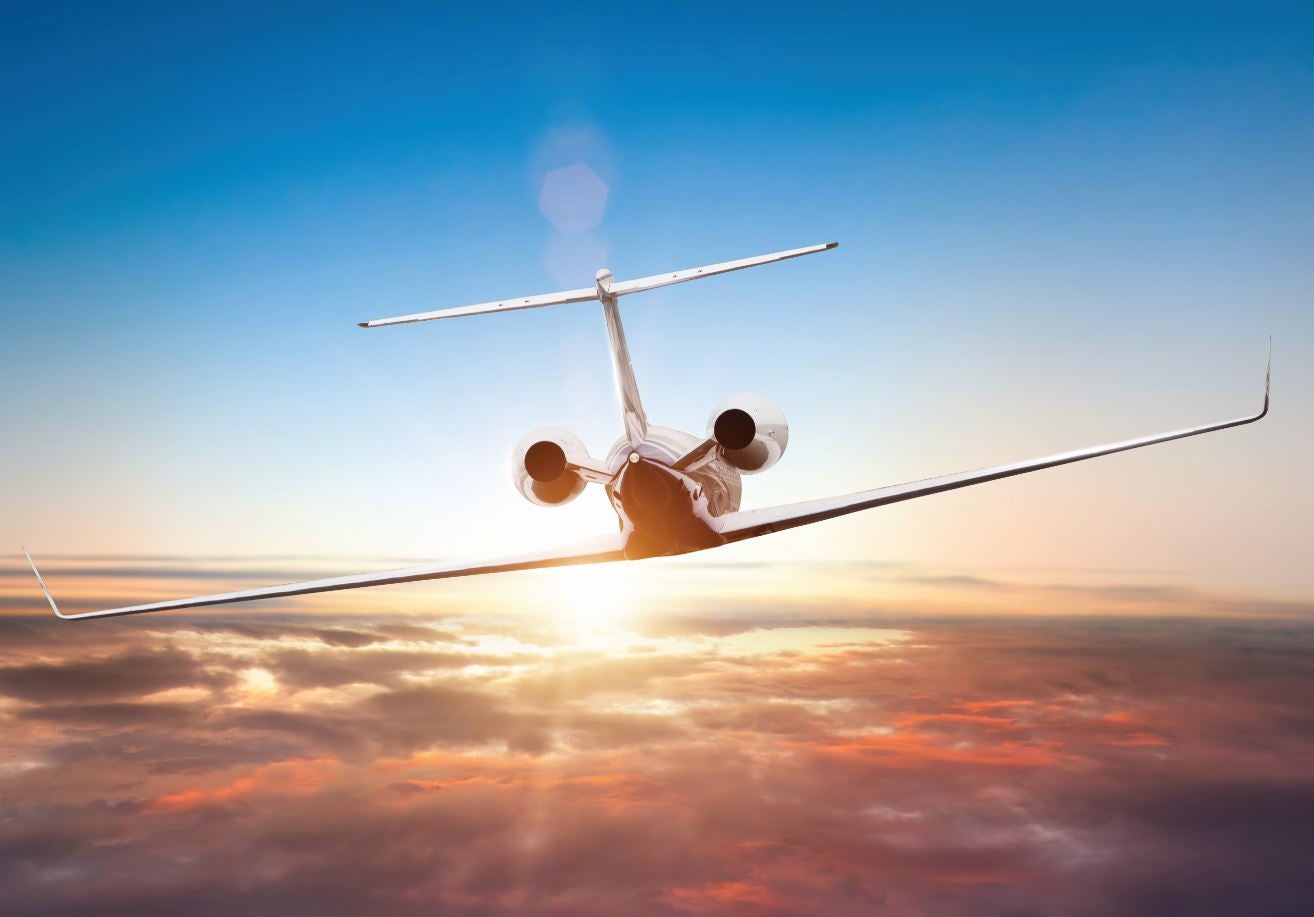 The Russian capital will serve as the most important city for the discerning soccer fan. It is where two of the main stadiums are located and where the opening match and final will be played.

The best choice for private jet travelers is Sheremetyevo, which has a dedicated terminal for private and business aviation.

The Saint Petersburg Stadium was constructed at an estimated cost of $1.5 billion and is estimated to be the most expensive soccer stadium in the world. It has an unmistakable outline, reminiscent of a flying saucer, and its position on the Baltic coastline provides spectacular views out towards Finland.

If you’re flying out there for the semi-final on July 10th then the closest private jet terminal is at Pulkovo, where there are six FBOs to choose from to look after your aircraft.

The Kazan Arena will host one of the quarter-finals as well as group games, including South Korea v Germany. Kazan international Airport has private jet facilities.

The southernmost stadium, Fischt Stadium, will play host to the exciting encounter between two of Europe’s top teams – Portugal and Spain – as well as another of the quarter-finals. Sochi International Airport is the closest to fly to. 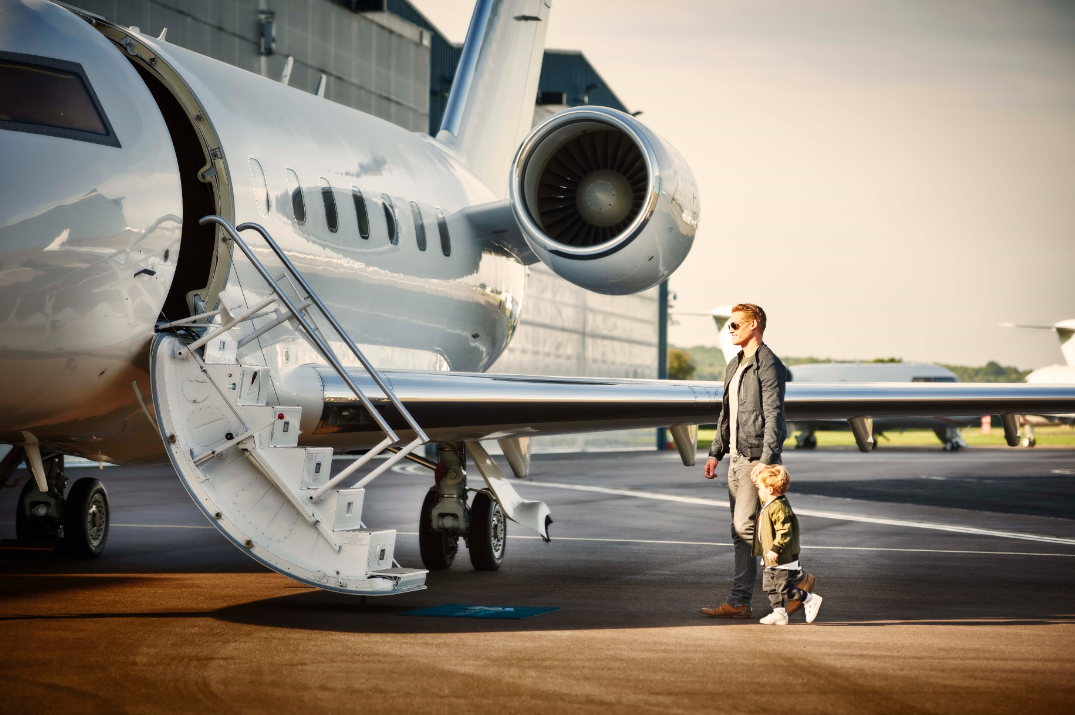 The Samara Stadium is one of the most architecturally impressive stadiums as it is covered by a 65m high glass dome. Russia v Uruguay and the July 7th Quarter final will be held there. The Kurumoch International Airport has private check-in desks and a lounge area for those flying in by jet.

The Novgorod Stadium looks over the Volga River and the historic Novgorod Kremlin. Amongst other matches it will host England v Panama and another of the quarterfinals. Strigino Airport is the best option for landing your private jet.

If you’re making the flight over to the Ekaterinburg Arena, the easternmost host city is served by Koltsovo Airport. The VIP terminal retains the Russian neoclassical façade of the original 1954 airport, giving the VIP experience a regal feel.

The Rostov arena is part of the redevelopment of the River Don’s south bank. It will host Brazil and Uruguayan group games with the nearest terminal being located at Rostov-on-Don Airport.

England will be playing one of their World Cup group games at the Volgograd arena. Volgograd Airport has upped its capacity and facilities in preparation for the World Cup and is the closest to the arena. 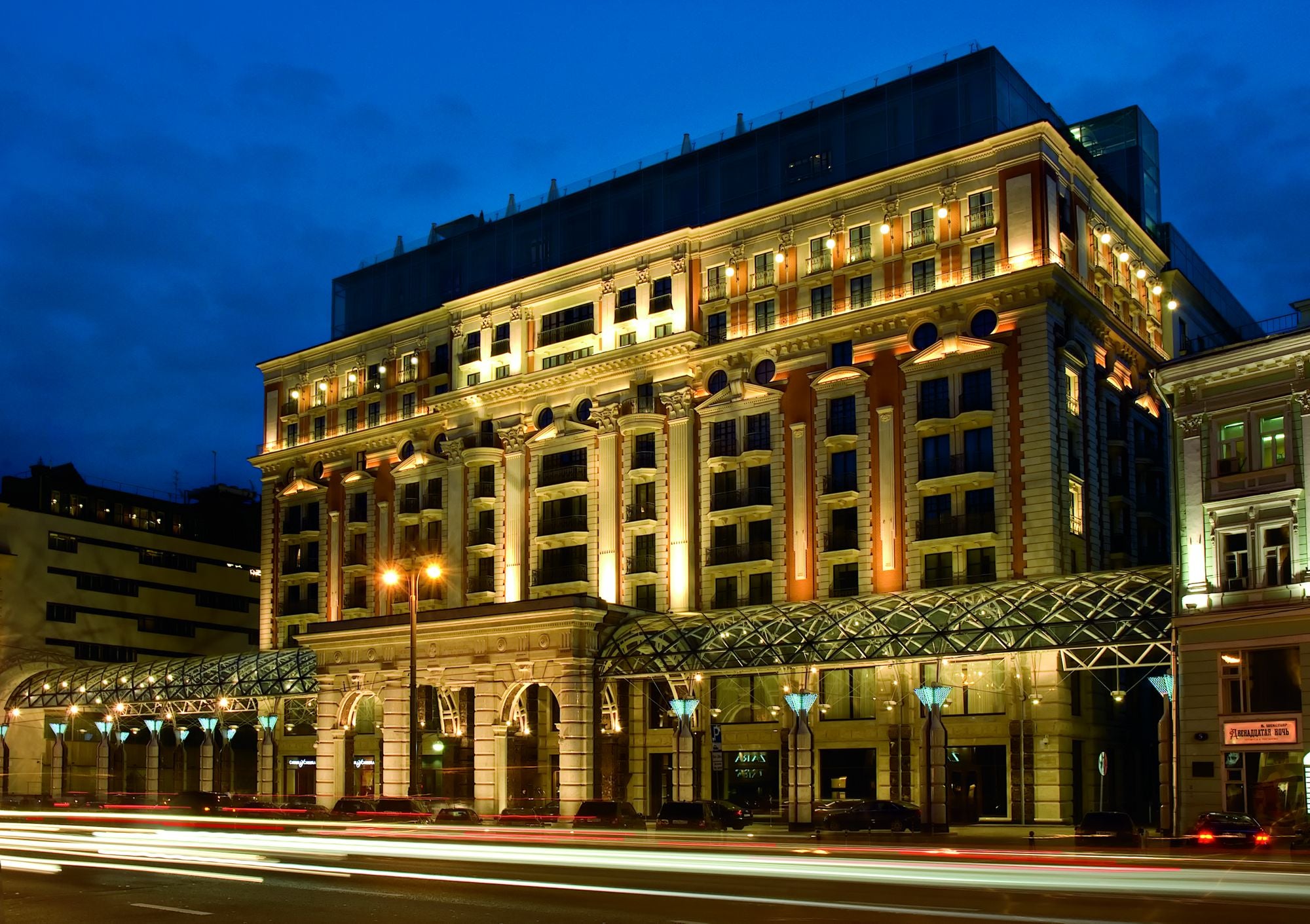 Being based in the capital city, this luxury hotel is ideally placed for the opening game and the finals. The hotel itself gives you the taste of life as a Tsar and has the same attention to detail as a Fabergé egg.

The grand exterior only gives a hint as to the luxuriousness that lies inside. The gilded interior is influenced by 19th century Russian classicism and is elaborately decorated throughout. The hotel is moments from the historically significant sites of Red Square and the Kremlin.

Their top suite is a spacious 2550 sq ft and offers panoramic views over the city. The opulent marble bathroom has heated floors, a Jacuzzi and a bath butler menu. It has a library, office and lounge, complete with a grand piano.

The rooftop lounge and bar is the perfect place to relax after a day of watching soccer at the Luhzniki stadium and the Novikov restaurant can provide you with delicious Pan Asian cuisine. 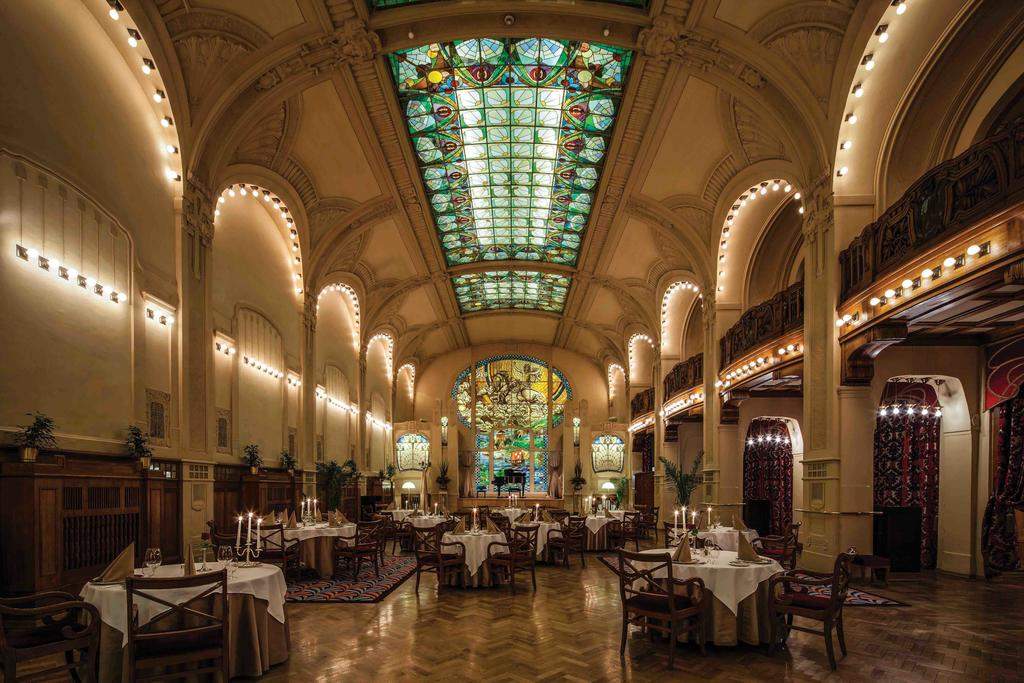 The hotel has a vintage take on the concept of luxury, having served Russia’s most esteemed guests for over a century. It’s located in the centre of St Petersburg and comes fully fitted with a  spa, fitness center, beauty salon, and can guarantee private box seating for the opera or ballets at the Mariinsky Theatre – for when you want an alternative to football.

Their range of suites has been inspired by Russian avant-garde artists and historical figures and each one comes with butler service. The Presidential suite occupies an entire corner of the hotel and comes with private amenities including a lounge bar, fitness centre, music room with grand piano and a combined library and study.

Not only does it have a reputation as St Petersburg’s finest hotel it also contains the city’s top restaurant. L’Europa offers contemporary haute cuisine inspired by traditional Russian recipes in the impeccable art-nouveau surroundings of the grand dining room. Their caviar bar offers the finest selection of beluga, oscietra and sevruga and can be enjoyed under the stunning stain glass roof. 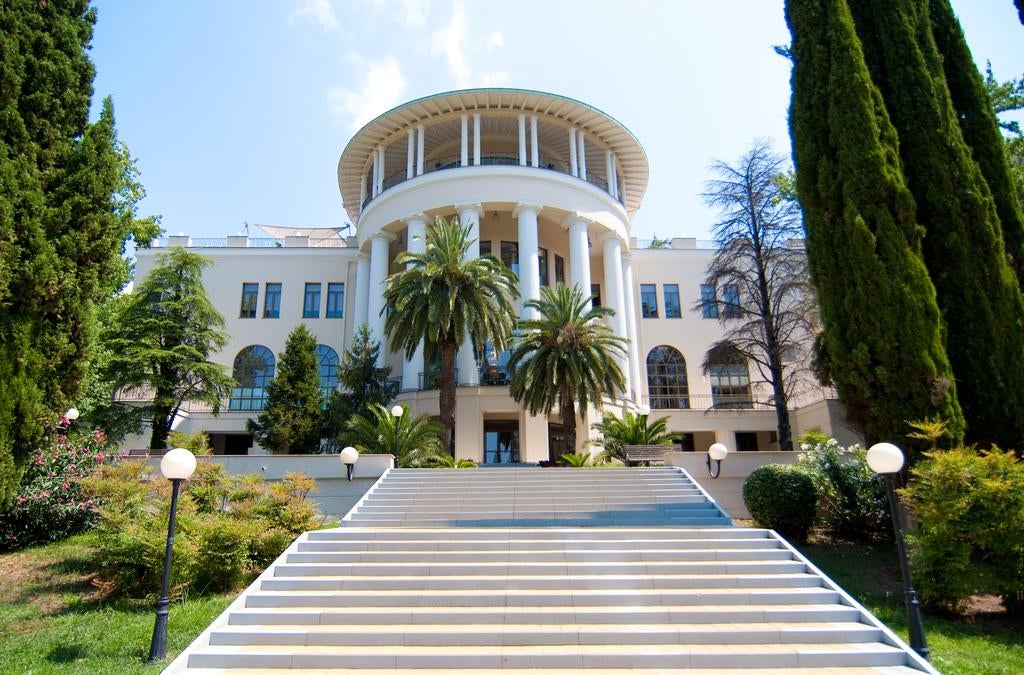 Located in the heart of the Russian Riviera this five star hotel and spa is in the best location for the Fischt Stadium and the other games taking place near the Black Sea border.

Surrounded by a 15 hectare subtropical park, staying at the Rodina is like stepping into paradise. Guests are treated to attentive service with the option of a chauffeur and personal concierge, for a stress-free and relaxing stay.

The Rodina has one of the largest spa and bath complexes in Europe, covering 4500m². A library, cinema, and sports facilities are also available. The rooms themselves have impressive views over the park and sea. For a more exclusive retreat the 19 room luxury Rodina villa has its own 24 hour bar, private beach, reception and restaurant, separate from the rest of the hotel.