The Cote d’Azur is loosely defined, as befits an area synonymous with relaxation. The French Mediterranean coastline stretching from the border with Italy across to Toulon is blessed with beautiful beaches, a fine climate and some spectacular views out over the water. It is also home to numerous high-end restaurants, many of them with glorious natural settings.

Just on the border with Italy is Menton and Mauro Colagreco’s Mirazur restaurant, elevated to three Michelin stars in the 2019 French Michelin guide. The restaurant has a superb view over the water and serves innovative modern food using local ingredients, some grown in their own orchard and garden.

As you head west you come to the city-state of Monaco, which hosts the three-star Michelin Louis XV. This looks out over the main square of Monaco and serves Mediterranean dishes including the local specialty of barbajuan, a tasty fritter stuffed with ricotta cheese and Swiss chard. 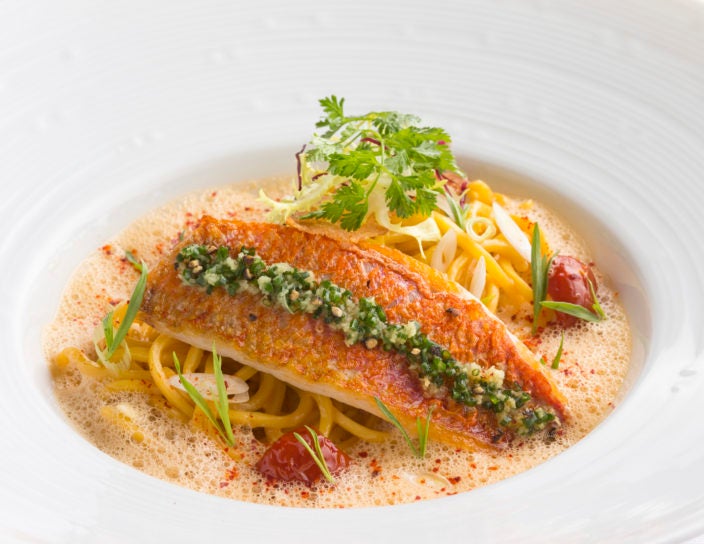 Monaco also has the excellent two-Michelin-star Joel Robuchon Monte Carlo, tucked away in the Hotel Metropole. Here you can try Robuchon’s signature dishes such as crab with citrus-flavored avocado and red pepper sauce, and indulge yourself with the fabulous old-fashioned dessert trolley.

Perched 1,400 feet up in the hills west of Monaco is the walled medieval town of Eze. Here is the lovely Chevre d’Or, set in a rebuilt castle and with a spectacular view down over the coast. The food matches the location, with two Michelin stars for its classical dishes such as red mullet with local vegetables, and fine desserts featuring lemons from nearby Menton.

Continuing west along the Riviera you come to Nice, which has the main airport of the region and also the two-Michelin-star Chantecler. Here you can enjoy classic dishes like steamed turbot with artichokes along with more modern ones like blue lobster with an Asian sauce. Incidentally, the former head chef of Chantelcerc, Dominique Le Stanc, now cooks entirely on his own at the excellent bistro Merenda near the Nice seaside.

Heading west of Nice you come to Cannes, famous for its film festival. Here is Palme d’Or, the best restaurant in town, situated directly on the Croisette. Chef Christian Sinicropi makes the most of the fine local vegetables and seafood in dishes like spider crab mousse with morel jus.

Continuing west along the Cote d’Azur you come to Saint-Tropez, and in the seaside Residence de la Pinede hotel is Vague d’Or. Chef Arnaud Donckele has been awarded three stars for his dishes such as zitone pasta with foie gras and artichokes.

Just a touch west of Toulon, the western end of the Cote d’Azur, is Marseilles, also with an international airport and a three Michelin star restaurant called Le Petit Nice.

This has a spectacular setting atop cliffs overlooking the Mediterranean and specializes in the fine seafood offered in the local markets. As can be seen, the Cote d’Azur coastline offers not only sun-drenched beaches and sea views but also a rich selection of fine dining restaurants.

The Best Restaurants in the World with Andy Hayler