Hot on the tail of the fifth release from Cask 88’s award-winning Scottish Folklore Series, the Edinburgh-based independent whisky bottler has announced the upcoming arrival of a brand new collection: the Cask 88 Unfiltered Series.

Launching on 21 July, the Unfiltered Series will see the staged release of four never-to-be-repeated single cask, unblended expressions. Each will be bottled straight from the cask and will remain pure with no coloring, filtering or dilution, presenting each cask as its own entity.

However, unlike many limited edition whisky releases, the Unfiltered Series is not geared at collectors. Instead, Cask 88 wants whisky enthusiasts to enjoy the series exactly how it was intended: in a glass. Discussing the thinking behind the new releases, Sam Laing, Cask 88’s Head of Content said: “The Unfiltered series of bottles is about celebrating the casks as they come, because no two are alike. We choose the contents of each bottle because we like the contents of the cask — and this could be whisky that’s younger or older and from any distillery in Scotland.”

[See also: The Macallan Reveals Concept No 3 With David Carson]

There are two things about the new series that might surprise Scotch whisky connoisseurs. First is its rarity; there are less than 300 bottles of each release set to hit the market. Second of all — especially considering the limited quantities of each release —  is the price. With the first release of the series starting at just £70 ($100), Laing said: “We believe in setting the price according to this value, and not adding the markup for secondary concerns such as elaborate packaging.”

So rarity and value for money aside, what can we expect from the four releases within Cask 88’s Unfiltered Series? Elite Traveler was invited to a special tasting by the rare cask specialists to find out. 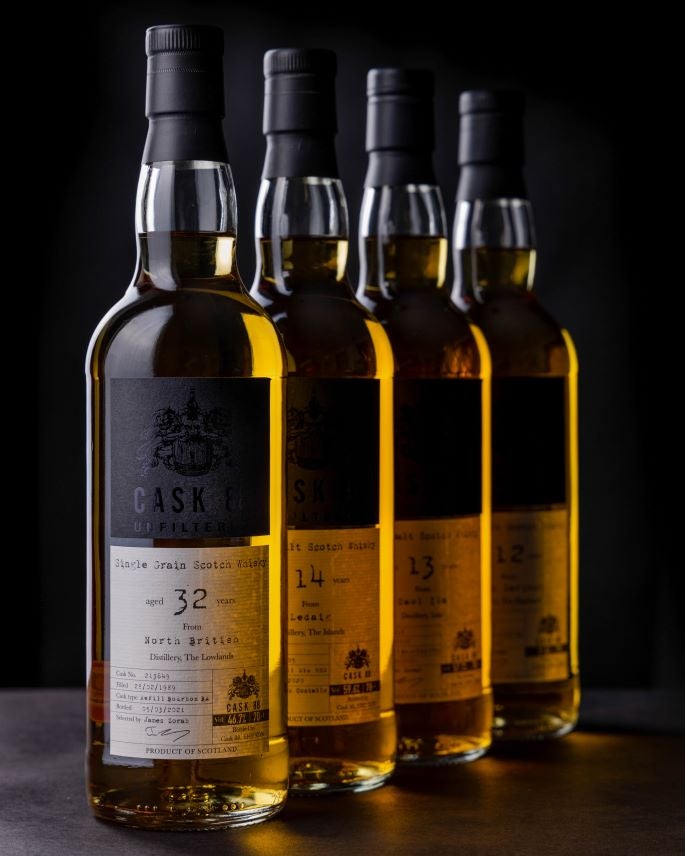 The Glen Garioch 12 Year Old is a honeyed and heather-rich single malt from one of the oldest distilleries in the Scottish highlands. It is the youngest release of the series and spent its time aging in a refill bourbon barrel, resulting in a floral nose and somewhat sweet palate with hints of orchard fruits, vanilla, spice and coffee.

Islay’s Caol Ila distillery is known for its smoldering tastes and Cask 88’s Caol Ila 13 Year Old is no different. A truly rocky and rugged Islay malt, hints of the dying embers of a Heberdian beach fire meet the subtle sweetness of blackcurrants, while the palate is sweet with a smoky nutmeg finish.

The North British 32 Year Old is the oldest in the Cask 88 Unfiltered Series. There are just 215 bottles of this bright and citrusy grain whisky set to be released, which also makes it the rarest of the lot.  Originally distilled in 1989 at the Edinburgh-based North British distillery, the nose is aromatic and fruity while the palate brings lemon and grapefruit as well as a pastry with a warm and woody finish.

Hailing from the island of Mull on Scotland’s West coast, the Ledaig 14 Year Old is an indulgent dessert-style single malt distilled from a first-fill oloroso sherry hogshead. Aromas of parma violets, strawberries and condensed milk are balanced with oak while the palate offers flavors of walnut crumble, mint and maple syrup.

Those wishing to gain priority access to purchase the first release of the Unfiltered Series can register via Cask 88’s website. Prices range from $100 for the Glen Garioch 12 Year old to $195 for the Ledaig 14 Year Old.