Any storied brand can trace back to a seminal moment that put it on the road to success. For both Bowmore Whisky and Aston Martin, it arrived in 1964. For Bowmore, the year marked the arrival of a steam boiler that brought an end to coal-fired production. It was the first distillation from this boiler that produced a spirit that became one of the most sought-after whiskies in the world, the Black Bowmore. For Aston Martin, 1964 was the year the DB5 car captivated audiences in the iconic James Bond film Goldfinger. To this day, the DB5 is one of the most desirable and admired sports cars ever made.

Neither company would be where it is now without the events of 1964, so it’s fitting they’ve joined forces to produce something that captures their significance.

The Black Bowmore DB5 1964 is a striking concept that marries icons of whisky and motoring. The bottle contains the 31 Year Old Black Bowmore, which was produced on that fabled first distillation; it’s presented in a genuine piston taken from under the hood of an Aston Martin DB5. Like the automobile is for motorheads, the Black Bowmore is as elusive as it is exquisite.

Just 6,000 bottles of the single malt whisky have been made available since 1993, and this latest release is limited to just 25 decanters. It has become hugely collectible not just for its rarity but for its sublimely rich and decadent flavor, which is reflected in its deep, dark complexion. Even with a $65,000 price tag, demand is expected to outstrip supply. 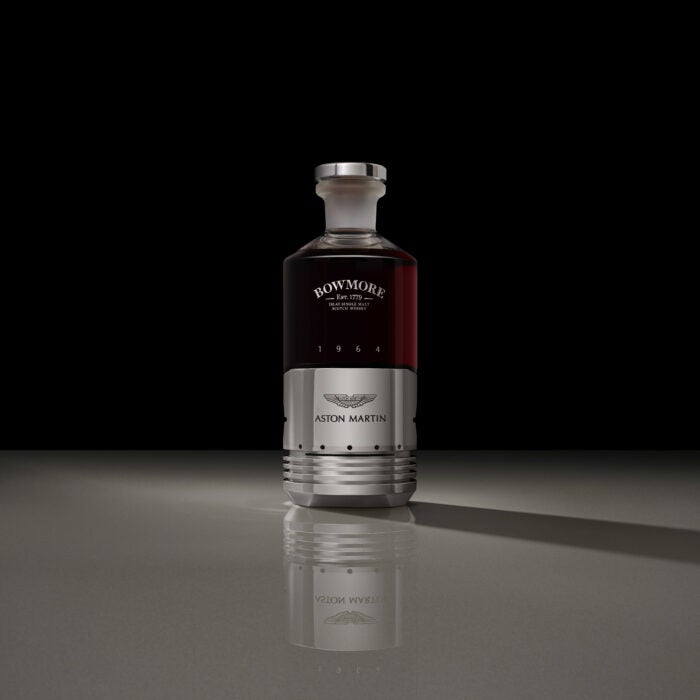 The bottle is presented in a genuine DB5 piston

“Arguably, Black Bowmore already has iconic status, particularly amongst whisky collectors around the world,” says distillery manager David Turner. “This incredible collaborative product further supports this position and shows the power of partnership in a new and innovative way. We hope that this release goes on to take its rightful place in the legacy we are building for Bowmore and defines the future of our partnership with Aston Martin.”

The bottle itself is a fitting home for such an extraordinary liquid. Each one is handcrafted by experienced artisans at Glasstorm and takes up to a week to make. The presentation box is also a work of art. It has been created from the finest calfskin and features custom nickel-plated brass hinges that reflect the unique styling of the DB5.

Both brands have agreed to follow strict Drink Smart guidelines to ensure all promotional material avoids any link to drinking and driving.

The Macallan 72 in Lalique 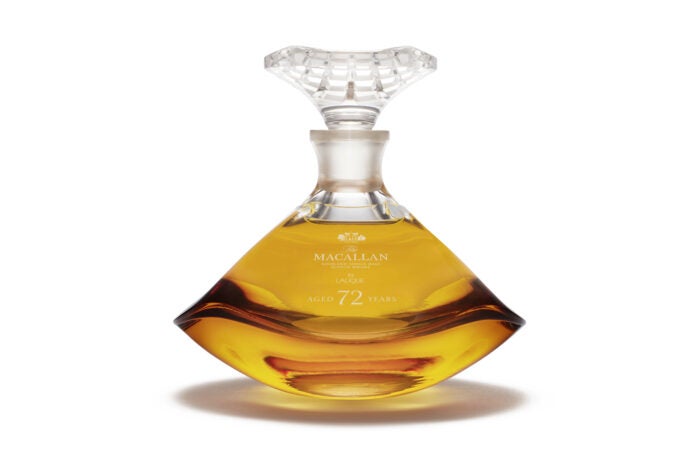 The Macallan 72 Year Old was the oldest whisky ever released by the legendary distillery at the time (later trumped by the 74 and 78 Year Old in The Red Collection). Marking a huge moment in its illustrious history, The Macallan partnered with Lalique to create a bespoke decanter as special as the liquid it would hold. Its unique design was inspired by the distinctive architecture of The Macallan’s distillery, with the decanter rising and falling in reflection of its roof line. 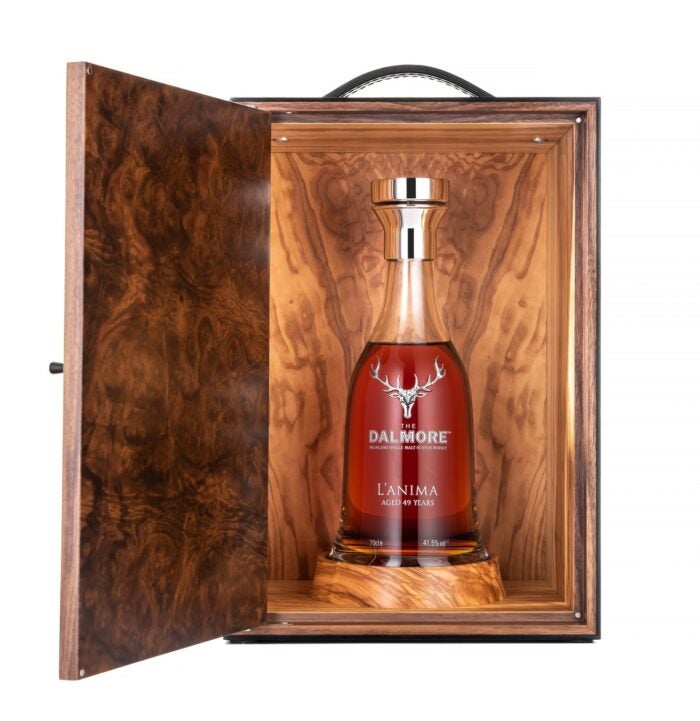 Master distiller Richard Paterson partnered with one of the world’s best chefs, Massimo Bottura, to create this one-of-a-kind whisky. The pair, both masters of their respective arts, combined expertise to create a spirit that celebrates flavors from Bottura’s three-Michelin-starred Osteria Francescana. The liquid is a marriage of extremely rare expressions taken from some of The Dalmore’s most prized casks. The only bottle in existence was sold at auction and raised $141,000 for charity.

[See also: The Most Exclusive Whisky in the World]