A wonderfully aged liquid presented in a stunning Lalique decanter sells for over $40,000 at auction. You would be forgiven for assuming we were talking about a collectible Scotch whisky. In actual fact, the bottle in question was filled with the most expensive rum ever to grace Sotheby’s auction house, Dictador Generations En Lalique.

The auction appears to be a seminal moment for the rum industry, which has been inching its way into the luxury market for years. With whisky performing so well as a commodity over the last 20 years, true spirit enthusiasts have been opening their eyes to opportunities in neglected industries. Rum has been ripe for premiumization and this release is nothing if not ultra-premium.

Although the hammer price was record breaking for Sotheby’s, it was no surprise to see Dictador Generations En Lalique go for $41,600. It went for the same price as a rare whisky because it matches up to one in many different ways. It is incredibly rare (one of just 300 bottles), it is Bottle No.0 (the “proof bottle”) and, most importantly, it is an exceptional liquid. The all-inclusive trip for two to the distillery in Cartagena, Colombia, would have sweetened the deal for the lucky buyer.

The rum is an extra-special blend of vintages produced in 1976 and aged in American oak and port casks. While whisky collectors may become blasé to 40+ year liquids, making a rum that old comes with significant challenges. While the angel’s share in the Scottish Highlands sits at around 2% a year on average, in the tropical heat of Colombia (where Dictador makes its rum), it can be up to 6%. Nursing rum to this age requires true dedication and patience. Luckily, that is what Dictador’s master blender Hernan Parra and his father Dario have in spades. 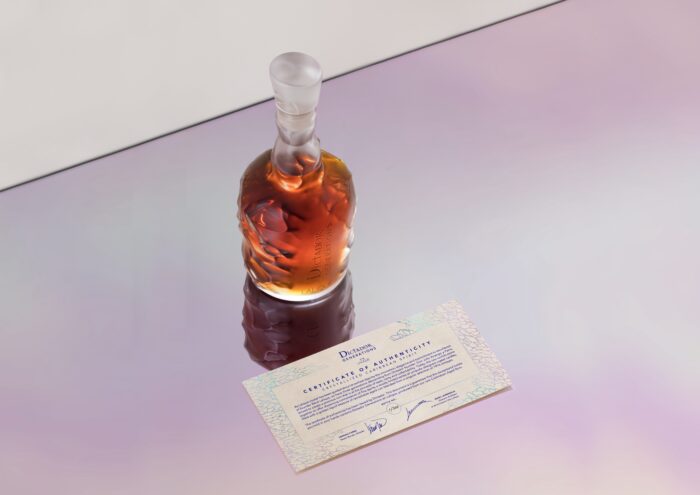 Years of hard work have paid off in the form of a liquid that goes beyond anything the rum industry has produced before. Bottled at 43% ABV, the Dictador Generations En Lalique offers a level of depth on par with a fine and rare whisky. The American oak influences offer notes of dark chocolate and rich leather before its natural sweetness takes over with layers of black cherry. An exceptional and complex tasting experience is rounded off with a strong toasted cigar tobacco finish.

But the liquid is only part of the story. Ken Grier, Dictador’s creative director, did not shy away from the fact that the Generations En Lalique is as much an investment opportunity as something to open. He described it as “the ground-floor of rum investment”, suggesting Dictador is heading in the same direction as Grier’s previous employers, The Macallan (by far the most collectible Scotch whisky).

Grier’s involvement goes a long way to explaining Lalique’s involvement in the project as well. He was the mastermind behind many Macallan x Lalique bottlings, which today sell for many times more than their original asking price. Having witnessed the incredible work Lalique does firsthand, the French glassmaker was an obvious choice for a liquid as special as this. The decanter was designed by its creative director Mark Larminaux. He used the calm movements of the Caribbean Sea to design a beautiful decanter that reflects the liquid’s enticing color.

Dictador has always been dedicated to the ultra-premium market, but it has only achieved what it has to date through its dedication and commitment to local resources. The family-owned house, based in Cartagena, runs a separate non-profit called Art Masters. The project is turning an abandoned rum distillery in the jungle of north Colombia into the world’s greatest graffiti museum. All of the profits from the Sotheby’s sale were given to the project, which will help to promote local art through non-traditional means.