A flying car has been issued a certificate of airworthiness by the Slovak Transport Authority and could become a feature of our skies as early as next year.  Produced by innovative Slovak engineering firm Klein Vision, the AirCar underwent 70 hours of rigorous flight testing compatible with European Aviation Safety Agency standards ahead of achieving the significant milestone.

Capable of transforming from a road vehicle into an aircraft, the certification means that flying cars may no longer be confined to the pages of sci-fi novels or Hanna-Barbera cartoons. In fact, Klein Vision is scheduled to start taking its first orders for the AirCar as soon as March 2022, with the delivery of its first models predicted at the end of next year.

To achieve the certification, it took a skilled team of eight specialists over 100,000 man-hours to translate AirCar’s design plans into mathematical models and create five different prototypes. The final model is a two-seat dual-mode vehicle powered by a 140hp 1.6L BMW engine.

[See also: Jetcraft’s President on The Rise of Pre-Owned Aircraft]

Klein certainly has faith in his vehicle. Doubling as its test pilot, the professor has led AirCar through a host of performance maneuvers including take-offs and landings without even the slightest touch of the flight controls.

Capable of reaching in-air speeds of nearly 125mph with a range of 310 miles,  project co-founder Anton Zajac believes the vehicle’s certification marks the beginning of an exciting new chapter in travel.  “Fifty years ago, the car was the epitome of freedom. AirCar expands those frontiers, by taking us into the next dimension; where road meets sky.” 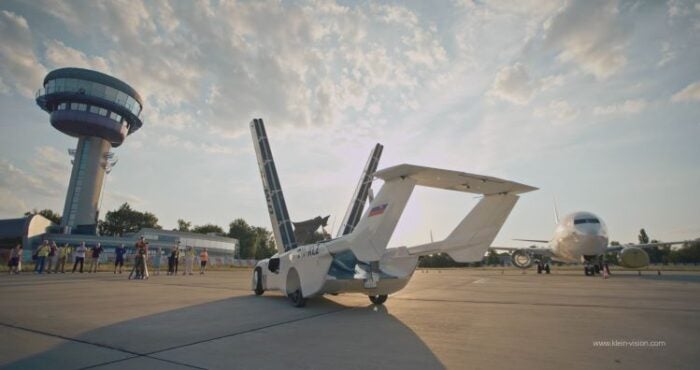 Having achieved certification for its first flying car, Klein Vision isn’t showing any signs of slowing. Testing is already underway on a new powerful and efficient ADEPT Airmotive aviation engine, alongside finalized drawings for an upcoming monocoque model.

The new pitch propeller model will offer lower fuel consumption making it kinder to the planet with the added bonus of reaching predicted speeds in excess of 186mph. It is also expected to boast double the range of the existing model at an impressive 620 miles. The ambitious firm hopes to have the new flying car model certified in around 12 months’ time.

“We are also considering a fully electric version once the energy density per kilogram allows sufficient endurance (up to 620 miles),” Zajac tells Elite Traveler.

[See also: Onboard the Sustainable Airship Bound for the North Pole]