“Is that a Monet?” people ask in disbelief when they visit Paul Lindahl’s home for the first time. Hanging above the fireplace in his hallway is one of the French impressionist’s masterpieces. The oil painting glints in the light; you can see every brushstroke, every dab of paint.

But Lindahl hasn’t raided a gallery. The ‘painting’ is in fact a high-end 3D replication that was printed using his company’s ultra-precise scanning system. Using this technology, Arius has scanned some of the planet’s most famous paintings to measure the exact height of the brushstrokes on the surface of the canvas, right down to one-tenth the thickness of a human hair.

“Once you’ve scanned a painting, you have tens of millions of data points,” Lindahl tells me over Zoom, from his office in Vancouver. “It’s like a digital fingerprint.”

The technology was developed by a team at the National Research Council of Canada to undertake a scientific examination of the Mona Lisa at the Musée de Louvre back in 2004. Over two consecutive nights, the team used a portable scanning system to digitize Da Vinci’s painting and create a 3D virtual model composed of over 333 million polygons.

From this virtual model, the researchers were able to gain a fascinating insight into the iconic masterpiece, examining everything from the warping of the poplar wooden panel that supports the canvas to the patterns of cracked paint on the surface. 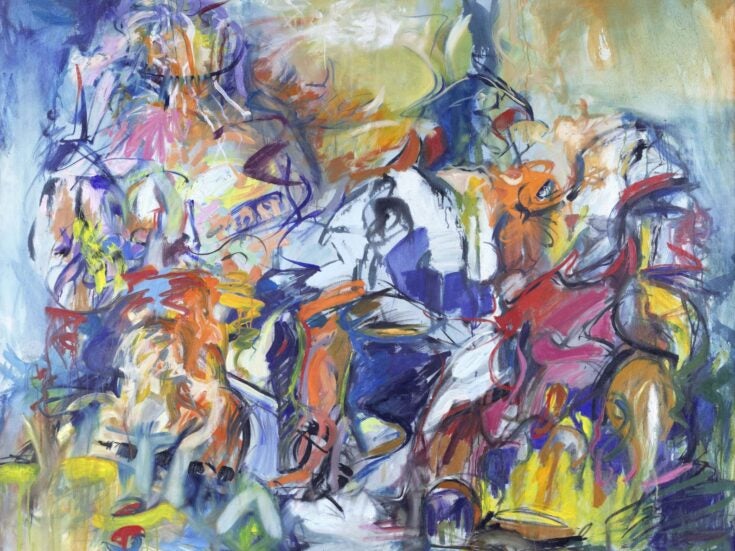 The Must-Visit Exhibition Openings of 2023

Lindahl had been working in the 3D industry at the time. When he heard about the technology, he was intrigued. The CEO set up Arius to acquire it and joined forces with Canon to take the scanning system one step further, going beyond conservation analysis to produce printed replications.

Their first collaboration was with the National Gallery of Canada. In 2016, after several years spent perfecting the technology, Arius chose to replicate Van Gogh’s Iris.

“I remember looking closely at the print and I saw what looked like some sort of damage; someone had touched the ink while it was still wet,” recalls Lindahl. “So I phoned the conservator in Ottawa and I told him ‘I’m going to send you the print, but just be aware it’s been damaged so I think we need to rescan it. He said ‘Oh no – that’s in the original. That was Van Gogh; it’s probably the handle of his brush.’”

The conservators were stunned by the results. But they were keen to push the technology even further. For their next project, they chose to scan Monet’s Jean-Pierre Hoschedé and Michel Monet on the Banks of the Epte (the print which now hangs in Lindahl’s hallway).

“We were looking at the painting on the monitor and saw all of these spots over the data, so I called the director of conservation and I said, ‘I think we’re going to have to rescan the Monet,” remembers Lindahl with a wry smile.

“He told me that the spots we detected in the scan were on the painting; most people wouldn’t know it but there had been a degradation of the pigments in the paint. I said we could fix the data points by taking the color from the surrounding patches and replacing it. So that’s what we did; we fixed the degradations and then reprinted it.”

By creating this digitally restored replica the conservators were able to see what Monet’s painting might have looked like before the colors had deteriorated.

Not everyone was impressed by the technology, though. After printing Iris, Lindahl took the replica to a collection of galleries and museums to show the art world what his scanner could do. “I walked into one place and they looked at me like I had put a bomb in the middle of the table,” he tells me. “One of the early objections I got was people saying it’s a fake or a forgery.”

But the CEO is keen to stress that from an ethical perspective, “it truly is a replication – there’s no intent to fool”. In fact, he continues, as soon as you take the print out of the frame it’s clear to see it’s not the original; Arius prints on aluminum, not canvas.

Despite this somewhat nervy reception from parts of the art world, Lindahl is brimming with ideas for how the replications can be put to good use. For a start, he says, museums can display the 3D prints when precious works are undergoing restoration. “There are some paintings that are so fragile that they can’t travel to exhibitions,” he explains. “Can you imagine having a Vermeer exhibit and not having Girl with a Pearl Earring on display?”

In 2018, Arius’s partner Canon worked with the Mauritshuis to scan Vermeer’s masterpiece and create a textured replication which was displayed as part of the Girl in the Spotlight exhibition, during which visitors could watch forensic analysis taking place on the original painting.

Beyond conservation efforts, the entrepreneur believes the technology could be used by private art collectors who want to display replicas of their multi-million-dollar paintings at home or onboard their superyacht while the original is kept safely in high-security storage.

And it’s not just historic paintings that Arius has turned its hand to. The technology company also works with living artists to modify and create replications of their works. Last year, for example, the team joined forces with contemporary artist Stale Amsterdam to create limited-edition replications of his layered portraits.

But perhaps most exciting of all for Lindahl is the possibilities that artificial intelligence brings. “Photographs don’t have enough data for AI to really sink its teeth into but if you present it with millions of data points it can be really interesting,” he says.

“Let’s say we started scanning verified authentic Picassos and the AI gets to a point where it really understands all of the subtleties of the painter’s style. At some point, instead of telling the AI ‘This is a Picasso, This is a Picasso’, we could turn it around, presenting the scan with data and asking it ‘Is this a Picasso?’” Within seconds, he says, the AI would be able to give an answer with 99% accuracy.

For now, this is just an idea, but if there is interest in this application from the art world, Lindahl hopes to use the scanning technology for artist attribution and to spot forgeries. Of course, he adds with a glint in his eye, “I could imagine some of the industry might not want to know.”

[See also: Fascinating Art Hotels From Around the World]