There is an arms race going on within Scotch, one that values age above all else. Like any good arms race, the provocateurs flatly deny its existence. The Scotch decides when it’s ready, not the marketing team, or so they say. It is, however, timely for Gordon & MacPhail to release the world’s oldest Scotch whisky less than a year after losing the title to The Macallan.

To be fair to the family-owned independent, they had already bottled the extraordinary Glenlivet 80 Year Old when The Macallan revealed a 78 Year Old in 2020. The 80 Year Old was first extracted from Cask 340 in February 2020 and held back due to the pandemic, but what is another 18 months when you have already waited 80 years? That wait is now over. Having first announced the new addition to its Generations series in June, the oldest whisky ever – and its stunning decanter – was revealed to the world at Sotheby’s London on September 2. Elite Traveler was there to try it.

Waiting is certainly a theme that runs through Gordon & MacPhail. Leaving each cask to reach its full potential has been at the heart of the company for 125 years. It is only with unwavering patience and skill that the owning family were able to nurse this whisky to such an age. Cask 340 had unusually thick staves, meaning the angel’s share (liquid within the cask lost to evaporation) was less than 1% per year. Still, that adds up over the course of eight decades. By the time the liquid was ready, there was just enough for 250 decanters to be filled… and a few 30ml tasters. 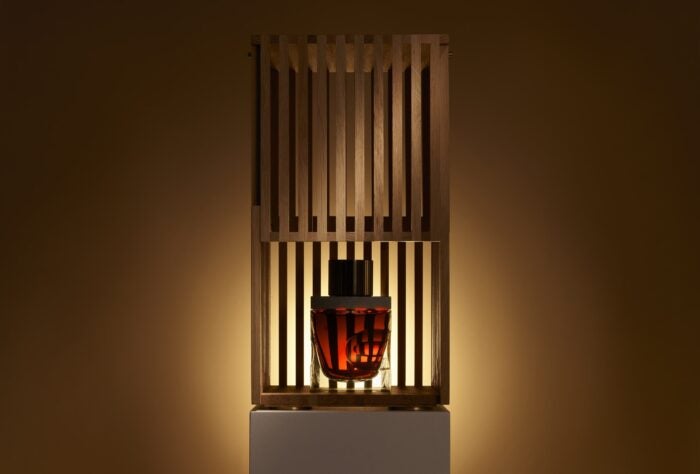 So what does a 44.9% ABV 80 Year Old taste like? The nose offers a deep sweetness accompanied by sandalwood and just a hint of smoke. Still, after eight decades, that lingering floral freshness of a typical Glenlivet remains. On the palate, the whisky is surprisingly vibrant and fruity. There is a strong woody spice, as you would expect, but time in the glass allows notes of orange oil, aniseed and figs to shine through. Aptly, the whisky offers an exceptionally long finish that continues to evolve over several minutes, eventually transforming into hints of spearmint.

Naturally, Gordon and MacPhail wanted to make sure such a special liquid had a fitting home, so they reached out to a kindred spirit in Sir David Adjaye. The world-renowned architect and secret whisky enthusiast has designed buildings on five continents, so a decanter might seem like child’s play. But speaking at unveiling, Adjaye admitted he had taken just as long to design it as he would a multi-story building.

Adjaye based his design around whisky’s inextricable link with oak. Not only is whisky aged in oak casks, but it is also the symbol for an 80th anniversary. “Oak is a primary material, produced from the planet,” said Adjaye. “I appreciate its preciousness as an integral part of the whisky-making process. I wanted to create a design that pays tribute to the role oak plays in transforming liquid into an elixir with almost magical properties.”

The jewel-like decanter contains lenses that focus on the deep amber liquid and is topped with a piece of darkened oak. Its cube shape and a generous amount of crystal make it difficult to carry. The indentations will aid the lucky few who will be pouring the liquid into a glass. Its curved core had to be individually hand-blown by master craftsmen at Glencairn Crystal Studio. The decanter sits in a bespoke “pavilion” inspired by an oak tree forest. Each one was handcrafted from sustainably sourced oak grown less than five miles from makers Wardour Workshops. 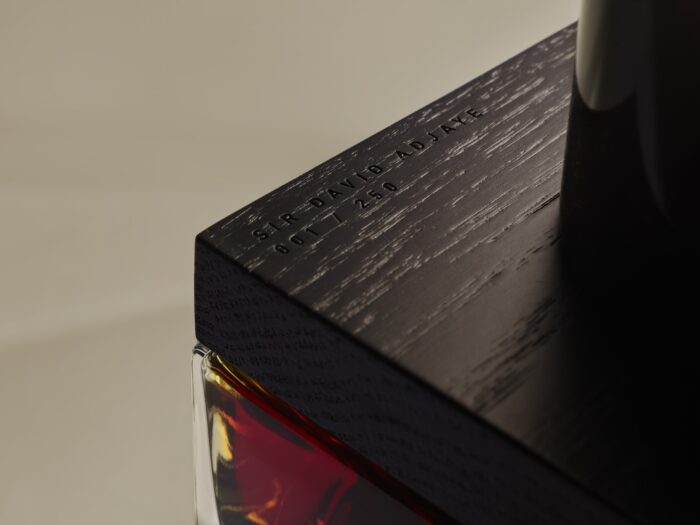 Each decanter is numbered on a darkened oak tablet / ©Gordon & MacPhail

“The ambition was to create a vessel in which Gordon & MacPhail’s unique experience and tradition is transmitted and incorporated,” said Adjaye. “The vertical struts of the outer pavilion are reflective of trees in an oak forest from which the staves of the original cask were hewn. A pivotal moment in the design narrative is the relationship between the light and shadow as the casing is opened and closed. The light refracted through the opened casing recreates the sunlight as it shines through oak trees within a natural forest setting. The act of opening the pavilion becomes a ceremonial and sensorial process.”

Executives at Gordon & MacPhail understand they are benefitting from the work of past generations, so are keen to ensure this liquid helps to secure a future for not only their successors but for the world at large. Decanter No 1 of 250 will be auctioned with all proceeds (minus costs) donated to Scottish charity Trees for Life. Funds will drive forward its mission to rewild the Caledonian Forest and regenerate lost habitats.

The auction will be held at Sotheby’s Hong Kong on October 7 with a high estimate of $200,000. The winning bidder will also receive the cask head of Cask 340, original sketches from Adjaye’s workshop and a bespoke tasting with Stephen Rankin, a fourth-generation member of the owning family.

Until then, Decanter No 1 will be displayed at Sotheby’s London before a stint in New York and then Hong Kong. The price of the other 249 decanters will be revealed after the auction.