St. Patrick’s day has spread out from the emerald isles and is now established as a worldwide celebration of Irish heritage. Although the day is often associated with consuming copious amounts of Guinness there are more distinguished ways to spend it. Elite Traveler gets the craic on the best Irish retreats for St. Paddy’s day. 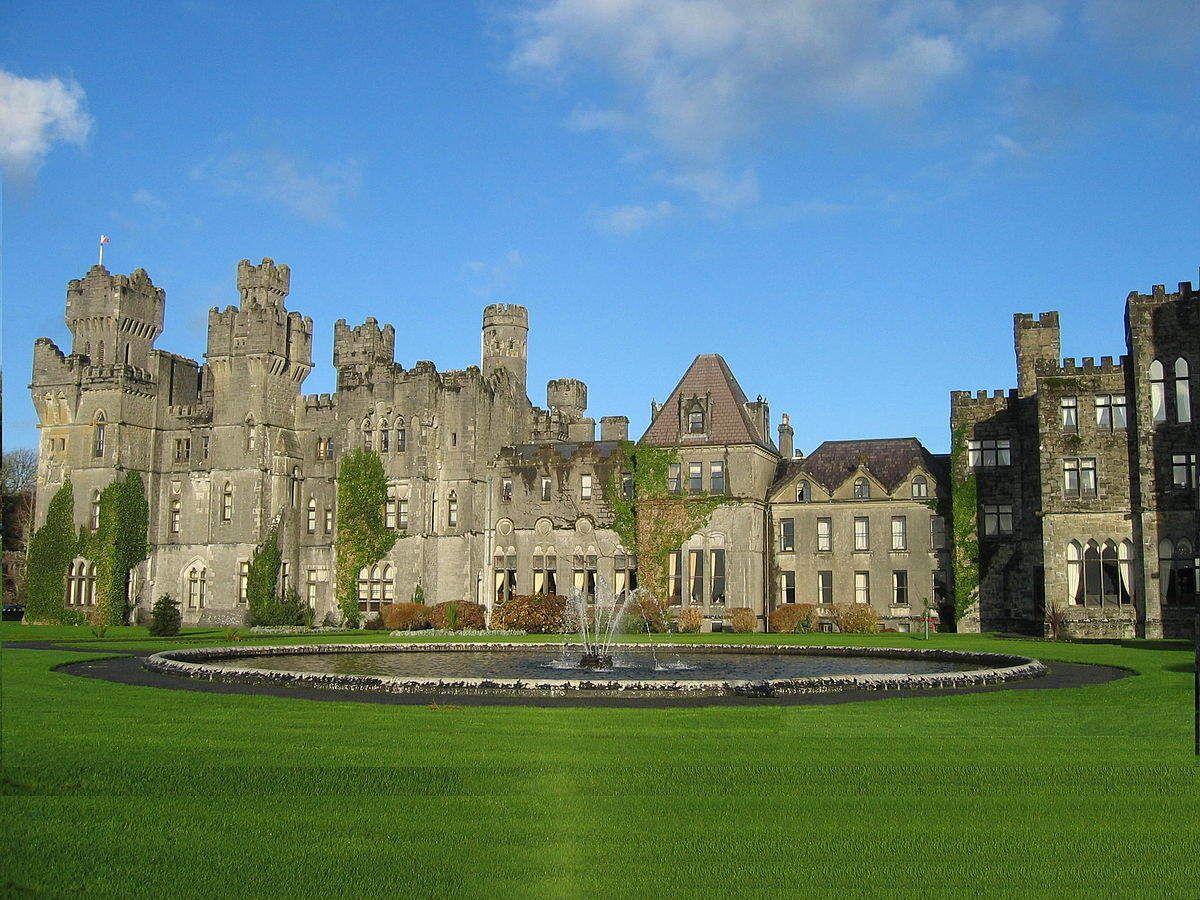 When looking for the ultimate in luxury hotels the medieval setting of Ashford Castle is a hard one to compete with. As a member of the leading Hotels of the World organization and winner of several hotel of the year awards this Irish retreat has the credentials to match its lavish setting overlooking Lough Corrib.

The Castle was originally the stronghold for the House of Burke and passed through many families, including the Guinness family before being transformed into a first class hotel. The county Mayo hotel has hosted royalty, dignitaries and celebrities including King George V, Ronald Reagan, Oscar Wilde John Lennon and Brad Pitt. It boasts 83 luxurious rooms and suites and a romantic lakeside cottage, which was converted from the castles old boatshed.

With 350 acres of surrounding garden and woodland the hotel is dedicated to the country pursuits Falconry, Horse Riding, Archery, Shooting, Salmon Fishing, Tennis or Golfing – there really is an endless list of things to do. On the other hand if relaxation is your priority then the spa, which was voted the best in Ireland at the 2017 world spa awards, provides the perfect curative for weary travellers. 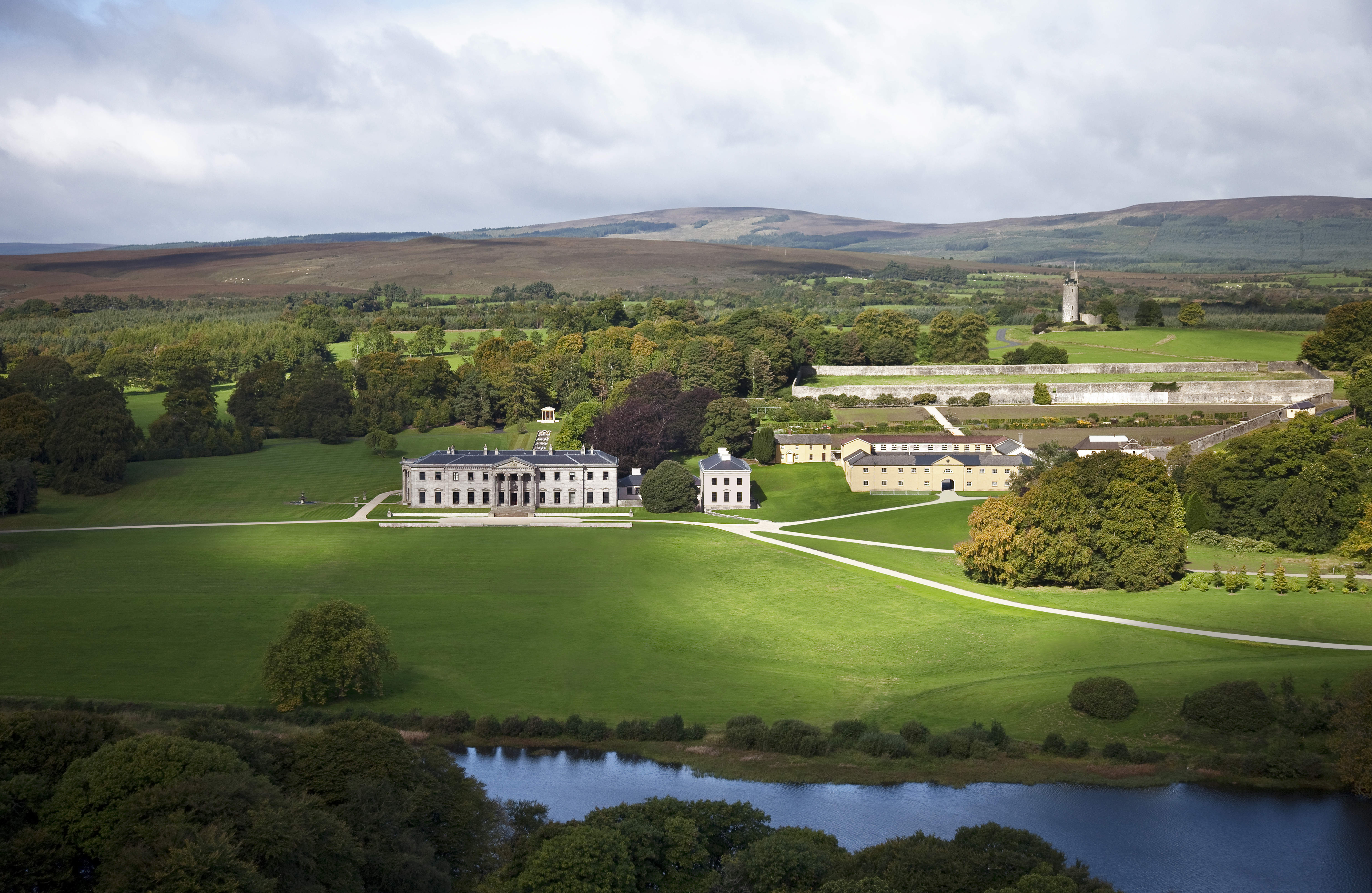 This five star hotel, located at the foot of the Slieve Bloom mountains in central Ireland, was converted from a Regency mansion. The renovation project was completed in 2011 and returned the country house to its former grandeur. Neither the size of the rooms nor the architectural splendour of the building was sacrificed in the restoration process. With only 20 rooms available this truly feels like a home away from home.

The redevelopment retained many of the quirky original features whilst adapting it to meet the standards a modern guest demands. The entrance to the conservatory lies hidden behind a false bookcase and the pictures in the reception rooms celebrates the history of Irish art.

Ballyfin is also celebrated for its excellent standard of service combined with the traditional Irish charm. The concierge will seek to make your stay as stress free as possible. A picnic can be delivered to you whilst you’re on a stroll in the hotel’s 600 acre grounds or chauffeurs can give you a guided tour of the surrounding countryside – no request is too much. 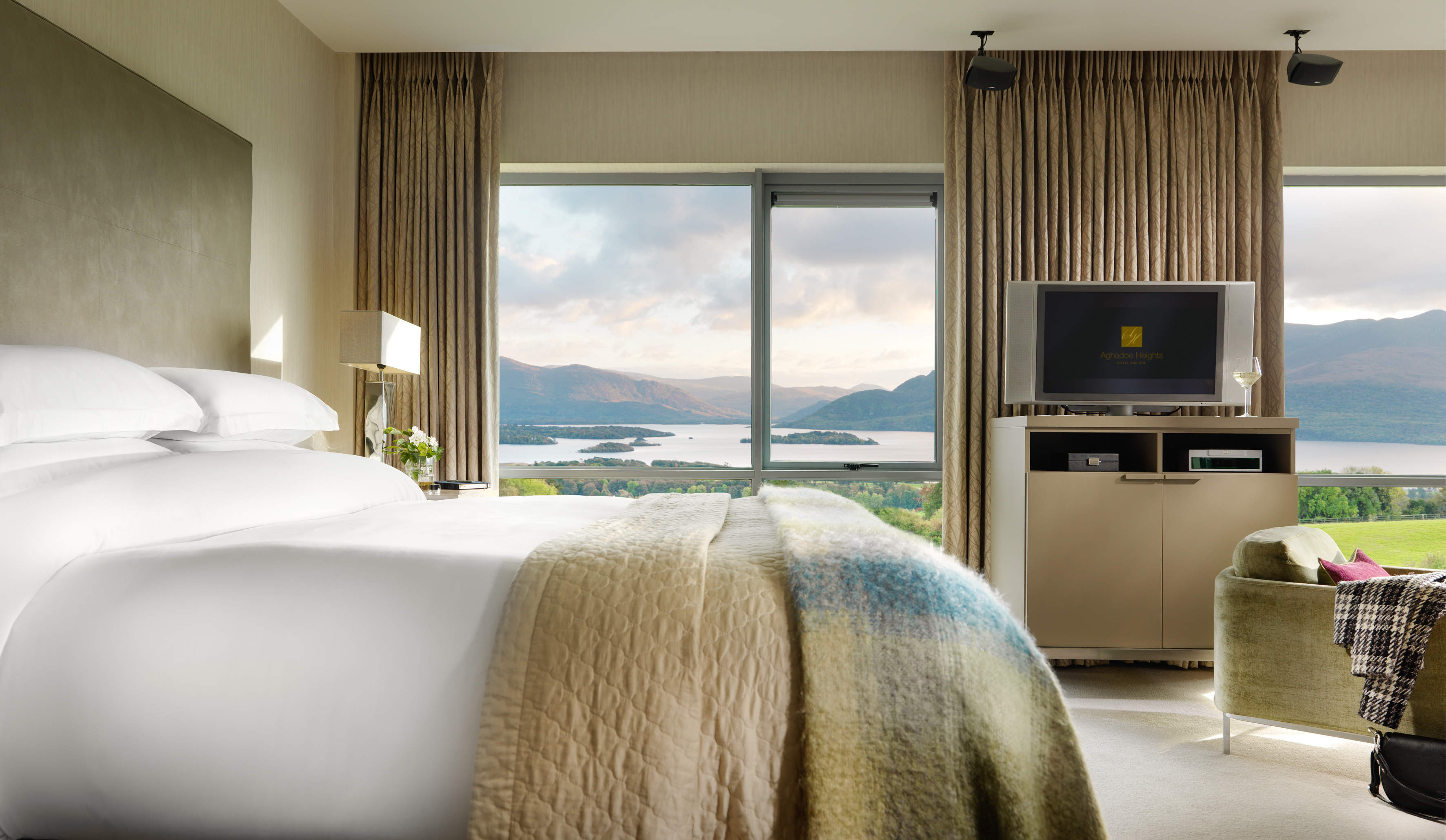 The premier hotel in Killarney offers breath-taking views across the Kerry Mountains and the Loughs of Killarney. It should be the first choice for those wishing to experience the rugged Irish landscape. Experience the green rolling hills, craggy cliffs and the wild Atlantic sea, which is only a short drive away.

The two AA Rosette Lake Room Restaurant uses the finest in Irish ingredients and has a lengthy wine list to match. The spa offers a refuge from the temperamental Irish weather. Taking inspiration from the natural environment it’s surrounded by, treatments use seaweed and saltwater from the County Kerry coastline and the pool even features a waterfall. 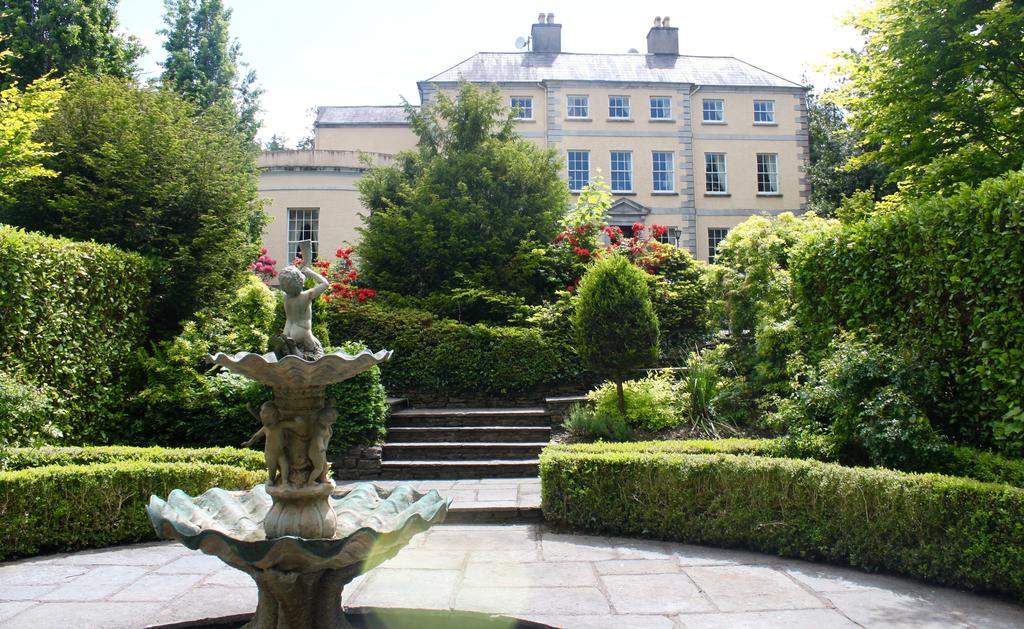 Located 5km south of Ireland’s second city, the Maryborourgh Hotel and spa is in a prime location for St. Patrick’s day celebrations. The city of Cork goes all out for the patron saint day complete with a parade and traditional Irish music that will bring the party spirit to the cosmopolitan city.

The hotel itself has plenty to keep you occupied during your stay. Their concierge recommends teeing off at one of the county’s top golf courses – the nation’s favourite pastime. With Douglas Golf Club, Cork Golfclub and The Old Head all on your doorstep there is no excuse not to enjoy a round. Alternatively Gluckman and Crawford art galleries offer a more cultured way to spend an afternoon.

The five star hotel features two master suites and a unique spa suite, with its own Jacuzzi and treatment options. The 18th century building retains the original Georgian features whilst the décor is modern and elegant. The Maryborough offers cosmopolitan comfort for those that want the convenience of a city location whilst also being close to the Irish countryside and coast. 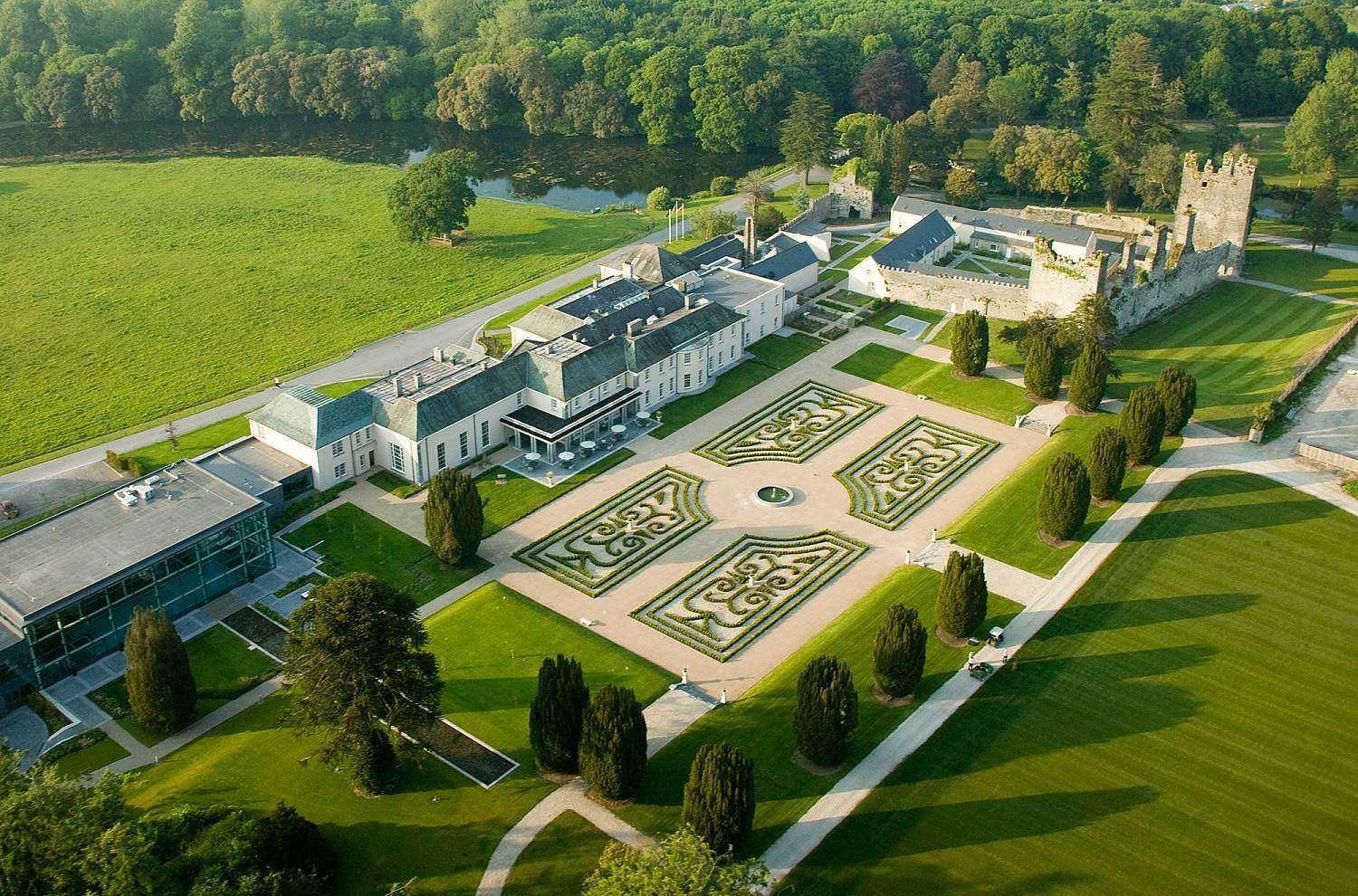 The 800 year old manor house was chosen by Kim Kardashian and Kanye West for their honeymoon and has earned a name for itself as one of Ireland’s most exclusive retreats. The presidential suite was voted Ireland’s leading hotel suite at the 2017 World Travel Awards and features a reception room, dining room and personal elevator to bring dishes straight from the hotel kitchens.

The pool and spa feature floor to ceiling windows that look out over the ornate gardens and Castlemartyr’s 220 acres of grounds. The hotel staff pay exquisite attention to your every need and ensure you are constantly looked after. Dine in elegance in Francini’s or have a sophisticated afternoon tea in the bell Tower.

Castlemartyr has its own unique place in Irish history too, having been constructed by the Knights Templar in 1210. The Christian military force were led by Richard de Clare who was more commonly known by  the nickname Strongbow.