All eyes will be on world-renowned chef Mauro Colagreco as he unveils his latest restaurant, Ceto, this Saturday at the Maybourne Riviera hotel. Promising to be a celebration of the sea, the new eatery’s location is certainly fitting.

Perched atop a rocky outcrop above Roquebrune-Cap-Martin in France, the striking modernist hotel boasts impressive views of Italy to the east, Monte Carlo to the west, and, stretching as far as the eye can see, the azure waters of the Mediterranean.

With this stunning backdrop for inspiration, it will come as little surprise that seafood is at the heart of Ceto’s menu. But Colagreco’s latest venture is more than just a restaurant. The talented chef is also opening a ‘marine culinary workshop’ to increase knowledge about the region’s aquatic species while exploring more sustainable fishing solutions. 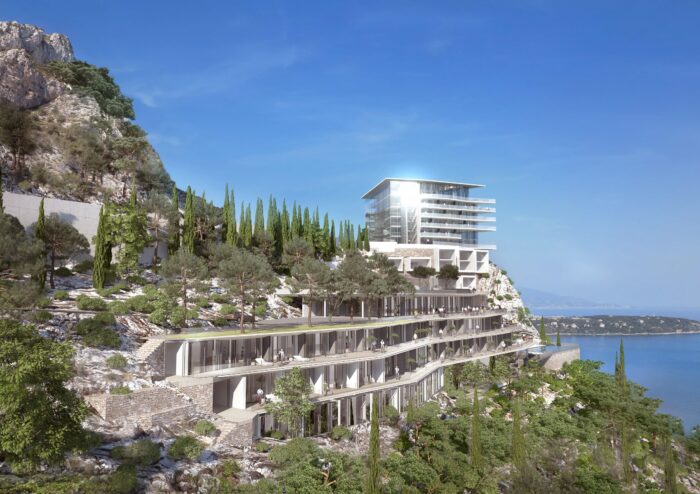 Argentinian-born Colagreco began his culinary journey at the Gato Dumas hotel in Buenos Aires, where he honed his skills at some of the city’s finest restaurants including Catalinas and Rey Castro.

The ambitious young chef arrived in France in the early 2000s and worked under the guidance of Bernard Loiseau at his legendary three Michelin star restaurant, La Côte d’Or, in Saulieu. Following his mentor’s tragic death, Colagreco moved to Paris, gracing the prestigious kitchens of Alain Passard at L’Arpège and Alain Ducasse at the Hôtel Plaza Athénée.

Settling in Menton on the Italian-French border, he opened his first restaurant, Mirazur, in 2006 using produce grown in the gardens to create modern, elegantly flavored dishes. Within a year the eatery earned its first Michelin star, followed by a second six years later.

By 2019, Mirazur had received its coveted third star and scooped the top spot of the World’s Best 50 Restaurants list, garnering widespread international acclaim. That same year, Colagreco became the first ever non-French chef to receive the ‘Chef of the Year’ award from Gault & Millau.

Today, his burgeoning culinary empire continues to expand with eateries in Paris (Grandcoeur), Courchevel and Cannes (BFire), Asia (AZUR at the Shangri-La Hotel Beijing and Grill 58 in Macau), the US (Florie’s at the Four Seasons Resort Palm Beach) and Argentina (Carne).

If Colagreco’s first restaurant in the Cote D’Azur is anything to go by, diners will be in for a treat at Ceto. True to form, his dishes play with textures, flavors and cooking processes with extraordinary results.

The vibrant seasonal menu at Ceto pays homage to the Mediterranean making full use of the plentiful supply of quality fish, and a broad range of delicious sea vegetables including seaweed, samphire, sea fennel and sea cucumber.

Stand-out sample dishes include Red Tuna with Kombu seaweed and XO sauce, Monkfish with kale and a bread crust sauce and Red Scorpionfish with grilled cèpes and a roasted Cèvennes onion sauce. The menu also features a selection of vegetarian options and pasture-fed meat dishes, such as tiger veal reared by the sea in Corsica.

[See also: The Best Restaurants in the Cote d’Azur]

Showcasing Colagreco’s dedication to sustainability, Ceto will also house a maturation chamber where the team will research new methods of preserving fish and prolonging maturation, to allow new flavors and textures to develop. The goal is to reduce waste and use the entire fish wherever possible.

Colagreco will continue to oversee The Riviera Restaurant, which opened last month on the ground floor of the hotel, offering an array of culinary delights that draw on the region’s rich gastronomic history and local produce. Highlights from the colorful, simple menu include sun-soaked vegetables in olive oil, Spaghetti alla Genovese and the not-to-be-missed Tarte tropézienne (a fluffy brioche cake filled with whipped cream and sprinkled with sugar).

Reflecting on his new venture, Colagreco said: “I am extremely proud to be a player in this unique project in the Maybourne Riviera, with a hotel group recognized around the world for its quality and excellence. It is a wonderful setting for guests to enjoy all that is so exceptional about this area of the Mediterranean.”