In 2019, over 150 brand-new superyachts were delivered; one of the standout designs of the year was the 209-ft yacht Scout, built for owner James Berwind and his partner, Kevin Clark. Named for one of her owners’ beloved dogs, she is set to be a semi-permanent base from which they can explore the world — canine companions and all.

The story of Scout begins with a simple napkin. “We started with a sketch on a napkin before interviewing any designers,” say Berwind and Clark. “Our wish list was to have a capable, comfortable explorer to travel the world, and we got a long-range ice-classed yacht with ample crew and guest areas, advanced systems for fuel efficiency, telecommunications and responsible waste management.” From the moment of that very first sketch, the couple was extremely hands on throughout every stage of the build, resulting in an incredibly personal yacht. “During the build we were involved 110%, in every aspect of the project,” they say.

Once they’d developed an initial concept for the yacht, a range of designers were approached, with UK-based H2 Yacht Design eventually being commissioned for both the exterior and interior design. “Jonny Horsfield was a fantastic collaborator; he and his team executed our vision impeccably,” say Berwind and Clark. The decision was made to build at Hakvoort Shipyard in the Netherlands; Scout is now the biggest yacht that the 100-year-old yard has built to date.

Scout’s fun detailing and a quirky design approach, paired with a contemporary and practical layout, make the yacht eminently usable while still bursting with personality. “Scout’s design was influenced by Fritz Lang’s Metropolis, the interiors of Jules Verne’s Nautilus submarine, every James Bond villain’s lair, with a touch of Looney Tunes,” say Berwind and Clark. “Everything about the interior focuses on the outside views with abundant windows and sliding glass walls.” 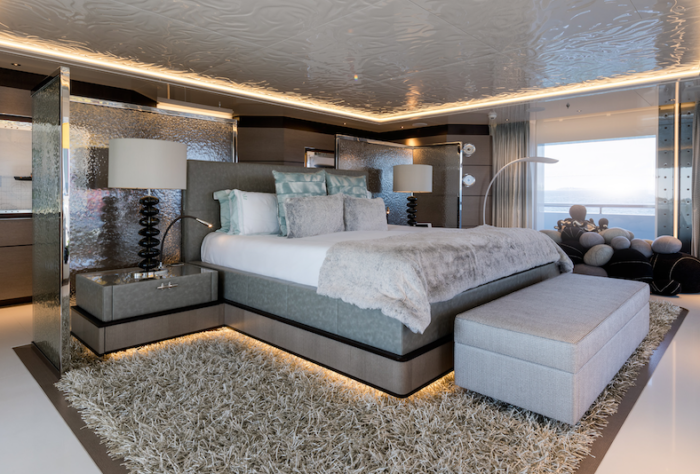 The sumptuous master bedroom about the superyacht Scout Her distinct exterior design pairs hardy explorer capabilities, striking lines and a hint of trawler influence. While this sounds slightly odd on paper, in real life it works in a stunning way. This is a yacht with her own style — inside and out — that turns heads wherever she goes. Distinctive design elements include a high freeboard, exposed tenders in the bow with cut-down bulwarks and integrated forward-sloping windows.

Her gray hull and white superstructure are complemented by playful pops of yellow. “She is a very unique vessel that really captures the owners’ passion for being on the water and their fun outlook on yachting,” says Captain Kynan McDonald. “It’s been an exciting project to be a part of.”

On board the yacht, in addition to her owners, Scout is able to welcome up to eight guests in four cabins, each with its own nautical-inspired theme. The main deck is a focal guest space, with a beautiful main saloon that includes an LCD ceiling that mirrors the outside scenes. Complementing the main saloon is a large winter garden — a social hub that is perfect for year-round use, thanks to frameless glass panels that provide shelter when needed and retract when not in use, plus full air conditioning.

The winter garden space features a cocktail bar for sharing fresh beverages and a dining table for 14; it’s no surprise that this is a favorite spot for hosting. Aft of the winter garden is an intimate C-shaped fire pit that’s ideal for gathering around as the sun sets, with atmospheric flames flickering in front of the horizon.

A beautiful private owner’s apartment is accessed via a library studded with nautical-themed artifacts. The apartment is a stylish retreat with multiple spaces including an observation lounge forward — this characterful space includes a hidden bar area within a globe structure, seating around stone-topped tables inset with constellations and a carbon fiber squid sculpture by British artist Alistair Gibson hanging from the ceiling. The owners’ full-beam bedroom suite has two large bathrooms, walk-in closets and frosted full-length windows to port and starboard. 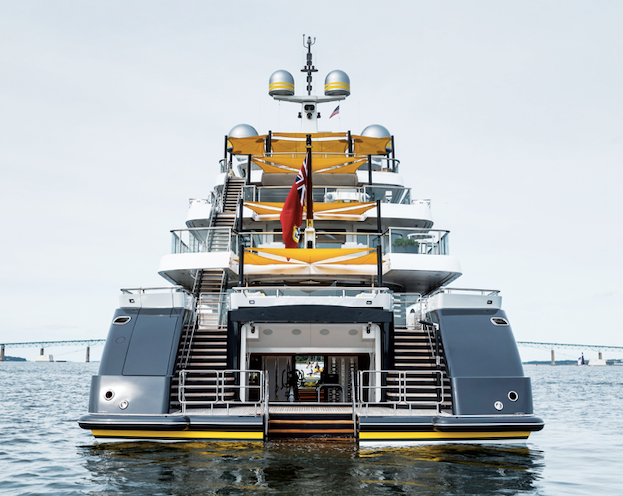 A rear view of the superyacht Scout

The master suite leads out to what the owners affectionately call “Puppy Park,” a custom-designed garden area for their two dogs, Scout and Brio, to enjoy. With their pets set to be on board for long stretches of time, it was very important to design the boat with this specialist usage in mind. “The dogs have their own ‘yard,’ all materials on board are pet-friendly, and all access points, such as the gates, scuppers and door sensors, are ‘puppy proofed,’” say Berwind and Clark. This passion for animals also extended to the construction of the yacht itself. “As animal rights activists, we used no animal-based materials — no fur, no hide, no bone, etc. — on board.”

Above the main deck, the bridge deck is home to the modern bridge, which has sophisticated operating systems and comfortable seating for those wanting to watch the captain at work. This deck also features another very personal space — dubbed the ‘greenhouse’ — which has been designed around the owners’ passion for gardening, and includes its own potting shed, sink and gardening equipment.

Outdoors, a favorite spot has proved to be the vast, multipurpose sundeck. “We live up there with our guests and dogs, and we also love the open fore to aft space,” say Berwind and Clark. The sundeck is an impressive open space, even by superyacht standards, with features including an inviting Jacuzzi and sweeping views across the ocean.

[See also: How Much Does a Yacht Cost to Build?]

A helipad on the foredeck allows guests to arrive and depart in style by chopper, while an impressive crane ensures easy deployment of the vessel’s two 26-ft tenders. A packed lineup of toys and water equipment ensures that Scout’s guests can enjoy their ocean playground no matter where they cruise. The yacht’s custom limousine tender, built by Cockwells, has been finished in the same color scheme as Scout and can carry up to 10 guests while reaching a thrilling top speed of 37 knots.

While the average superyacht is used for just six weeks a year, Scout will buck the trend, with her owners hoping to spend up to seven months of the year on board: It will be a true home away from home. “We plan to use Scout as our primary home for the next several years and hope to travel extensively wherever, whenever, with safety as a primary concern,” say Berwind and Clark.

“Bucket list locations include the British Isles, the Far East and Hawaii.” With her ice-classed hull, very little of the world will be off limits, and there is no doubt that her owners are set to enjoy cruising on board just as much as they enjoyed the build process. Scout truly embodies the endless possibilities of custom yacht building where, if you can dream it, it can be made a reality. 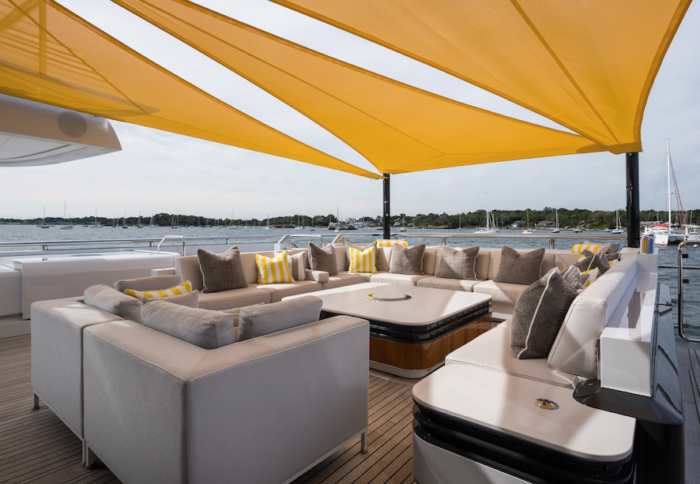 A lounge on one of the many decks aboard superyacht Scout