There is no mistaking the iconic Maltese Falcon yacht. Like a fantastical modern day pirate ship, this 288-ft motor sailing yacht commands attention wherever she goes and has been described as the world’s most photographed yacht. Launched in 2006 by the Perini Navi shipyard, she perfectly blends the high performance of a sailing yacht and the luxurious comfort of a motor yacht.

When the Maltese Falcon – the brainchild of her first owner, the late Tom Perkins –launched in 1990, it had been six years in the making. A staggering amount of research and development, design work and innovation went into bringing her to reality and she did not disappoint.

It was immediately clear that this was one of the most significant yacht launches of the past century, one that pushed all the capabilities of superyacht design. The Maltese Falcon transformed the world of superyachts forever.

Construction work was undertaken at Perini Navi’s Turkish facility in Tuzla, with the core project team made up of Perkins, naval architect Gerard Dijkstra of Dykstra Naval Architects (DNA) and Ken Freivokh of Ken Freivokh Design, who designed the interior and exterior. The yacht began life as the steel hull of an abandoned yacht project before being identified as a suitable platform for Maltese Falcon. This was the third time that Perkins had built a yacht with Perini Navi, but it would be his biggest and boldest build by far.

One of the Maltese Falcon’s most distinctive traits is her masts and sails, and the design for the entire yacht was centered around them. Powered by square-sailed “Dynarig” technology, which was suggested and developed for the yacht by Dijkstra, she features three carbon fiber masts with a computer-run sail and mast control system that allows push button sailing.

In a nutshell, her huge 25,791-sq-ft sail area is spread out over 15 sails – five for each mast – that are fixed to the mast’s curved yards and set and furled using an electrical control system. The freestanding masts are then rotated as desired to adjust the sails. 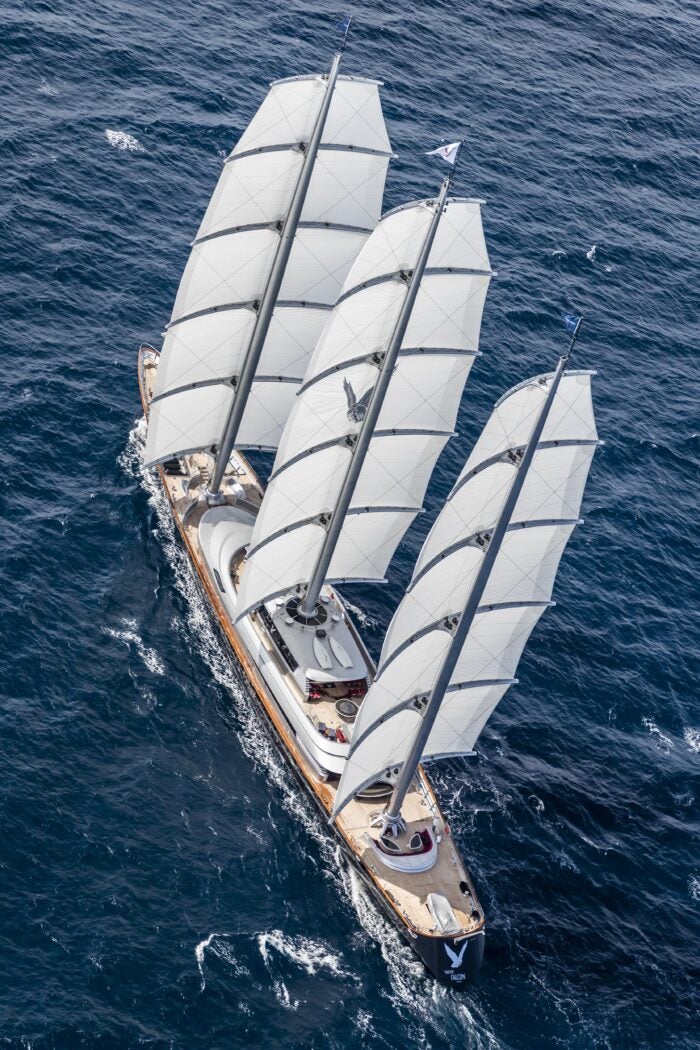 The Maltese Falcon’s huge 25,791-sq-ft sail area is spread out over 15 sails – five for each mast / ©SuperYachtsMonaco

This complex, yet extremely simple, system makes sailing the Maltese Falcon almost effortless for sailors of all skillsets – it takes just six minutes to set the sails and only 90 seconds to tack the yacht. The entire system can be run by just one person.

In addition to its reliability and ease of use, the Dynarig system allows the yacht to sail fast and efficiently, delivering significant economic and environmental savings.

Her ease of use means she regularly travels under sail, vastly reducing her reliance on and consumption of fuel. She doesn’t shirk on performance either. Able to reach top speeds of 18 knots, the Maltese Falcon has more than proved herself out on the water, having won many sailing regattas including The Superyacht Cup 2010 and the Perini Cup several times.

Freivokh describes the design of the yacht as being “form follows function,” while still upholding essential design principles, balanced proportions, and uncluttered and purposeful shapes. For the interior, Freivokh created an elegant aesthetic with an industrial edge. This effect was achieved using a combination of materials including walnut, Macassar ebony, glass, leather, carbon fiber and aluminum, complemented by beautiful artworks and sculptures.

The Maltese Falcon accommodates 12 guests in six cabins – the full beam master is positioned on the lower deck, with highlights including a full width dressing room and a private gym. The equally impressive VIP suite is located on the upper deck with direct access to the bridge and its own deck space. Four large doubles, all with ensuites, complete the picture.

The Maltese Falcon is a very social yacht that is well suited to entertaining. Her spacious layout allows for six different dining and entertainment spaces. The main deck is the focal point for guests to gather and enjoy. The large main saloon leads directly out to a circular bar that includes a full formal dining table – picture world-class dining under the stars. 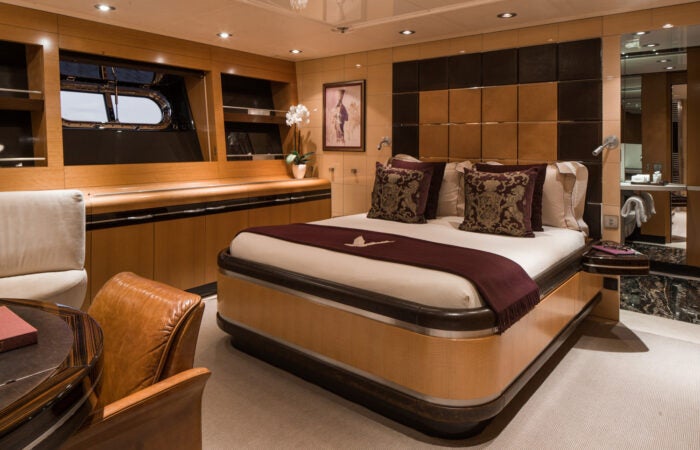 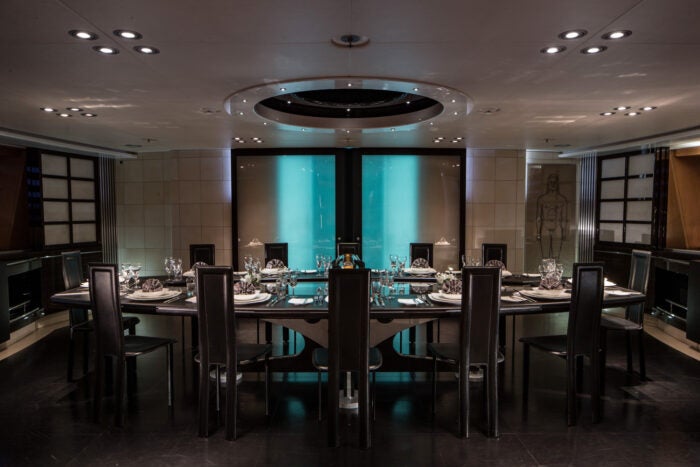 “The circular bar on the main deck aft is a focal point that seamlessly integrates the interior with the exterior deck spaces,” says Chloe Riley, the Maltese Falcon’s charter broker at SuperYachtsMonaco.

Inside are two lounges and another formal dining set up, with the dining area bearing Japanese influences. The main deck is also home to a cards and games room, and modern office facilities that make it easy to work on board. All the key spaces are linked by a striking central staircase.

The exterior spaces are home to some of the Maltese Falcon’s most popular features. The central bar has played host to a wide variety of events and parties in its time. When it’s time to stop partying, there are plenty of options to sunbathe, dine or relax. Jacuzzis can be found inside and out, and recent additions to the yacht include a new spa facility with a hair salon and massage room (a qualified beauty and massage therapist sits among the 19-strong crew).

There are numerous private spaces to escape to and enjoy the experience of life on the water. “The seating area on the bridge deck forward is a lovely spot that gives a unique viewpoint when sailing,” says Riley. “But most memorable of all the features is the huge outdoor cinema set up on the upper deck, with movies able to be projected onto one of the yacht’s sails for the ultimate cinema session.” 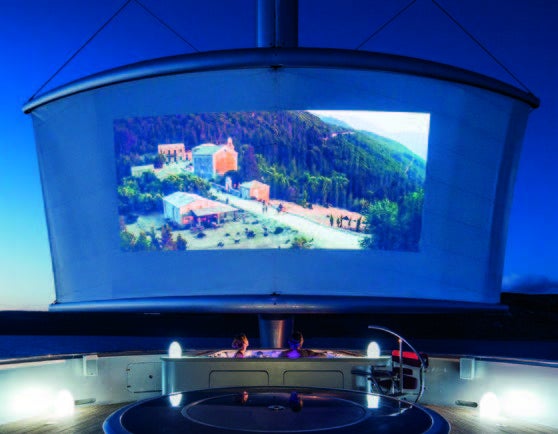 Over the years her travels have taken her all over the world, clocking close to 200,000 nm with a decent proportion under sail. “She is versatile with location and can be chartered anywhere in the world, although Greece is now the Maltese Falcon’s home,” says Riley.

Plenty of thought has been put into her charter offering, which gives a thrilling taste of all the ingredients that make superyachts so exciting including speed, high luxury and gourmet delights. As a charter favorite, it is no surprise that the Maltese Falcon also carries a rich selection of toys and tenders, and she has been set up to appeal to every kind of guest. 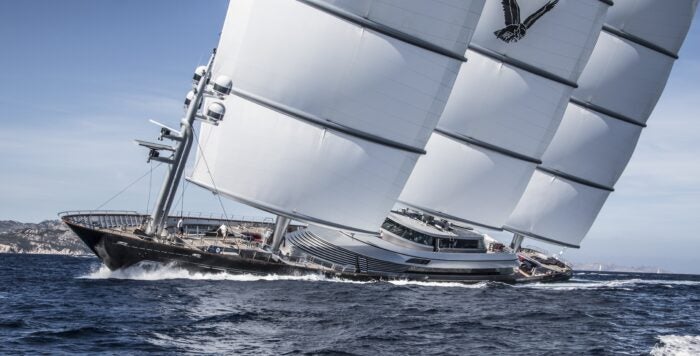 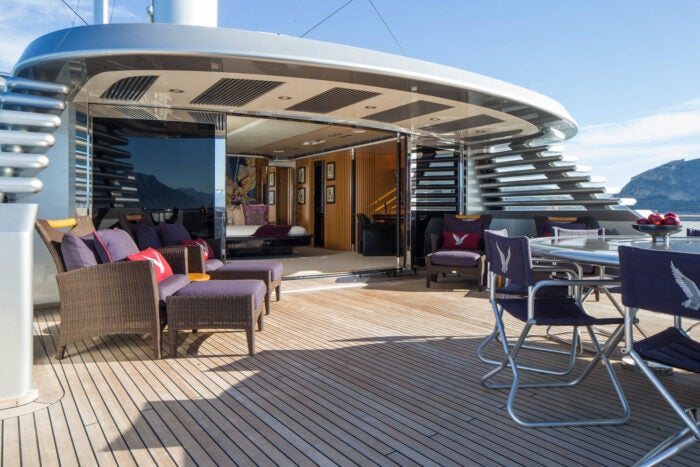 “Guests of the Maltese Falcon can enjoy the exhilarating performance of race sailing with seven-star luxury and comfort,” says Riley. “With all the best elements of motor and sailing yachts, she really is the best of both worlds.”

The Maltese Falcon is a yacht that needs to be seen to be believed, and once seen will not be forgotten. Its late creator, Perkins, summed it up beautifully when he opined: “It is not a modest thing to say, but my creation remains an unrivaled masterpiece.”