With wine produced in every single region, it is fair to say that viticulture is ingrained into the fabric of Italian culture and life. While every Italian winery and vineyard will have its own unique charm and appeal, we have rounded up the most beautiful wineries in Italy to ensure you see the best of this diverse and captivating European country.

Although our guide to Italian wineries takes you down to the southern region of Campania and on a short trip over to the island of Sicily, it is naturally Tuscany that takes center stage. Known globally for its captivating landscape, Tuscany is easily one of the country’s most scenic wine-growing areas, if not the world. If you are going to visit just one Italian wine region, Tuscany is a safe bet when it comes to beauty.

And as you would expect of an industry that relies so heavily on the natural environment, a growing number of Italian wineries are making a committed move toward more considered operations, from organic practices out on the vineyards to environmentally conscious architecture. 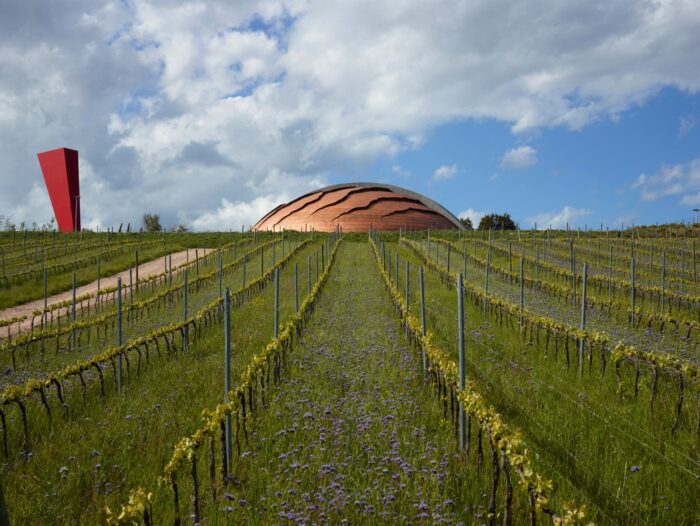 The Carapace on the Tenuta Castelbuono estate is more than just a winery; in fact, the domed structure, which appears to rise straight out of the Umbrian hills, is nothing short of a work of art. Designed by esteemed Italian sculptor Arnaldo Pomodoro, the Carapace is designed to exist in harmony with its surrounding landscape, with the intentional cracks in the copper roof replicating those seen in the earth.

The distinctive and undeniably beautiful winery is devoted to the production of Sagrantino grapes (an ancient variety that is indigenous to the region), as is the rest of the Lunelli family’s Umbrian estate. Since acquiring the 74-acre Tenuta Castelbuono estate in 2001, the Lunelli family has been focused on converting its existing vineyards to organic operations via a process that combined planting new vines and upgrading the existing ones via a complex cloning project. These efforts have ensured that the estate’s produce is certified organic.

In addition to producing uniquely delicious wines that draw wine enthusiasts from around the world, Tenuta Castelbuono’s Carapace acts as a venue for weddings, ceremonies and corporate events.

Avignonesi is one of the top Montepulciano producers, with the majority of its 400 acres of vineyards dedicated to Sangiovese. The estate is surrounded by the classic rolling hills of Tuscany, a region that is home to some of the most beautiful wineries in Italy. While the Avignonesi domain is diverse and expansive, it is the distinctive circular vines that separate this estate from the myriad of others that surround it.

Avignonesi is also committed to sustainable operations; the Tuscan estate is a leader in biodynamic viticulture and adopts an intervention-free approach in order to produce organic wines that remain true to their origin. The estate has evolved into a one-stop destination for wine enthusiasts, with a comprehensive hospitality program on offer. From cooking classes and vineyard tours to sunrise hot-air balloon rides and private dining, Avignonesi is on a mission to showcase its estate and produce in the most dynamic ways possible. 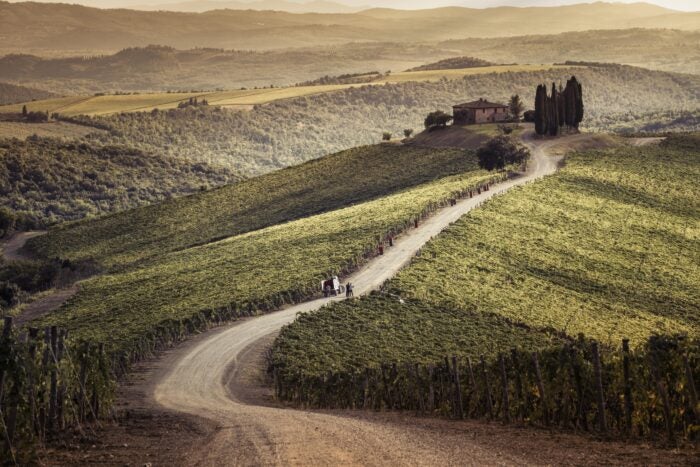 Dating back over 1,000 years, Castiglion del Bosco is a winery steeped in rich history, Italian heritage and of course wine-making tradition. The estate is spread across nearly 5,000 acres of Val d’Orcia – a Unesco World Heritage Site famed for its beauty – making it one of the largest in the region.

As with many of the most beautiful wineries and vineyards in Italy, nature is allowed to take the front seat at Castiglion del Bosco. In line with the winery’s organic viticulture, the vines receive little to no intervention and are instead allowed to operate on their own path. As a result, the estate’s four Brunello di Montalcino DOCG labels are famed for their impeccable quality.

In addition to 153 acres of vineyards and the winery, Castiglion del Bosco’s grounds include a five-star Rosewood hotel and a private golf club with an 18-hole golf course, designed to blend seamlessly with the surrounding Tuscan landscape. Castiglion’s elegant wine cellars are also home to Millecento Wine Club – one of the world’s most elite, joined by invite only.

Although the Mastroberardino family’s empire is widespread, it is the Mirabella Eclano estate that is its main wine-producing destination. Spread over a series of sloping hills in the Taurasi area of southern Italy, Mirabella Eclano primarily grows Aglianico grapes, with the presence of very old vines being characteristic. Within the 160-acre estate, you will also find the Radici Resort hotel, the Morabianca restaurant and the Mirabella Golf Club, which overlooks the vineyards.

Praised for the revival of Campanian wine-making following World War II, the Mastroberardino family saved what is now considered world-class grape varieties from potential extinction, making them an integral part of Italian wine culture – as well as a must-visit winery.

As you would imagine of a family so dedicated to preserving ancient species, sustainability is one of the estate’s core principles. The vineyards are managed organically, investments have been made into energy-saving technologies, and cultivated fields have been transformed into habitats and food sources for vital pollinators.

[See also: How to Make Your Wine Cellar as Unique as Your Collection] 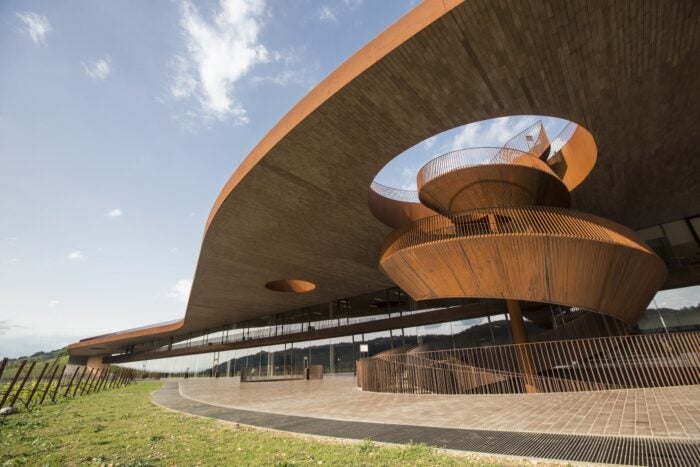 Connecting the multiple stories of Antinori nel Chianti Classico is a dramatic spiral staircase, which acts as the centerpiece of the entire winery / ©Anitnori

The magic of Tuscany has ensured that three of our tops picks of the most beautiful wineries in Italy are found within this world-famous region – and for good reason, considering the unrivaled quality of wines that the area produces. Our third Tuscan winery is similar to the Tenuta Castelbuono in that while the vineyards are beautiful, it is the estate’s astounding design by revered designer Marco Casamonti that draws visitors.

The Antinori nel Chianti Classico winery was built using only locally sourced materials and constructed in a way that both respects and celebrates the surrounding environment. The result is a structure that is almost invisible against the landscape; the three-level building seemingly folds into the Tuscan hills, with the tiered roof entirely covered in functioning farmland. The lowest level is dedicated to wine storage and production, while the second holds a museum, wine-tasting area and library. Connecting the multiple stories is a dramatic spiral staircase, which acts as the centerpiece of the entire winery.

While the Antinori nel Chianti Classico is architecturally stunning, it was of course designed for functionality and wine-making excellence. The structure was built for gravity flow vinification (i.e., pump-free) and to guarantee ideal climatic conditions for wine production and aging by using completely natural elements. 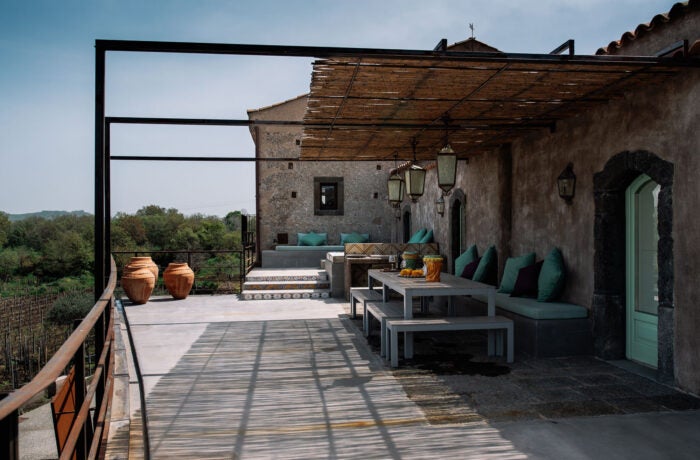 While Tuscany may be the beating heart of wine production in Italy, this isn’t to say the rest of the country is lacking; the island of Sicily, in particular, is home to a significant number of beautiful vineyards and wineries. On the island, hiding in the shadow of Mount Etna, you will find the picturesque Tenuta di Fessina winery, which aims to showcase the heritage, landscape and, of course, wine of Sicily.

At the winery, of which the building dates back to the 17th century, guests can enjoy tastings of the exciting volcanic wines it produces as well indulge in the gastronomic experiences on offer, all of which celebrate seasonality, local produce and traditional cooking techniques. As part of its hospitality offering, Tenuta di Fessina also offers six expertly restored and chicly outfitted hotel rooms, all of which are decorated to celebrate archetypal Sicilian beauty – from local art to decorated lava stones – in order to continue its bid to put the Etna area on the world map.

Although Prosecco is undoubtedly the most famous Italian sparkling wine, its lesser-known sibling Franciacorta is growing a serious fan base of its own. Grown in a small region of the same name in northern Italy, unlike Prosecco, Franciacorta is actually made in a similar way to the prestigious process of Champagne, in that the second fermentation takes place in the bottle. The result is a far more complex sparkling wine with deeper flavor profiles.

While Franciacorta has a huge number of beautiful wineries, the Barone Pizzini estate deserves a very special mention thanks to its remarkable achievement of becoming the first to produce DOCG Franciacorta from organic grapes. The winery itself is an artistic modern building that sits in stark contrast against the sweeping Italian hills. A visit will include a guided tour through its stunning vineyards, followed by a trip to the cellars for an explanation of the full winemaking process. Naturally, the experience will include a guided tasting of the finest Barone Pizzini Franciacorta wines, accompanied by local delicacies.

[See also: An Expert Guide to Starting Your Own Cellar]