Picture a lush vineyard on a hot day in late summer, with bunches of ripening grapes promising a good harvest. To make great wines, the vines depend on specific conditions: sun, water, healthy soil, warm (but not too hot) temperatures and the right weather mix at the right times. Winemakers have kept track of harvest dates and yields for centuries, so they were among the first to notice the impact of a changing climate on their sensitive vines. To be sustainable in the long term, farming vines organically to save the soil is only one step. Many winemakers recognize they have to nurture the whole environment of their estates, including the animals that live there and the people that work on it. To fight climate change, they cut carbon emissions with solar and geothermal energy, track their carbon footprints and keep experimenting. The eight wineries that follow are making a huge difference in the fight to make fine wine more sustainable, but there are many, many more. 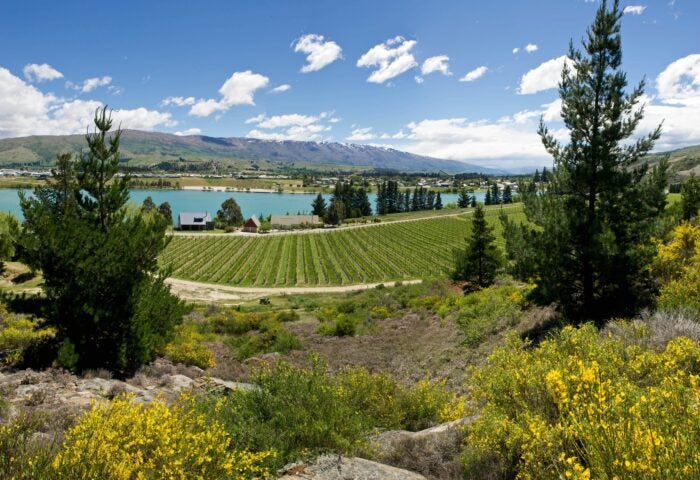 New Zealand’s wine image is clean and green, and Felton Road winery in Central Otago, one of the country’s top pinot noir producers, epitomizes that ideal. To be sustainable, says owner Nigel Greening, he abandoned the idea of constantly seeking growth, which ends up exploiting the environment and puts profits first. Everything Felton Road does is evaluated for its impact, starting with organic and biodynamic vineyards. Rather than spray or burn the wild roses taking over hillsides, it brought in African Boer goats to chew them up. No waste treatment plant is needed because Felton Road reuses everything, in compost, in creating brandy, or in some other way. Labels are printed with water-based inks. But the single greatest carbon input for wineries, Greening explains, is glass and packaging. To minimize its carbon footprint, Felton Road switched to bottles that are 22% lighter and pack them in recycled cardboard boxes, which reduces the amount of energy required for shipping and distribution.

[See also: Four Beautiful Wine Estates From Around the World] 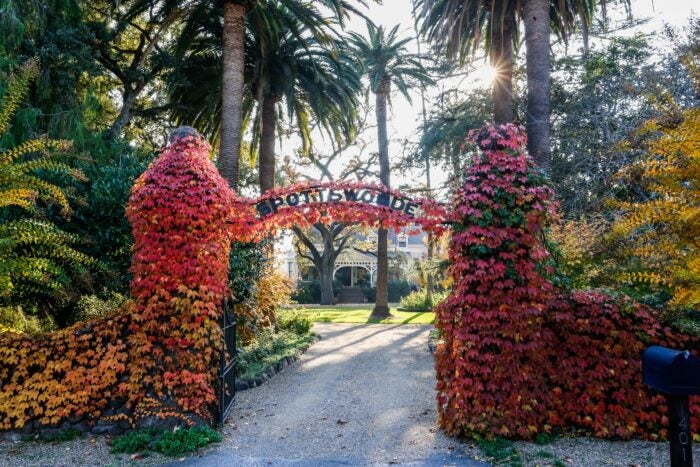 The entrance to the Spottswoode estate / ©Spottswoode

One of the most idyllic wineries in the Napa Valley, Spottswoode is 50 years old this year, and environmental leadership is part of its history. In 1985, it was one of the first wineries in the valley to farm organically, was certified organic in 1992, and is now certified biodynamic (a holistic form of farming), too. Bird boxes and insectaries dot the vineyards. Beth Novak Milliken (read our exclusive interview with her here), the second generation to run the family winery, nurtures the winery’s land and workers (while still making elegant great wines), but also sees the importance of being part of local and global initiatives like International Wineries for Climate Action. Since 2007, Spottswoode has given more than $800,000 to nonprofit organization 1% for the Planet. Milliken also believes obtaining certifications are essential to make sustainability efforts more transparent for consumers. Last year, it became the first Napa winery to achieve rigorous B Corp certification, which measures both a company’s environmental impact and what it is doing for workers and the community. 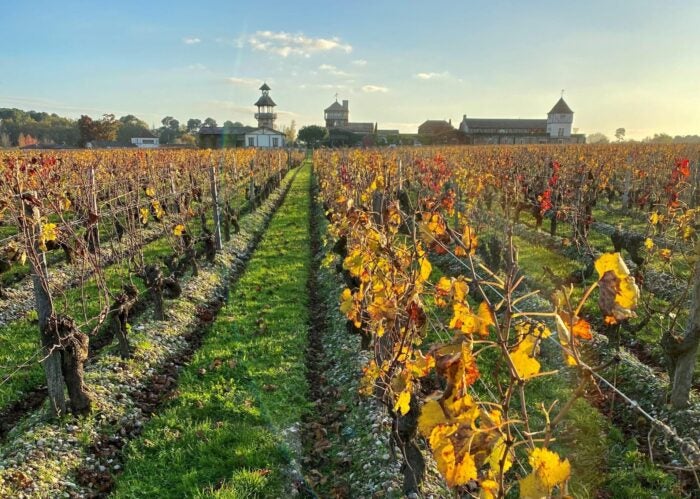 In 1990, ex-Olympic skiers Florence and Daniel Cathiard spotted run-down Château Smith Haut Lafitte in Bordeaux from a helicopter and bought it. Since then, they’ve banished chemicals from the vineyards, relying on natural herbal medicines for the vines (phytotherapy), and fight pests through sexual confusion, a way of disrupting the mating of harmful insects. Horses, not tractors, plow between vines to save fragile soil areas. And that’s not all — they’ve been leaders in the region in creating an entire ecosystem. An energy self-sufficient underground ‘stealth cellar’ for the estate’s second wines relies on geothermal and solar power. And who says recycling is dull? At the estate’s Sources de Caudalie vinotherapy spa, founded by daughter Mathilde and her husband, discarded grape seeds and vine cuttings turn into lauded beauty products. Most intriguing is the winery’s carbon-capture system, the world’s first to recycle the CO2 released by fermenting grapes into bicarbonate of soda. That got the Cathiards an invite to speak at COP21, the UN’s 2015 Climate Conference in Paris. 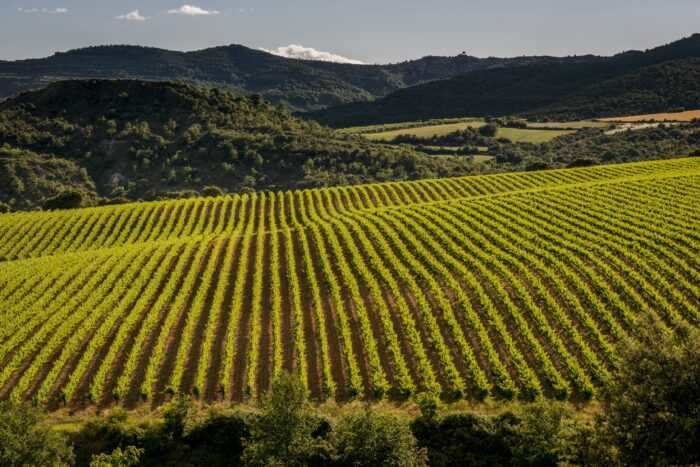 The wine world’s most vocal evangelist for sustainability has long been Miguel Torres Sr, patriarch of this 150-year-old Spanish wine company with family outposts in Chile and California. Inspired by the 2007 climate change documentary An Inconvenient Truth, Torres is passionate about reducing CO2 emissions that boost warming, tirelessly urges others to join him, and co-founded International Wineries for Climate Action to decarbonize the wine industry. He and his son Miguel Torres Maczassek, now the company’s general manager, pump 11% of the company’s annual profits into the environment and fighting climate change. Energy efficiency is their watchword. If you tour Bodegas Torres Wine Center in Pacs del Penedès, you’ll whiz around in a solar-powered sightseeing train. At Waltraud winery, the white sand covered roof reflects solar energy and reduces air-conditioning needs. A biomass boiler transforms pruned vine shoots into heat and electricity. My favorite of the family’s current projects is their effort to bring back ancestral grape varieties that can adapt to the drought and warming brought about by climate change. The top one, so far, is 2016 Torres Forcada. 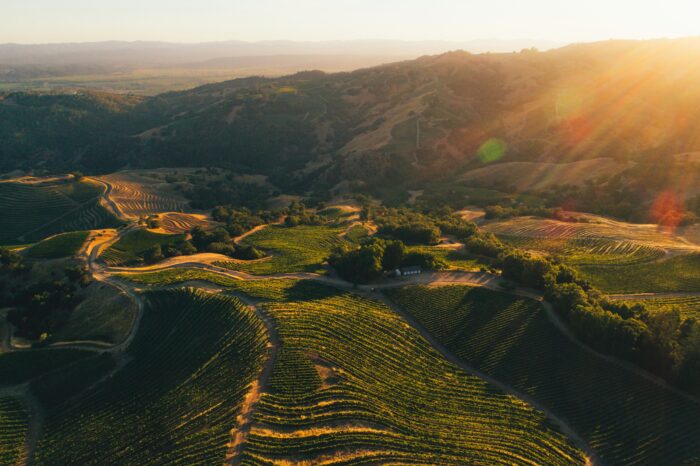 Founded in 1982, Sonoma-based Kendall-Jackson winery made its mark with popular Vintner’s Reserve Chardonnay. Now this family-owned company encompasses more than 40 premium wineries on five continents. So it was a big deal when Jackson Family Wines launched a formal sustainability program in 2008 with environmental, social and community goals. Today, the in-house sustainability champion is second-generation Katie Jackson, 34, senior VP of corporate and social responsibility. Under her leadership, the company became the largest generator of on-site solar energy in the US wine industry, began issuing regular progress reports on their actions, and co-founded International Wineries for Climate Action. Helping future winemakers understand the latest innovations is one of their most important contributions. They funded the Jess S. Jackson Sustainable Winery Building at University of California at Davis, the first self-sustainable, zero-carbon teaching and research facility in the world. 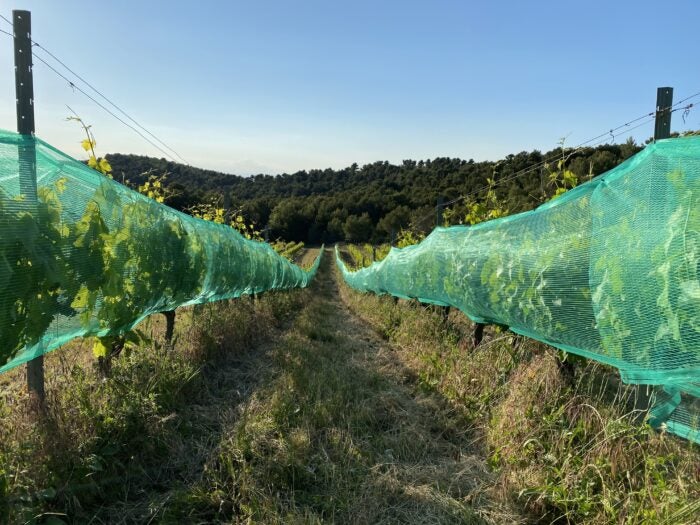 Chêne Bleu was an abandoned estate when Xavier Rolet took it on, then spent 15 years restoring it / ©Chêne Bleu

In the foothills of Mont Ventoux in southern France, in a pristine Unesco biosphere reserve, you’ll find award-winning winery Chêne Bleu. It was an abandoned estate when committed conservationist Xavier Rolet (once the London Stock Exchange’s CEO) took it on, then spent 15 years restoring it with his wife, Nicole, and his wine-growing sister and brother-in-law. No toxic chemicals were used in the vineyard, now farmed organically and biodynamically. They planted a half-hectare bamboo forest behind the winery to filter wastewater naturally, part of their zero-impact plan. But with Sustaina-BEE-lity, or Beehives for Biodiversity, they hope to involve other winemakers.

The project began with a 2019 crowdfunding campaign for research into bees and wines with renowned bee and soil experts to answer this question: Could bees help make vines more resilient, make better wine, enhance nature, improve profits and decrease long-term risks? As a teen, Xavier Rolet became interested in beekeeping and set up hives near a Chêne Bleu old grenache vineyard. When some parts of it started to thrive, with higher yields, the team noticed cover crops between the rows were plusher, too. Winemakers encourage wildflowers and other plants to grow between rows because they help soil retain water and increase microbes that keep it healthy. Bees seem to help expand the biodiversity of this delicate ecosystem. Could they help wineries shift more quickly to organic viticulture, with less cost? The Rolets hope so. Pesticides are to blame for the worrying decline in bee populations worldwide, so this idea may help save the bees, too. So far, a number of wineries have expressed interest in joining. The Douro Valley in Portugal / ©The Fladgate Partnership

In Portugal’s Douro Valley, Adrian Bridge, CEO of The Fladgate Partnership of port brands and tourism initiatives, admits he’s focused and driven, and thrives on challenges. He’s been a successful investment banker; climbed Mount Kilimanjaro and a peak in Antarctica; expanded Taylor’s Port into an empire of great port houses, award-winning hotels and restaurants; and debuted World of Wine, an ambitious tourism project in Porto. In the past three years, he’s taken on climate change in a big, dramatic way, by pulling wineries and industry players together and urging them to make great contributions toward finding practical solutions. His first step, in 2018, was a Climate Change Porto Leadership Summit that featured former US President Barack Obama, followed by another in 2019.

The outcome from these conferences is an even more important action: an international nonprofit organization, The Porto Protocol. It hosts an online platform that is really a virtual think tank on sustainability, illustrating why collaboration is so important in finding solutions. In one accessible spot, the site brings together news, research, inspiring ideas, resources and regular climate talks. It’s a place winemakers can turn to for the latest information on everything from Frugalpac paper bottles to the Symington Port family’s rewilding projects to how New Zealand wine producer 3sixty2 achieved carbon positive status. The protocol’s members share their own experiments and how they’ve worked. Already the organization is highly successful, with hundreds of corporate and individual members signing on to the Letter of Principles, and it will surely grow even more important in the future. 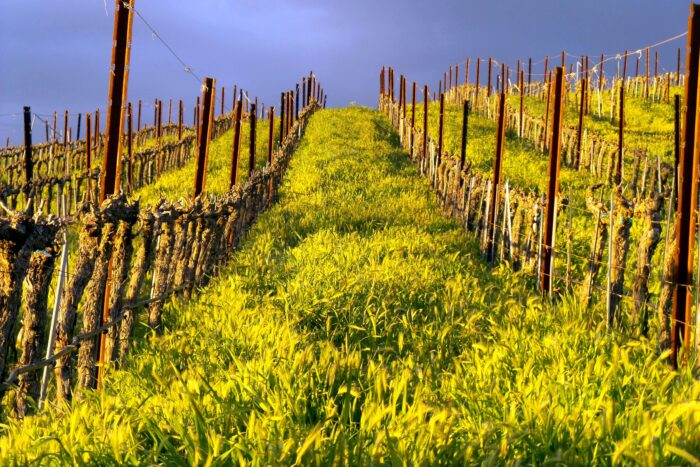 At eco-friendly Tablas Creek winery, in California’s Paso Robles region, owls zap vine-root-eating gophers, chickens gobble up destructive insects, and black-faced sheep chow down on the weeds between rows of vines, pausing from time to time to fertilize the soil. The idea, explains partner and general manager Jason Haas, is to make a wine estate an ecosystem. Recently he expanded his vision of what that means through regenerative farming, the latest wine buzzword. The Regenerative Organic Alliance invited Tablas Creek to participate in its three-year pilot certification program that ended last summer. It was the only winery among the participants. The idea of the organization is to reform agriculture to fight climate change.

Tablas Creek had been certified organic and biodynamic for decades but regenerative farming, says Haas, also includes not tilling the earth between the vine rows, to capture carbon in the soil instead of releasing it into the atmosphere. The two other farming ‘pillars’ are animal welfare and social fairness — not just paying workers a decent wage and providing good working conditions, but also involving the farming crew in decision-making. Last year, Tablas Creek became the first Regenerative Organic Certified winery in the world, and more are now in the application process. ROC, predicts Haas, is going to be the gold standard of certifications for agriculture around the world in the future. “We have to farm like the world depends upon it to repair a damaged planet.” The payoff for wine lovers is more complex reds and whites that you can feel good about drinking.

[See also: The Most Beautiful Wineries to Visit in California]