One of the oldest horoscope systems in the world, the Chinese zodiac consists of 12 animals that represent a repeating 12-year cycle. Depending on the year that a person is born, the animal that represents that year will be symbolic of the person’s attitude and personality, in a similar way that the Western zodiac (star signs) suggests personality traits. The zodiac plays a vital role in Chinese culture, with the animal that represents a person also influencing their careers, marriage prospects and even their fortunes.

Where does the Chinese zodiac come from?

Records show that the Chinese zodiac has existed for over 2,000 years, but no one knows the true origins of the horoscope. Saying that, there is one very popular legend that explains how the order of the 12 animals – rat, ox, tiger, rabbit, dragon, snake, horse, goat/sheep, monkey, rooster, fog and pig – was decided. Some suggest it was Buddha who called the animals on earth and only 12 came to him; others argue that it was the mythical Jade Emperor who wanted to designate animals to the calendar signs, and the first 12 that came to him would be chosen. 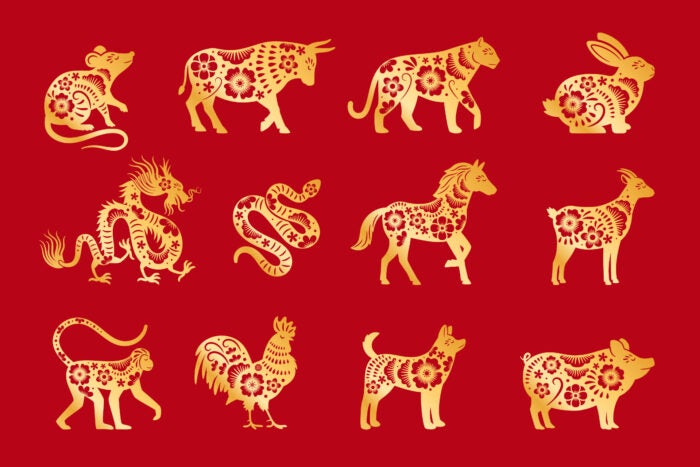 The 12 animals of the Chinese Zodiac / ©Shutterstock

Either way, a great race was held to finalize the order of the zodiac. Knowing that the ox was stronger and faster, the clever rat jumped on its back and was carried to the finish; it then leaped ahead of the ox to cross the finish line first and become the first animal in the zodiac cycle. On it went, the other animals finishing the race in the order of the Zodiac, finishing with the pig – who had taken his time with the race.

One activity that is common during Lunar New Year is to visit markets or temple fairs – similar to the Western tradition of Christmas markets – and pick up prayer scrolls, incense and a sweet treat: a sugar-work animal from the Chinese zodiac. To extend the celebrations, Rémy Martin has teamed up with the renowned sugar painter Yajun Sui and Elizabeth Hodes, a self-taught sugar artist, to create a stunning diorama of tea and Rémy Martin Cognac-flavored motifs, inspired by the Lunar New Year tradition of sharing sweet treats. A short film titled Sweet Art, presented by Rémy Martin and produced by creative boutique agency Fred & Farid, details the intricate process. Through the artist’s creative journey, the juxtaposition of Chinese and French elegance is merged into over 60 pieces of rich, amber-colored sugar designs. You can view the film below.

What does the Year of the Ox mean?

If a person is born in the Year of the Ox (recent years are 1949, 1961, 1973, 1985, 1997 and 2009), they are typically tolerant and dependable people who know that they will succeed if they focus on their task and work hard. Oxen are known for their honest natures, strength and determination – much like the hardworking animal that used to plow fields day after day. It bears resemblance to the ethos of Rémy Martin, which has worked tirelessly on the terroirs of Grande Champagne to produce fine cognac. Conversely, like their animal counterparts, people born in the Year of the Ox can also be short-tempered and stubborn, refusing to budge when they feel strongly about a topic or situation.

More widely, each of the five elements in Chinese culture (wood, fire, earth, metal and water) has energy – or chi – that blends with the corresponding animal to determine the fortune for that year. For example, both 2020 and 2021 correspond with metal. 2020 was the Year of the Metal Rat, which fortunes dictated representing change and upheaval – something that many of us felt last year. In comparison, as the Year of the Metal Ox, the horoscopes suggest that 2021 will have its own challenges but will mostly focus on perseverance, hard work, balance and rebuilding for a positive future.