Although it’s almost synonymous with the well-known Chinese New Year, the more appropriate term for the holiday that falls anywhere between January 21 and February 20 is one you might not have heard before: “Lunar New Year.” Not just celebrated in China, Lunar New Year traditions and festivities are observed by many non-Chinese Asian countries and communities around the world, in a variety of ways.

Each year, Lunar New Year falls on the first new moon of the lunar calendar, and celebrations can continue for the next 15 days until the full moon; for 2021, this is from February 12 to February 26. Based on the moon’s cycles, the lunar (or lunisolar) calendar is much older than the Western Gregorian calendar, which marks New Year’s Day as January 1.

Across the world, the Lunar New Year is seen as a time for friends and family to come together and celebrate the start of a new year; it often includes feasting, street parties and the exchange of money or gifts for good fortune. The festivities for 2021 – which marks the beginning of the Year of the Ox – might look a little different, but we’ve chosen to showcase the ways that different countries traditionally ring in the Lunar New Year. 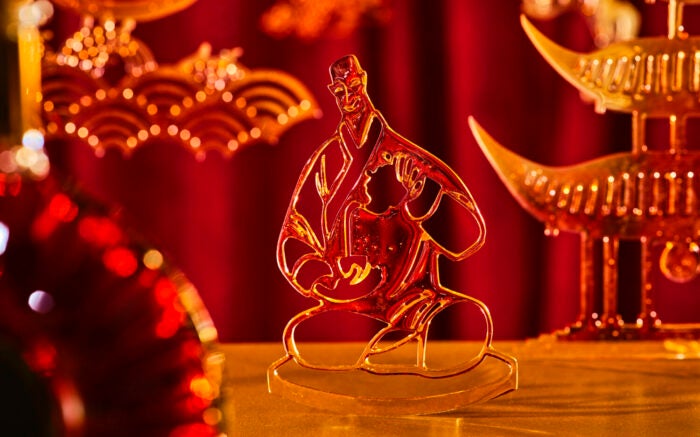 One of over 60 pieces of rich, amber-colored sugar designs created by Yajun Sui and Elizabeth Hodes

Chinese New Year is one of the biggest holidays in the country, with the New Year’s Eve family dinner seen as one of the most important meals of the year; the meal is often accompanied by drinks including Rémy Martin cognac, which represents celebration, health and prosperity. Many families also mark the beginning of the festivities with a Lunar New Year tea ceremony. This year, the House of Rémy Martin has developed a high-tea gift set to celebrate the Year of the Ox and honor this tradition.

There is a seven-day public holiday over Chinese New Year (in 2021, this is February 11-17), but the festivities can last for up to 16 days, culminating in the annual Lantern Festival. Before the new year, many families will spend time deep-cleaning their homes to clear any residual bad luck. On New Year’s Day, red envelopes – known as hóngbāo in Mandarin – are gifted from elders to children or those who are unmarried, a custom that was founded from the tradition of gifting coins to ward off evil spirits. Other festivities include lion or dragon dances and setting off fireworks or firecrackers.

One activity that is common during Lunar New Year is to visit markets or temple fairs – similar to the Western tradition of Christmas markets – and pick up prayer scrolls, incense and a sweet treat: a sugar-work animal from the Chinese zodiac. To extend the celebrations, Rémy Martin has teamed up with the renowned sugar painter Yajun Sui and Elizabeth Hodes, a self-taught sugar artist, to create a stunning diorama of tea and Rémy Martin Cognac flavored motifs, inspired by the Lunar New Year tradition of sharing sweet treats. A short film titled Sweet Art, presented by Rémy Martin and produced by creative boutique agency Fred & Farid, details the intricate process. Through the artist’s creative journey, the juxtaposition of Chinese and French elegance is merged into over 60 pieces of rich, amber-colored sugar designs. You can view the film below.

[See also: What the Year of the Ox Has in Store]

Known as Tết, or Tết Nguyên Đán, Vietnamese New Year is one of the country’s most sacred festivals, marking the arrival of spring. Celebrations often focus on the hope of good fortune and looking forward to new beginnings; these are symbolized by flowers, plants and peach trees, which can be found in markets, shops and homes. The festivities can last anywhere between three and seven days and include seeing family, paying respects to the ancestors and lots of feasting, with traditional foods including mam ngũ qu (five-fruit tray) and bánh chưng (a square cake made of sticky rice stuffed with beans and pork). 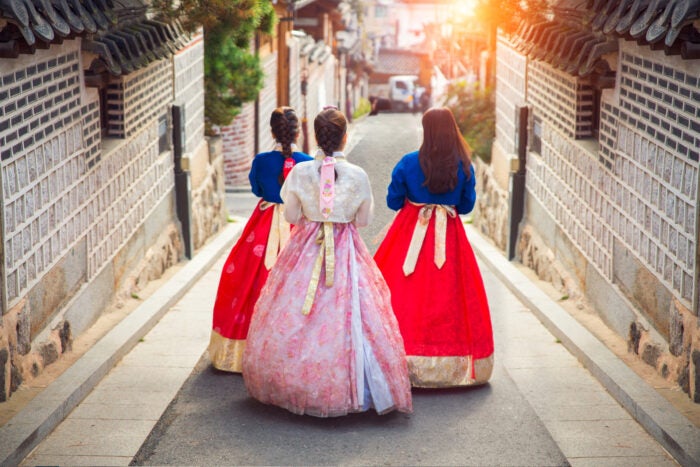 In South Korea, Lunar New Year is known as Seollal and typically lasts two or three days. During Seollal, people often dress in traditional clothes known as hanbok, play traditional games and regale one another with old folk stories. Meeting up with family and friends, performing ancestral rites and feasting are also common during the holiday. Interestingly, South Korea has a second festival around this time: Jeongwol Daeboreum, a festival that celebrates the first full moon of the lunar calendar. The main focus of this festival is the Daljip ritual, when huge bonfires are made and set alight to bring in luck for the coming year.

For many ethnically Chinese Malaysians, one of the most significant cultural events of the year takes place on the ninth day of the Chinese Lunar New Year: Pai Thnee Kong (in Penang) or Thnee Kong Sei (in Hokkien). Steeped in religion and culture, the festivities center on making offerings – anything from fruits and flowers to roasted pigs – to the Jade Emperor in order to celebrate his birthday. In Hokkien, thousands of people visit the Jade Emperor’s altar, which is specifically constructed on the Chew Jetty for the occasion. Elsewhere, those celebrating the Jade Emperor’s birthday will build altars in their houses, surrounding it with offerings. 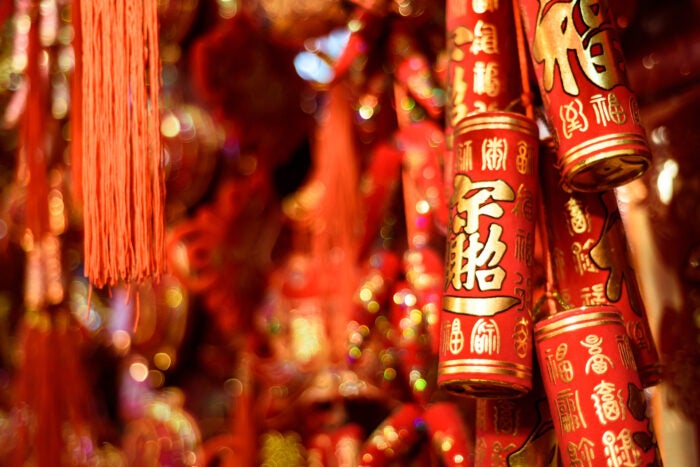 Around the world, over 1.5 billion people celebrate the Lunar New Year. Many of these people have Chinese heritage or are ethnically Chinese, which is often why Lunar New Year celebrations outside of Asia will follow the traditions found in China. For example, in Singapore, Cambodia and the Philippines, those celebrating the Lunar New Year will have firework displays, watch dragon or lion dances, cook foods traditional to Chinese New Year and participate in the red envelope tradition.

This is the same for individuals in the Chinese diaspora, whether they are now living in the US, the UK, European nations, Australia or anywhere else in the world. Though in many of these countries, there will not be a nationwide public holiday for the Lunar New Year, many major cities across the globe have their own large-scale Chinese New Year celebrations – some of the best include San Francisco, Sydney, Lima, Paris, London and New York City.