The world is in no shortage of incredible luxury watch brands. From the dominating household names such as Rolex to the specialty brands such as Panerai, there is a timepiece to suit every wrist.

However, while the wealth of choice is excellent when it comes to choosing your newest watch, separating the good from the great can be tricky, especially to those outside the mysterious world of horology.

To help, we have rounded up some of the most influential watch brands that have dominated the industry year in year out. To buy from any of the brands on this list is to buy into decades, if not centuries, of watchmaking expertise and prowess. 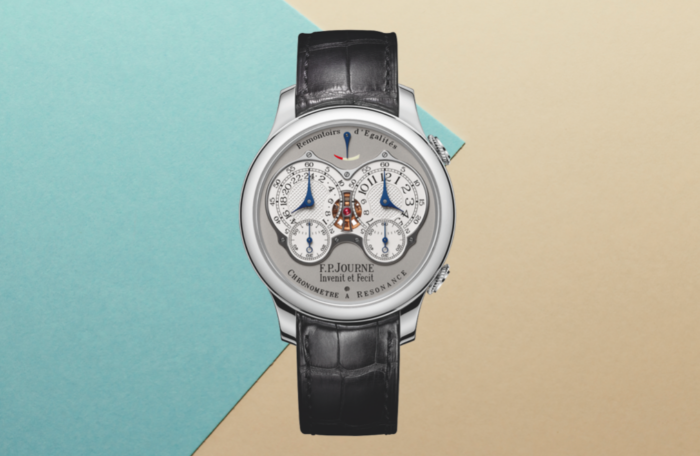 Known for its thoughtful, wearable and highly collectible timepieces, FP Journe is an undisputed leader in horology. But, despite its solid reputation the Swiss brand is surprisingly infantile having only been founded in 1999. While it may be the relative new kid on the block, FP Journe timepieces are as classic and as high quality as any of its contemporaries, with founder François-Paul Journe dedicated to longevity and precision.

To ensure that each FP Journe watch is as valuable in 200 years as the day it was made, the watchmaker only uses evergreen materials – silicones and plastics are a no go. The brand’s logo, Invenit et Fecit which is Latin for “[he] invented it and made it” relates to the fact that each component of every watch is designed and bult in house, with each movement completely original. Virtually every piece of work is performed within Journe’s Geneva studio (unlike many watchmakers who simply have showrooms in the city), with most operations performed under the watchful eye of Journe himself. 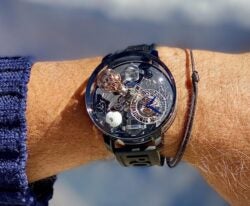 Although Jacob & Co’s offering expands beyond horology with the brand having initially launched with just fine jewelry collections, its timepieces are what cemented its status. Launched in 1986 by Jacob Arabo (who still acts as chairman) the brand is known for pushing the boundaries of watchmaking, with Arabo claiming to be driven by achieving what others deem impossible.

Each new Jacob & Co release is seemingly more outlandish than the next, with increasingly complex complications revealed each time. The famous Astronomia collection, for example, is awash with highly technical rotating parts within the intricate tourbillon. One recent charitable release even included a rock fragment from Mount Everest. Each Jacob & Co piece is more like a snow globe than a wristwatch, with a tiny world existing within every one.

In testament to the brand’s ability to keeping up with the ever-advancing world of horology, Vacheron Constantin managed to push the boundaries to release what was then the most complicated watch in the world. The Vacheron Constantin Reference 57260 pocket watch boasted a remarkable 57 complications, including three full calendar systems, a three-axis tourbillon and a world time indicator. Other stand-out pieces from the Vacheron Constantin archives include the limited-edition Tribute to Great Explorers and the Harmony Chronograph Cal. 3300, which was launched to celebrate the brand’s 260th anniversary. 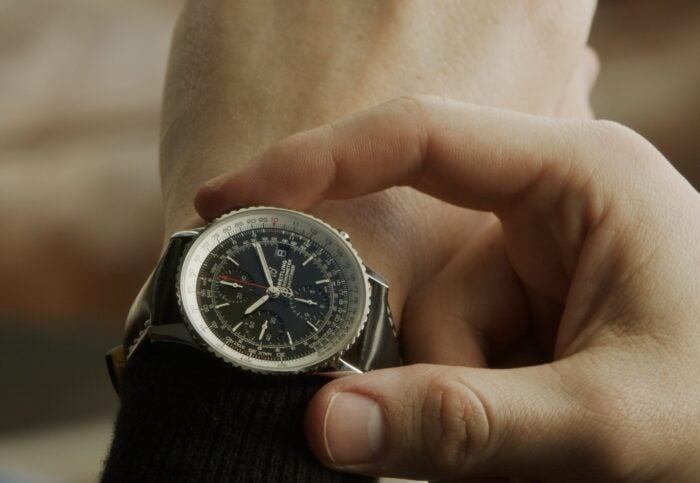 Since first launching in 1884, Breitling has proudly stood as one of the dominant names in the world of luxury watch brands / ©Breitling

Since first launching in 1884, Breitling has proudly stood as one of the dominant names in the world of luxury watch brands. Although Breitling is now led by watchmaking alumni George Kern, for the first 90 years of its life the brand was firmly family-run, having been initially founded by Léon Breitling in his St. Imier workshop.

The most iconic Breitling is easily the Navitimer. First revealed in 1952, the Navitmeter was initially designed for pilots – in fact, by 1960 an official cooperation with Aircraft Owners and Pilots Association (AOPA) had begun, cementing Breitling as the watchmaker of pilots. The Navitmeter acted as a mini computer for its wearers, with the ability to calculate the rate of climb or descent and fuel consumption, as well as complete accurate currency and distance conversions. Since then, the timepiece has been re-released a number of times, with its versatility and practicality meaning it is no longer reserved to the skies. 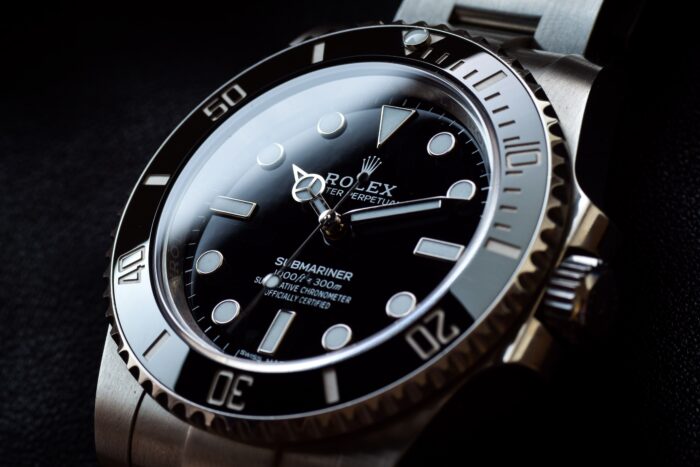 The Rolex logo is now a hallmark of luxury / ©Shutterstock

No list of the world’s most influential luxury watch brands would be complete without a mention of Rolex. While the luxury watchmaker is now based in Switzerland, it was initially founded in England in 1905 with the intention of bringing practicality and durability to the watch market. Indeed, the brand is often heralded as being one of the first large-scale wristwatch manufacturers (as opposed to the pocket watch).

Over the last century, Rolex’s reputation has grown to see the brand become one of the most revered and respected in the world; the Rolex logo is now a hallmark of luxury. And, as any brand with a following like it has should, Rolex has adeptly grown with the world around it and as the climate crisis grows ever more worrying, has committed to playing its part in limiting its environmental impact. The brand’s ‘Perpetual Planet’ mission sees Rolex collaborate with individuals and companies on a series of projects designed to safeguard the future of the planet.

While like the majority of the world’s leading watchmakers Panerai is headquartered in Switzerland, the brand breaks the mold by remaining true to its Italian heritage. Now part of the wider Richemont Group, Panerai was initially founded in Florence in 1860. Since then, it has become the go-to for reliable, high-quality and effortlessly stylish deep-sea diving watches.

And, as expected of a brand so intrinsically linked with the natural world, in recent years Panerai has also examined the environmental impact of its operations with the bold aim of becoming net-zero. Part of this mission involves reassessing the materials in each watch and how they are procured, becoming certified by the Responsible Jewellery Council and introducing waste and energy management systems to its headquarters. 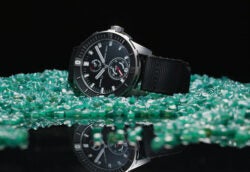 Another watchmaker catering to the world’s adventurers is Ulysse Nardin which, having been founded in 1846, has a serious legacy under its belt. The brands’ eponymous founder was himself fascinated by the ocean, leading him to create the world’s first-ever marine chronometer. The influence of the brand was so large in fact, that by the early 1900s, Ulysse Nardin was delivering watches directly to the US Navy.

Like Panerai, Ulysse Nardin has also come to realize that as a watch brand that has the ocean to thank for its success, it has a moral obligation to work in harmony with the natural world. As such, Ulysse Nardin has outlined a series of sustainable development goals that align with the UN goals for ocean protection. Embodying this commitment is the Diver Net concept watch, made entirely from upcycled plastic fishing nets. 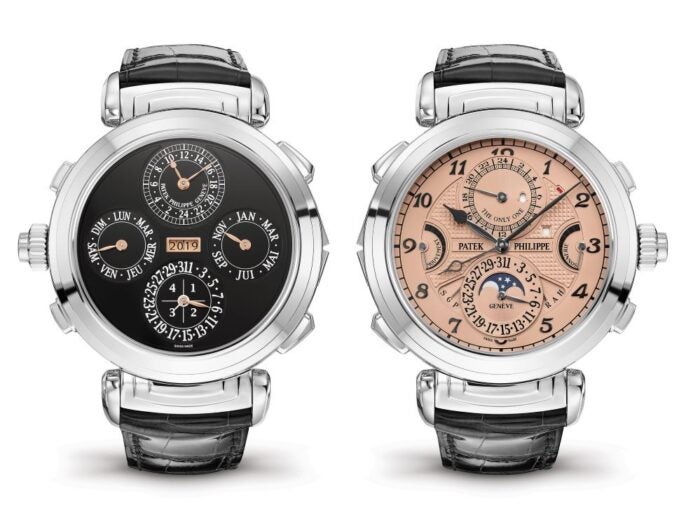 The most expensive watch ever sold at auction was the Patek Philippe Grandmaster Chime 6300A-010 which sold for over $31.19m at the Only Watch Auction in 2019 / ©Patek Philippe

In most horology experts’ opinions, if watchmaking was an Olympic sport, Patek Philippe would take home gold every time. The family-owned brand dominates the list of the most expensive watches ever sold at auction with its pieces some of, if not the, most coveted on the market. However, despite this amazing insider reputation, the brand hasn’t achieved the household status of some of its counterparts – but for those in the know, it is this level of elusiveness that makes Patek Philippe what it is.

Dating back to 1839, all Patek Philippe watches are manufactured to painstakingly specific standards in a vertically integrated production line. Everything is done in-house by skilled horologists, using a series of niche techniques and processes – so niche, in fact, that the brand has over 100 patents, securing the exclusivity of its timepieces.