Once upon a time, the Lady Moura yacht dominated the industry. When she was first delivered in 1990 by German shipbuilders Blohm+Voss, she was one of the biggest and most expensive yachts the industry had ever seen. While much has changed in the world of yachting in 30 years and Lady Moura has admittedly been usurped by newer and larger vessels, to many she remains the original superyacht.

Measuring in at 344 feet, Lady Moura was the ninth-largest yacht in the world when she was first built, and although she’s now moved down that list, her 6,500GT volume still impresses in a more modern market. Although she has primarily remained a stationary vessel, the superyacht is capable of covering over 8,000 nautical miles when traveling at her cruising speed of 17 knots (although her top speed in 20 knots).

Up until now, Lady Moura has only had one owner – Saudi businessman, Nasser Al-Rashid, who has used the private yacht to host many noteworthy guests, including politicians and royal families. However, in the past few years it was revealed that the Lady Moura yacht would be available for purchase for the first time since she was built, meaning that the veil of mystery she has been shrouded in for 30 years has finally been removed.

As a yacht designed for prolonged onboard family living rather than just short-term cruising, Lady Moura’s interiors are impressively comfortable and luxurious – even by superyacht standards. Despite receiving a significant refit in 2017, Lady Moura has retained much of her original interior, which acts as a testament to the skill of her designer, Italian-born Luigi Sturchio, as well as the impeccable level of care from the crew in her 30-year lifetime. 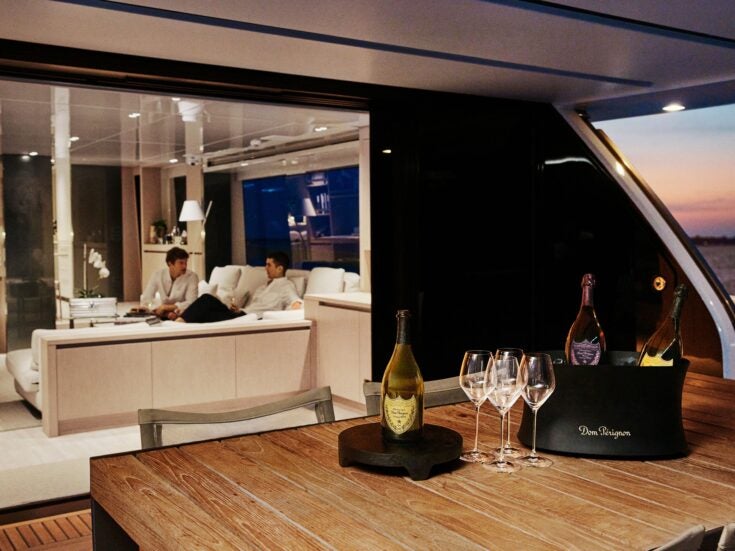 Benetti B.Yond 37M: The Greenest Yacht in its Class 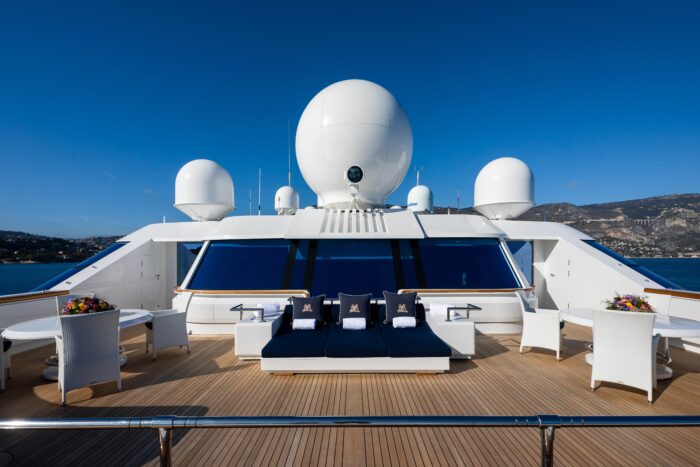 In the past few years, it was revealed that the Lady Moura yacht would be available for purchase for the first time since she was built / ©Camper & Nicholsons International 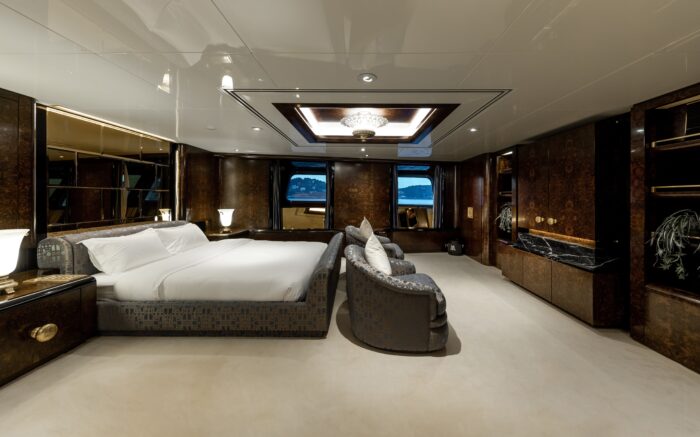 The ship offers 27,986 sq ft of private guest space, with the entirety of one of its seven decks dedicated exclusively to family living. The vessel can accommodate up to 26 guests across 13 cabins, subject to PYC compliance, with additional space for 65 crew members, making for a desirable guest to staff ratio. Lady Moura’s interior is lavish: think opulent marble details, plush soft furnishings and rich mahogany furniture in the lounges and bedrooms, with wicker and nautical stripes in the chic beach club.

As you would expect on a luxury yacht of this magnitude, the owner’s cabin onboard the Lady Maura is vast – in fact, the full-beam VIP cabin outsizes the owner’s accommodation in many other ships. Occupying the entire aft half of one deck, the owner’s suite includes the main sleeping cabin that leads directly onto a private terrace, a secondary cabin, a dressing room and a lobby area.

In addition to her extensive accommodations, the Lady Moura yacht is awash with recreational space. On her top deck, you will find an indoor swimming pool complete with a retractable roof, a spa with a sauna and hot tub, and full gym facilities.

Thanks to the ship’s thoughtful design, the beach club (which was one of the first seen onboard a superyacht) can theoretically be enjoyed open air at all times – even when cruising – making it the height of functionality. Off the beach club are not one but two balconies with boarding platforms, both offering access to the ocean. 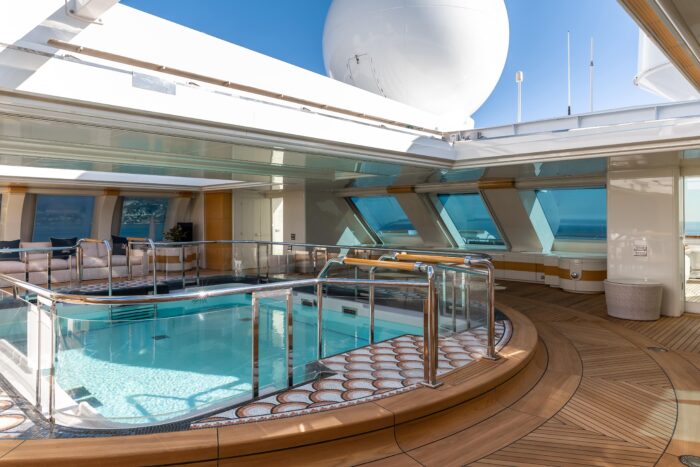 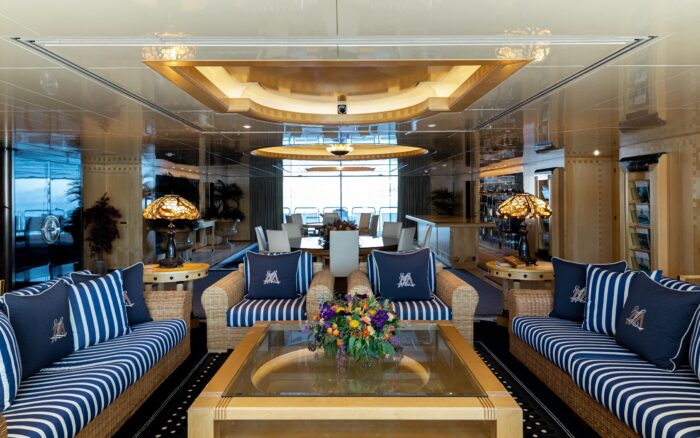 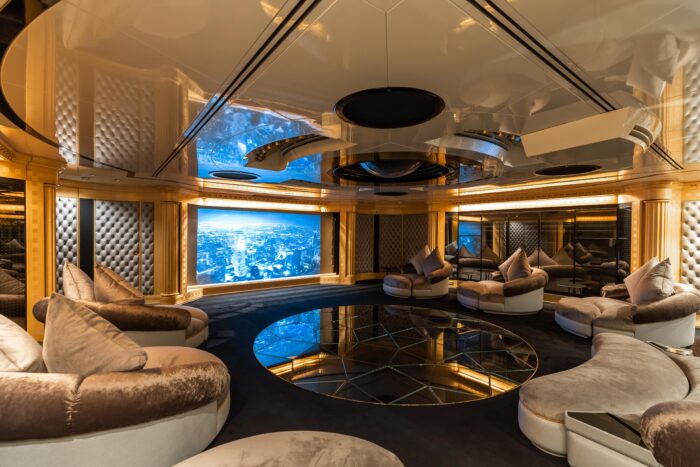 Lady Moura also offers a full-size helipad, which in recent years has received a significant upgrade. Her original blue concrete was replaced with a neutral-colored blue pad for a touch of modernization, which makes it one of the few aesthetic updates that Lady Moura has had in her lifetime. More amenities are discreetly stowed in a mid-level boat garage, including a Boston Whaler, waterski boat and landing craft, all of which are accessed by sleek, hydraulically operated doors.

As a family vessel, children’s entertainment is catered for onboard. Aside from the expansive beach club, Lady Moura also boasts a kid’s room on her bridge deck, which doubles up as a video game zone.

Lady Moura is also the perfect vessel for hosting, with a formal dining room providing space for up to 24 guests and multiple lounges, as well as a movie theatre and DJ booth/dance floor. In the interest of guest safety, there is also a fully equipped medical center onboard.

[See also: These are the Yacht Interior Designers You Need to Know] 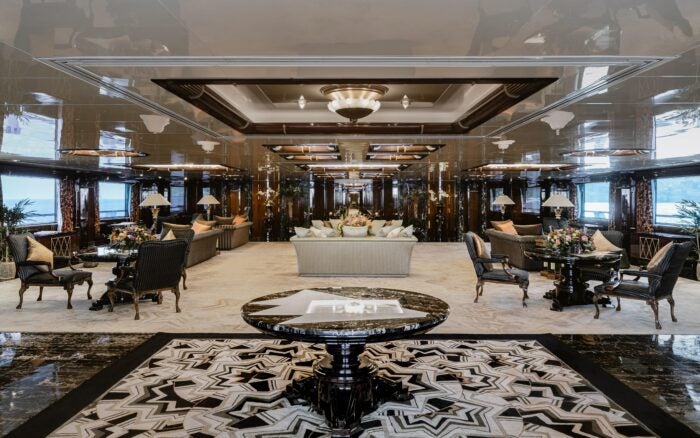 The ship offers 27,986 sq ft of private guest space, with the entirety of one of its seven decks dedicated exclusively to family living / ©Camper & Nicholsons International Lady Moura is the perfect vessel for hosting, with a formal dining room providing space for up to 24 guests / ©Camper & Nicholsons International

[See more: A First Look at Interiors Onboard Superyacht Somnio]

The truth is Lady Moura isn’t much of an explorer. This isn’t to say she can’t, however – in fact, there is room for up to three months’ worth of provisions on board and she can cruise for up to 12,000 nautical miles without needing to refuel. But to date, her owner hasn’t tested her capacities with any conviction, with her furthest voyage being a trip to the Caribbean in the nineties.

Speaking to BOAT International in mid-2020, Lady Moura’s captain Matthias Bosse revealed that the ship only has around 13,500 traveling hours, which is a remarkably low number for a yacht of her age. Instead of traveling the four corners of the world, the superyacht is usually used as a residential dwelling in the south of France and has never been available for charter.

However, with the spectacular vessel now on the market for the first time, the future may be more adventurous for Lady Moura – her captain was keen to share that apart from the Arctic zones (which require a stronger steel hull), she can navigate virtually any of the world’s vast oceans.

The Lady Moura yacht is listed with Camper & Nicholsons, POA. 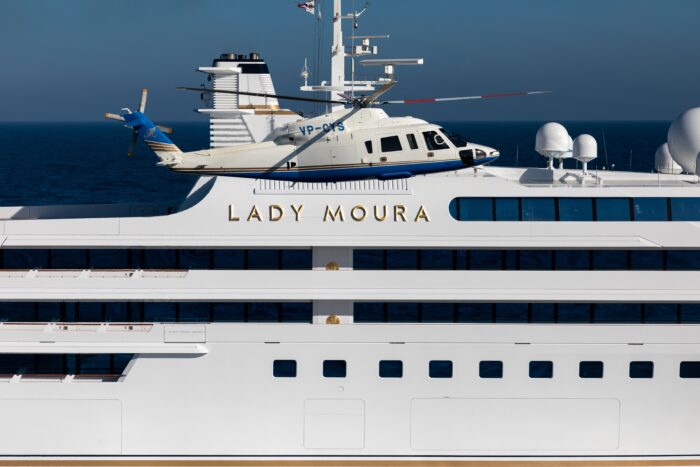 With the spectacular vessel now on the market for the first time, the future may be more adventurous for Lady Moura / ©Camper & Nicholsons International