“The British cook is a foolish woman who should be turned into a pillar of salt which she never knows how to use,” Oscar Wilde once quipped in 1885. The UK, once a nation mocked across the globe for its cuisine, has been quietly and steadfastly shifting its relationship with fine dining in the shadows of its European neighbors across the Atlantic, as its eight three-Michelin-star restaurants attest.

The proof lies in the pudding, so to speak. With a total of 166 Michelin-starred restaurants across the country, eight have achieved the highest accolade within the world of cuisine of three Michelin stars.

Admittedly, up until L’Enclume of the Lake District was added in early 2022- the list’s latest addition- all other three-Michelin-star restaurants were based in London and the South East. L’Enclume’s entry is reminiscent of a similar excitement to the 2021 entries of Core by Clare Smyth and Helene Darroze at The Connaught, which saw female chefs awarded the prestigious award for the first time in the country’s history.

Elite Traveler takes a closer look at all eight three-Michelin-star restaurants in the UK.

Alain Ducasse at The Dorchester 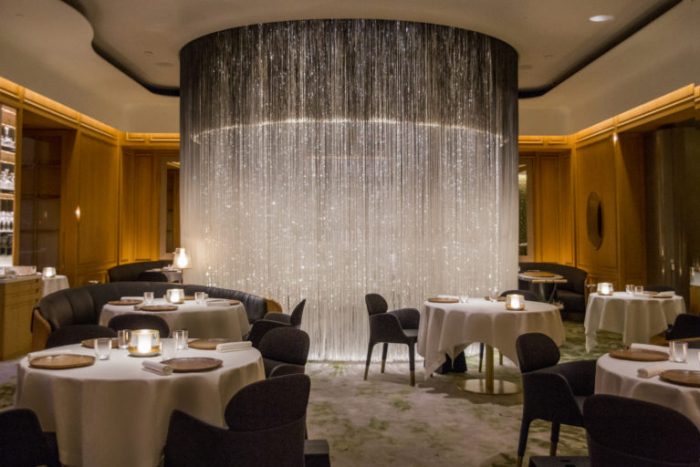 One of the most esteemed of all French chefs, Alian Ducasse has built a culinary empire that spans 34 restaurants across seven countries, amassing a total of 21 Michelin stars, only surpassed by his fellow countryman, the late Joël Robuchon.

Claiming three of those Michelin stars is Alain Ducasse at The Dorchester, the French chef’s only British restaurant. Located on the first floor of the iconic Dorchester Hotel overlooking Park Lane, it has held three Michelin stars since 2010.

The centerpiece of the restaurant is the shimmering ‘Table Lumière’, a luminescent curtain of 4,500 twinkly fiber optics, which acts as one of London’s most coveted private dining spaces. The dining room is elegant, as is the food. Ducasse’s signature stamp of sophisticated and contemporary French haute-cuisine is executed by executive chef Jean-Philippe Blondet, who like Ducasse, is a champion of fine seasonal produce. Classics like ‘sauté gourmand’ of lobster are served alongside more original dishes like caramelized celeriac with fermented hazelnut and citrus from the restaurant’s vegetarian menu (Menu Jardin). 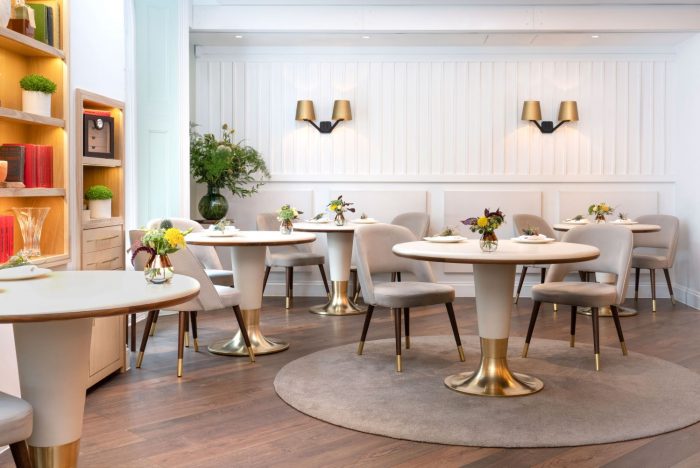 Northern Irish chef Clare Smyth opened CORE in 2017 to high expectations. As Gordon Ramsay’s protege, she left his three-Michelin-star London restaurant to go it alone. And what a great decision that was.

CORE has a more laid-back vibe than many of the other restaurants on our list, something that Smyth describes as “casual luxury”. The dishes follow a similar theme;  simple sustainably sourced high-quality British produce is transformed into beautifully crafted dishes.

Don’t let the simplicity of the menu fool you. Smyth has a unique knack for turning seemingly ordinary ingredients into something special (The ‘Lamb Carrot’ which features braised lamb but with the carrot front and center, is something of staple). The signature dish is the understated ‘Potato and roe’ which features decadent dulse beurre blanc and herring and trout roe. 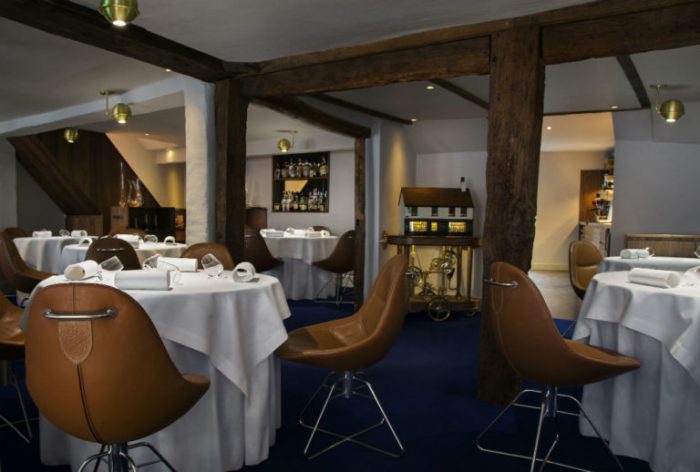 Often lauded as one of the world’s best fine-dining restaurants, Heston Blumenthal’s Fat Duck has been drawing foodies to the village of Bray, near Windsor, for over a quarter of a century.

Credited with taking molecular gastronomy mainstream (though Blumenthal is said to dislike the elitist connotations of the phrase), The Fat Duck is a delight for the senses as art, chemistry and ingredients all come together to take diners on a culinary adventure.

To sample Blumenthal’s latest offering, Anthology, which celebrates the eatery’s 25 years, one doesn’t reserve a table, instead, you must “book a ticket”. Anthology features a new seasonal menu – or Volume – each quarter, which explores the chef’s most celebrated and wondrous dishes. Volume 1 has seen the return of his famed Snail porridge as well as Nitro poached green tea and lime mousse. Booking in advance is a must.

Hélène Darroze at The Connaught 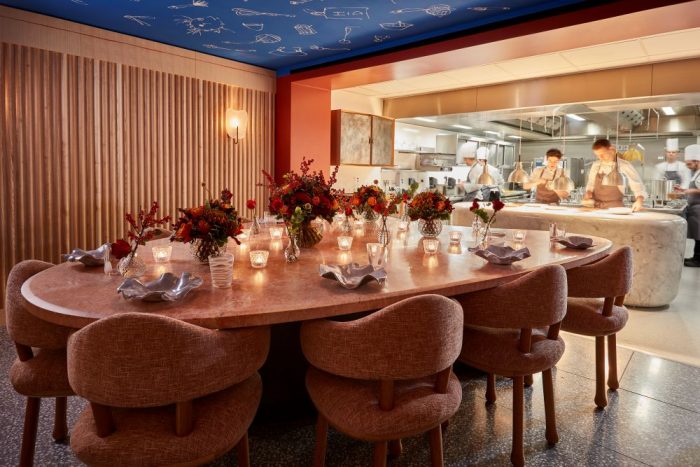 French chef Hélène Darroze began her career working for Alain Ducasse at the famed Le Louis XV in Monaco in the early 1990s before going on to receive critical acclaim for her Michelin-starred Paris eatery. In 2008, the Connaught came calling and Darroze opened the doors of her namesake restaurant within the landmark hotel.

Following a multimillion refurbishment in 2019, the restaurant reopened with a slightly less formal look complete with two Damian Hearst butterfly collages and a beautiful pink marble chef’s table overlooking the kitchen. In 2021, she became the first French female chef to achieve three-Michelin-star status in the UK as the restaurant was elevated from its longstanding two stars.

The fourth-generation chef splits her time between her London and Paris restaurants with Darroze placing her UK restaurant in the capable hands of head chef Marco Zampese while she is away. The menu offers fresh seasonal produce, carefully selected by Darroze with French, as well as British and international, influences. The Cornish brown and spider crabs with pomelo and lampong pepper is a real highlight. 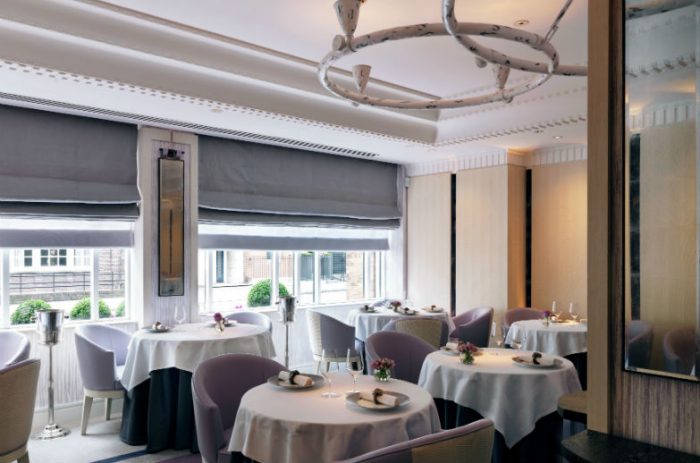 Retaining three Michelin stars since 2001, Restaurant Gordon Ramsay is one of the longest-standing three-Michelin-starred restaurants in not only the UK but the world. Ramsay, who himself needs no introduction, now co-owns the restaurant with head chef Matt Abé, who channels Ramsay’s approach to culinary excellence into every dish that leaves the pass.

The menu features your more typical Ramsay modern-French-style dishes like the incredible Ravioli of lobster, langoustine and salmon, alongside newer dishes such as Organic spelt with artichoke, maitake mushroom and black garlic from the vegetarian menu. Abé’s new Carte Blanche menu was introduced at the end of 2020 and features a bespoke selection of delights utilizing seasonal ingredients sourced from the best producers and artisans from across the globe.

Ramsay’s flagship London eatery has an intimate ambiance and with just 14 tables, diners are offered just the right level of attention. 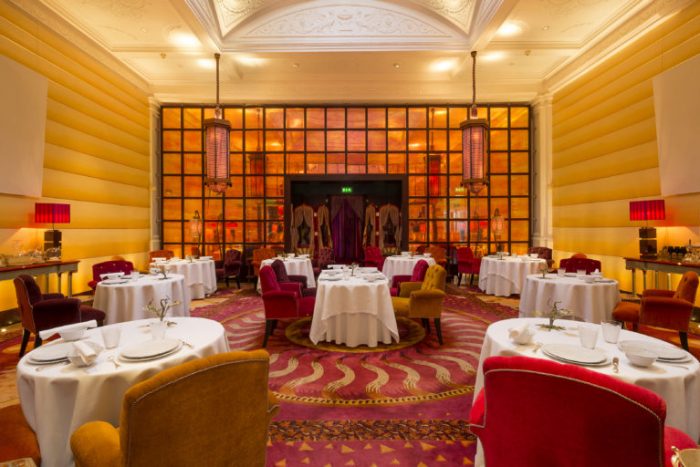 Another eatery on our guide to all eight three-Michelin-star restaurants in the UK is the Lecture Room & Library at Sketch.

Haute-cuisine by the remarkable chef Pierre Gagnaire is served up upon the second floor of the fashionable Grade II listed surrounds of Christian Dior’s former London HQ,  just above the playful pink-hued parlor on the ground floor.

Gagnaire has entrusted head chef Johannes Nuding with executing a generous menu adorned with the famed chef’s trademarks. Finely executed dishes such as Scottish langoustines five-ways and salt-chamber duck marinated with coffee beans sit alongside delectable wine pairings. The sweet feast that is the ‘Grand Dessert’ is a must-try.

Another legendary eatery awaits diner’s in the Berkshire village of Bray: the beautifully situated Waterside Inn.

Guests are warmly welcomed to this Thameside restaurant, which was opened in 1972 by the late Michel and Albert Roux (five years after the brothers opened the iconic, Le Gavroche). The Waterside Inn is now one of the longest-standing Michelin-starred restaurants in the UK but it is still as relevant as it was nearly 50 years ago. Now helmed by Alain Roux, Michel’s son, the ambiance is elegant yet relaxed. 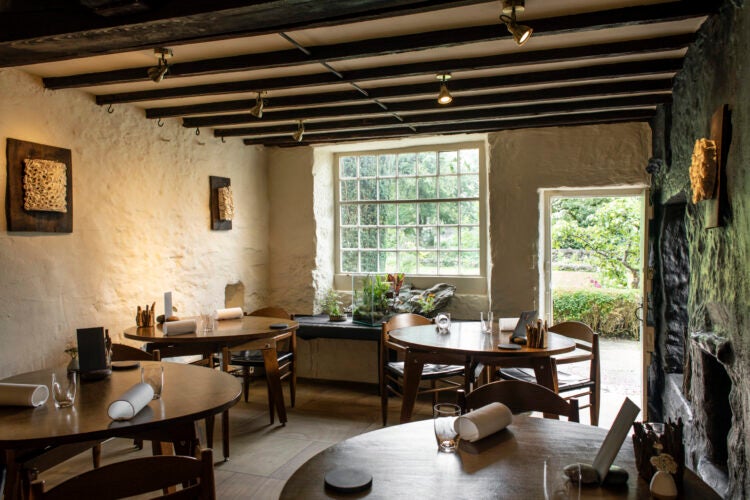 The first restaurant to be awarded the elusive and highly exclusive three-Michelin-stars outside of the South East is found lodged right under the skin of the Lake District.

And with the Lake District considered one of the most beautiful districts of the country- if not continent- it is high praise indeed, therefore, that Michelin declared few restaurants have ever been more successful in representing their local region.

Headed by head chef Simon Rogan, who has a total of five Michelin stars under his belt, L’Enclume boasts a menu of classic favorites redefined for the modern palette. The freshness of the produce is particularly noteworthy- as would be expected by having a 12-acre farm next door.