No culinary movement has garnered quite the same level of traction in the past 10 years as veganism. From meatless ‘meat’ brands to fast-food chains, everyone has been clambering over themselves for a slice of the vegan market. Everyone, that is, but fine-dining restaurants, with many of the best eateries in the world slow to cater to the growing vegan demographic.

That, however, is changing, with certain global cities leading the way when it comes to vegan fine dining options. And even some of the world’s leading chefs are starting to broaden their horizons. Last year saw the legendary Alain Ducasse open Sapid in Paris, a restaurant serving a 95% plant-based menu. And later this summer, the team behind California’s three-Michelin-star Single Thread is set to open Little Saint, a dedicated plant-based restaurant in foodie hotspot Healdsburg.

Despite these new openings and the increased chance of the odd plant-based option appearing on a menu, it can still be difficult for the vegans (and flexitarians) amongst us to find a solely vegan fine-dining restaurant or even one that offers a vegan menu. Rarer still is the chance of uncovering a vegan restaurant with a Michelin star.

To solve this, all of the restaurants included on our shortlist of the best vegan restaurants in the world have attained at least one Michelin star. Many have also earned a Michelin Green Star, an accolade the culinary guide launched last year in order to recognize those dedicated to sustainable gastronomy. Although some of the restaurants below aren’t 100% plant-based, every eatery offers a devoted (and delicious) vegan menu. 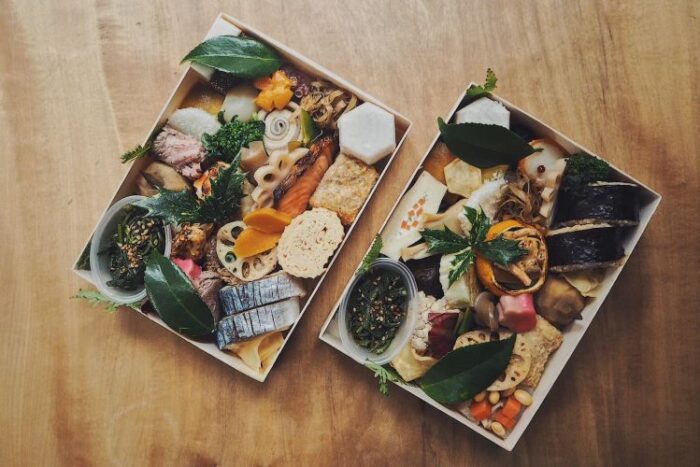 A bastion of tranquility in central Manhatten, Michelin-star Kajitsu specializes in shojin cookery, an ancient Zen Buddhist style of cuisine eaten in Japanese temples. Considered the basis of Japanese cuisine, it is vegan and highly seasonal by its very nature.

A treat for the senses, delicate and aromatic dishes arrive in a steady stream from the kitchen. These from comforting miso soup and tasty black sesame tofu, to an Osechi box of vegetable delights that can contain anything from seaweed kombu rolls, to kumquat, arrowhead and candied chestnut.  There’s also the option of sake pairings. The meal is perfectly rounded off with matcha green tea sourced from a historic Kyoto producer. 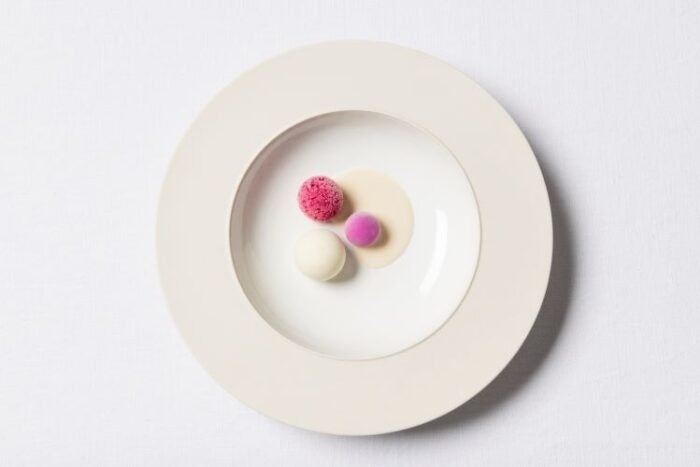 One thing that certainly hasn’t changed at the NYC culinary institution — widely considered to be amongst one of the world’s best restaurants — is the long waiting list. Those lucky enough to get a reservation can expect the same levels of dedication to sophisticated and creative cookery to the vegan menu, with just the right amount of theater.

The opening menu featured dishes such as a silver-cloche tonburi ‘caviar’ service, as well as beets that spent three days in preparation before being cloaked in mustard leaf kimchi and served with a red wine jus. Newer dishes include ‘Grape’ which features grape kulfi with coconut as well as ‘Tofu’, with the soy protein elevated alongside kohlrabi, hazelnuts and truffle. 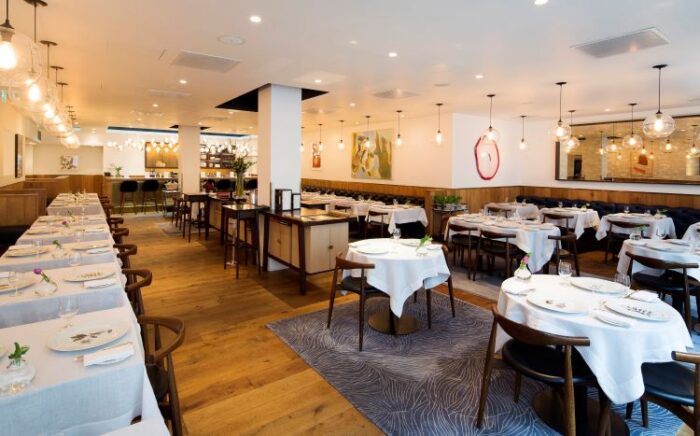 After nine years working under Gordon Ramsay, chef Jason Atherton struck out on his own and opened Pollen Street Social in 2011. Within six months the restaurant had gained a coveted Michelin star as well as a loyal fan base, helping to cement its status as a staple within the London fine dining scene.

Though Pollen Street Social isn’t exclusively vegan, we have included it on our list of the best vegan restaurants in the world due to its exquisite eight-course vegan tasting menu.

Atherton, who now possesses his own global culinary empire, places huge importance on the provenance of his ingredients and has developed long-term relationships with some of the best suppliers in the country. Diners can expect a relaxed atmosphere in which to enjoy vibrant dishes such as Beetroot and celeriac tart with fresh blackberries and Braised broccoli with broccoli purée, seaweed powder and toasted almonds.

Pied a Terre is another London restaurant that although not fully vegan, offers a sublime vegan menu.

Having been a feature on the city’s Charlotte Street since the early 90s, it is one of the capital’s longest standing Michelin-starred restaurants, with some of the best chefs having passed through its kitchen. 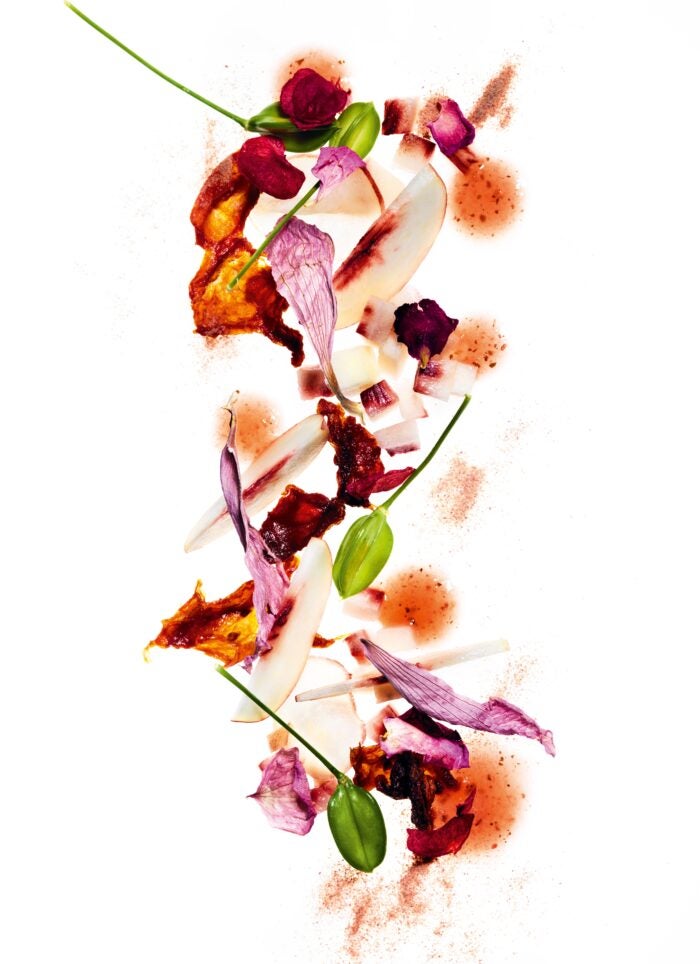 Just outside Bourdeaux in the small coastal town of Arès, you will find Ona — France’s first vegan Michelin-starred restaurant. In a country that prides itself in the use of cream, butter, eggs and meat, this is no small feat. Earning the prestigious accolade in 2021, five years after the crowd-funded eatery opened its doors, it also scooped a Michelin Green Star thanks to its sustainable practices.

Vallée takes her inspiration from the seasons and her Odyss menu is arranged around 11 vegan courses with optional wine pairings. Cooked with huge amounts of passion, the chef isn’t afraid to fuse complex flavors and techniques. A fine example of this is Vallée’s  Acorn, iyokan and butternut dish that combines celery pressée, shitake mushrooms, grape ravioli, Japanese citrus fruit, argan and pumpkin rolls with tamarind, smoked potato mousse and lacto-fermented wild fruits. 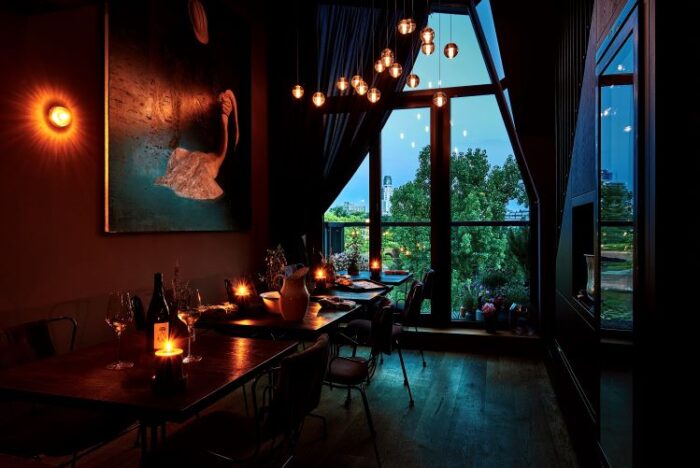 Next on our list of the best vegan restaurants in the world is Michelin-starred Seven Swans, located on Frankfurt’s River Main. From a petite kitchen in the city’s narrowest building, chef Ricky Saward (previously of Michelin-starred Villa Merton) and his team cook up creative and intricate vegan dishes with most of the ingredients arriving straight from the restaurant’s farm to the north of the city.

It’s this commitment to organic produce and hyper-local sourcing that earned the restaurant the 2019 Michelin Germany Sustainability Prize, followed shortly by a Michelin Green Star.

Saward told the Michelin Guide: “My cuisine was not ‘born’ vegan, but has developed in that direction, especially thanks to the great produce from our own field. As a result, concepts like regionality, seasonality, “farm to table”, “root to leaf” are just as natural to me as the effort to conserve resources. 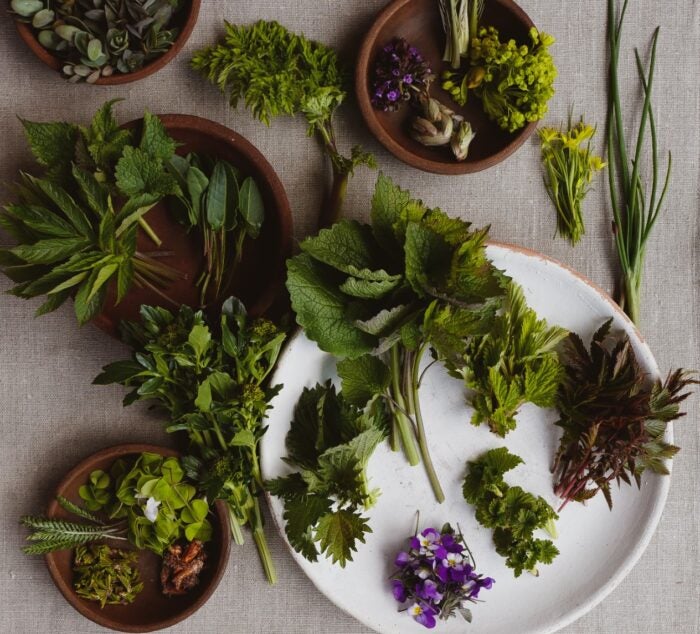 Scandi-cool Grön in central Helsinki is another restaurant on our list that isn’t exclusively vegan, however, offers an exceptional vegan menu.

Organic and wild Scandinavian produce is the order of the day at this cozy Michelin-star and Michelin-Green-Star restaurant.

Chefs Toni Kostian and Janne Keskevaari produce plates that celebrate the beauty of nature from the restaurant’s open kitchen. The ambitious menu changes with the seasons but expect inventive raw, fermented, grilled and charred dishes such as Matsutake taco with legumes and preserved Finnish Burgundy truffle, and Steamed celeriac with a vegan leek and chive ‘beurre blanc’. Dishes can be paired with natural wines or a variety of non-alcoholic selections. 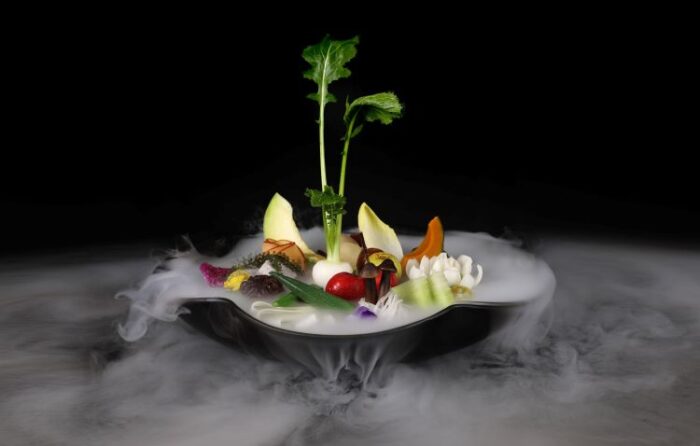 As well as three Michelin stars, King’s Joy also possesses a green star for its commitment to sustainability / ©King’s Joy

Widely considered to be at the forefront of world-class veg-focused cuisine, King’s Joy in the Chinese capital is an essential addition to our shortlist of the world’s best vegan restaurants.

This elegant upscale eatery set overlooking the historic Lama Temple is contained in a serene former courtyard house that has been architecturally transformed to feature a glass-roofed dining room.

Ask for the vegan menu which is filled with pure and flavorsome delights such as monkey’s head mushrooms with pineapple, nuts and slithers of straw mushrooms and sweet honeylocust with lotus seeds and peas.