The Hungarian capital abounds with excellent fine dining spots. Many of the best restaurants in Budapest take influence from the surrounding eastern European countries, as well as the city’s multicultural history (Jews previously made up 23% of Budapest’s population, meaning the city has some of the best Jewish food outside of Israel). While the country was previously well known for its hearty eastern European stews, nowadays you can expect to find traditional Hungarian cooking given a modern European twist.

It’s not just great food the Hungarians are known for, their wine is also some of the best in Europe. They are particularly known for their Tokaji wine, with the two most famous styles being a mineral-filled dry white wine most similar to Sauvignon Blanc, while their dessert wine is sweet and made from grapes that have suffered noble rot. This is what Hungary is most well-known for – a nectar-esque dessert wine world previously favored by Hungarian Kings and King Louis XIV.

To help guide you through which restaurants to visit in the city, Elite Traveler takes a look at 11 of the best restaurants in Budapest.

In March 2010 Costes Restaurant received a Michelin star, becoming the first Hungarian restaurant to receive such an honor and only the second in the Central European region. Costes continues to win local and international awards.

Stylish and elegant, Costes Restaurant is all about forgetting the outside world for a couple of hours. Its  Portuguese-born chef Miguel Rocha Vieira adds touches of his home country to Hungarian-inspired dishes. The service is flawless and friendly, and dishes are prepared with the finest fresh ingredients.

At this Hungarian-owned restaurant, the emphasis is on quality domestic ingredients and appropriate Hungarian wine selections.

The chefs here offer a truly gastronomic journey that showcases international flavors and renewed Hungarian cuisine. As a result, Onyx restaurant has gained a reputation as one of the best restaurants in Budapest, with the acknowledgment of the Gault & Millau restaurant guide and two Michelin stars – the only eatery in Hungary to achieve such status.

This very attractive sidewalk café in the Jewish district is a popular destination for dining as well as for relaxing during the day.

The venue includes both an art gallery and theater, where events take place from September to May, along with a restaurant and coffee house. The food is an unusual and tastebud-tingling hybrid of Hungarian and Mediterranean. There’s live music every night from 7 pm and a Klezmer concert every Friday evening.

Creative young chef Istvan Verestakes inspiration from Hungarian tradition and his Transylvanian roots to produce innovative and often playful dishes made with natural ingredients such as nettle, hay and seaweed.

The Michelin starred restaurant is housed in the historic Piarist Gymnasium. The stylish dining was revamped by Babel’s owner when they moved-in in 2015 but the walls were kept in their original state and still display the scars from the great flooding of Pest in 1838.

Nobu is set within the five-star Kempinski Hotel / ©Nobu

Nobu Budapest is located in the center of the city and offers a private room for parties of up to 16. The restaurant has attracted a host of famous names and faces, including Brad Pitt and Angelina Jolie, Lady Gaga, Keanu Reeves and Robert de Niro.

Rezkakas, located in the heart of Budapest, has become one of the most distinctive and elegant restaurants in the Hungarian capital.

The menu is characterized by traditional Hungarian cuisine, and live music plays in the background as diners enjoy well-plated and generous dishes. 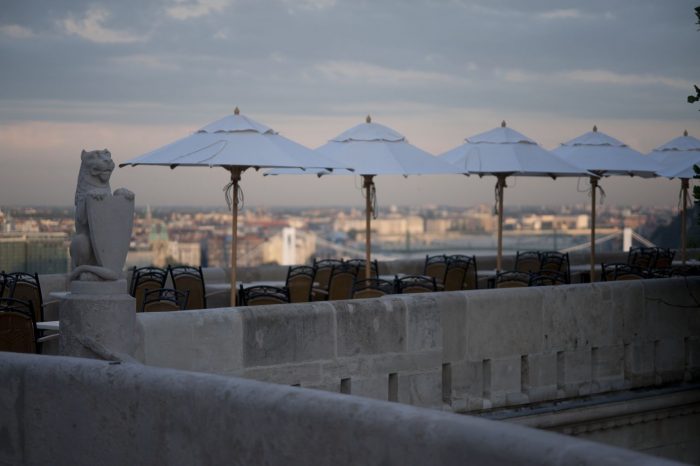 Located in the enchanting Fisherman’s Bastion, one of the city’s best-known landmarks, Halaszbasta Restaurant towers over Budapest’s historic castle district.

The views are amazing, but the food is the real treat and coupled with first-class service the experience is simply flawless. While the interior design, with its restoration in recent years, is considered a masterpiece, it is still worth taking advantage of the delightful roof terrace.

Named after the guards that watch over Buda castle just across the road, Alabardos  has stood in the same spot for nearly 60 years.

The fifteenth-century dining room is atmospheric yet contemporary and the food is inspired by Hungary’s ever-changing borders over the centuries.  Much of the produce is locally sourced and the tastes on the menu originate from the period before paprika arrived on Hungarian soil, therefore dishes are characterized by saffron, ginger, and pepper flavors with a modern twist.

At the foot of Chain Bridge, just in front of Buda Castle, you can find a specially designed, 246-foot boat restaurant on the Danube called Spoon.

The fusion cuisine is exceptional and thanks to its 600 seats, the restaurant offers various possibilities for special events such as weddings, press conferences, private parties and fashion shows. Celebrity clientele have included Lewis Hamilton, Paris Hilton, Arnold Schwarzenegger and Shakira. 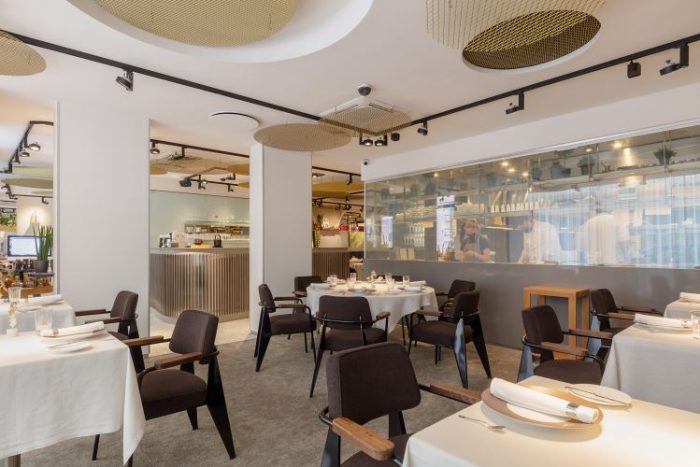 The fortnightly menu is based on fresh and daily purchased ingredients. Many of the 200 wines are offered by the glass, and many are from local producers.