France is awash with first-class wine producers and sprawling vineyards, with the industry attracting millions of visitors to the country per year. However, while the quality of the wine is of great importance, appreciating the beauty of the European landscape is equally important; to help guide your wine tour, we’ve compiled a list of the most beautiful wineries to visit in France.

The diversity of terroirs and climates throughout France allows for an impressive range of grapes to be harvested in the country; from the chalky soils of Champagne to the sandy earth of Burgundy, each region offers its own specialty as well as its unique beauty.

And such is the cultural and historical importance of wine and its producers to the country as a whole, many of the most beautiful wineries and vineyards in France are classified as national monuments or Unesco World Heritage Sites, safeguarding their future preservation and protection.

[See also: An Expert Guide to Starting Your Own Cellar] 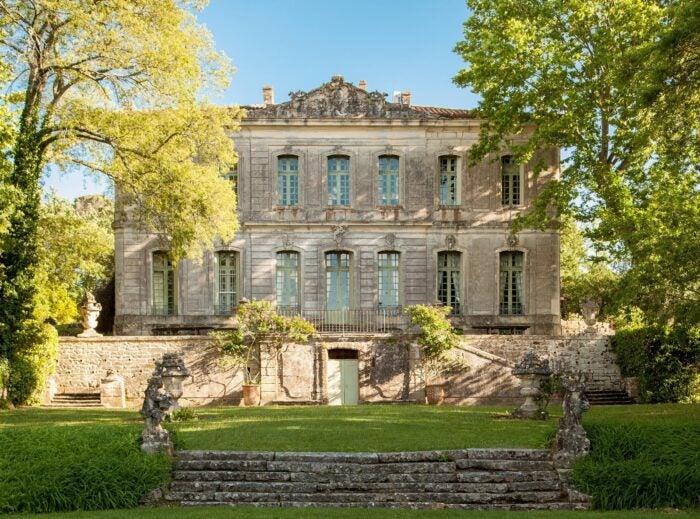 Covering almost 150 acres on the outskirts of Montpellier in the south of the country, Château de l’Engarran has been producing wine since the 1600s and, thanks to its immaculate preservation, is regarded as one of the most beautiful wineries in France.

The estate itself is the epitome of quintessential French charm. The archetypal château, which was built in 1638 and renovated in the 1800s, opens out to perfectly manicured gardens that can be exclusively hired for private events. Travelers will be glad to find that the mild Mediterranean climate makes Château de l’Engarran an inviting destination to visit all year round – but be aware that the château itself is not open to visitors during some winter months.

Three generations of women have shaped the integrity of the Château de l’Engarran winery and its surrounding landscape, with a recent focus on sustainability and biodiversity seeing the estate awarded certification from Terra Vitis (a French body that examines the wine-growing industry’s social, environmental and economic impact) in 2004. 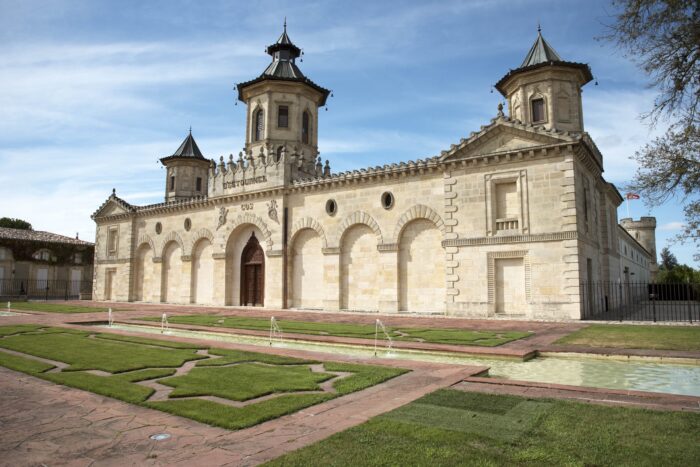 The Cos d’Estournel château was built in the early 1800s with the intention of acting as a winery, not as a residential property / ©Shutterstock

Found in the famous Bordeaux region, Cos d’Estournel is a picture-perfect French winery, and while most visitors come to witness the unique production techniques, the beauty of the estate is an undeniable draw. The estate is known for its commitment to innovation, which it applies to every aspect of wine production in order to maximize the potential of its grapes as well as preserve the natural environment in which they grow.

Cabernet Sauvignon makes up the bulk of the vineyards, with a smaller portion of land dedicated to Merlot, Cabernet Franc and Petit Verdot. Cos d’Estournel proudly notes that some of the vines on the 247-acre vineyard date back to the early 20th century, and though these vines harvest little, what they do yield is integral to the estate’s identity.

While the technology behind the making of Cos d’Estournel’s wines is decidedly avant-garde, the estate’s château is formidable in its historic beauty. Unlike others in the area, the château was built in the early 1800s with the intention of acting as a winery, not as a residential property. The chateau’s architecture has clear Indian influence, with elegant arches and elephant motifs seen throughout – both of which are excellently preserved thanks to a 2008 renovation.

Just a short distance away from Cos d’Estournel is Château Lafite-Rothschild, which, as the first French château acquired by the famous Rothschild family in 1868, has a long and rich history. Anyone familiar with wine will instantly recognize the Château Lafite-Rothschild name; the estate’s eponymous red is regarded as one of the best in the world, with certain vintages sold for record-breaking amounts at auction.

Aside from its fame for producing some of the most expensive wines in the world, the beauty of the winery is also a significant draw for its many visitors. The Renaissance-style château is impressively grand and, at over 275 acres, the surrounding vineyards are some of the largest in the region. Like Cos d’Estournel, Cabernet Sauvignon is the most common grape variety at Château Lafite-Rothschild, with Merlot, Cabernet Franc and Petit Verdot also grown in smaller quantities.

Château Lafite-Rothschild’s vaulted, circular cellars are also of particular interest: when they were rebuilt in 1987 by renowned Spanish architect Ricardo Bofill, they were the first in the world to break from the traditional linear organization. 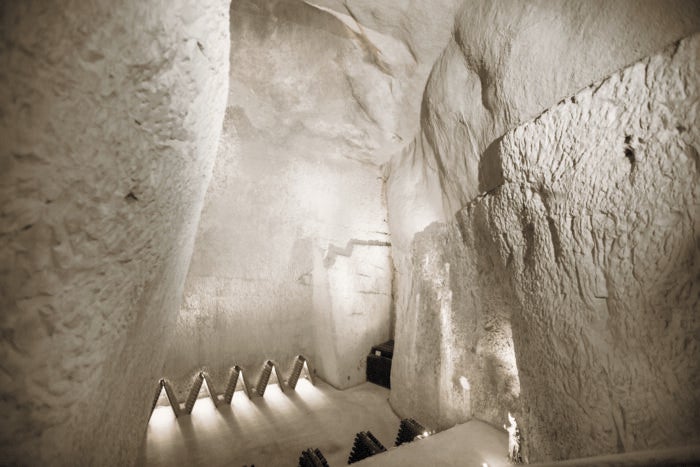 No list of the most beautiful wineries in France would be complete without a mention of the famous Champagne region, found in the northeast of the country. And as the oldest champagne house in the world, the Ruinart estate is a must-see. Ruinart primarily grows Chardonnay grapes in its hilltop vineyards, with the chalky soils of the region making for ideal growing conditions.

However, while the vineyards of Maison Ruinart are undeniably beautiful, it is the magic underground that attracts visitors. The house’s distinctive chalk cellars (Crayères) are the deepest in the region and hold the secret to the ancient champagne-making technique. Ruinart’s cellars were recognized as a national monument in 1931 and in 2015 received classification as a World Heritage Site by Unesco. As part of their visit to Ruinart, guests are invited to enjoy a guided tour through the famous Crayères, followed by a tasting of two of Ruinart’s cuvées.

Despite being the oldest, Ruinart is also one of the most forward-thinking champagne houses when it comes to eco-consciousness and is one of a select few to be awarded France’s Viticulture Durable en Champagne certification in recognition of its sustainable commitments. Ruinart has also recently released a 100% paper bottle case as an alternative to plastic packaging, with the white, chalky texture of the case designed to imitate the walls of Ruinart’s cellars.

[See also: The Future of Champagne: Climate Change and Sustainability]

Found in the famous Savennières appellation of the Loire Valley, the Château de Vaults estate has passed through the hands of many members of the upper echelons of French society since being built in the 17th century, all of whom have carefully maintained its classic beauty. The estate encompasses the 39.5-acre Domaine Du Closel family vineyard, 32 acres of which are dedicated to Chenin Blanc.

The family team behind Domaine Du Closel (which had been female-led for three generations) hold maintaining the vineyard’s biological balance and natural ecosystem as top priorities and have been well rewarded for its eco-commitments; the winery was certified organic in 2006, with full biodynamic certification awarded as of 2015.

A variety of tours and experiences are available at Château des Vaults, including savoring the delicious wines during a guided tasting or a tour of the château itself and the surrounding park. Although highly regarded by wine experts and industry insiders, this beautiful French winery remains little known to the general public, ensuring your visit to the estate will be blissfully unspoiled by crowds.

Built as a wine farm by monks in the 12th century, Château du Clos de Vougeot is located in France’s famous Burgundy region. In the 16th century, a Renaissance-style château was added to the estate, which sits in the heart of the sprawling surrounding vineyards. Although the estate no longer actually produces wine on-site, it remains a symbol of Burgundy’s rich and long-standing wine-making history.

In 2015 Clos de Vougeot became the headquarters of the Climats de Bourgogne (the vine plots of Burgundy), the same year it was recognized as a Unesco World Heritage Site, making it a hotspot for tourists exploring France’s revered wine regions, with guided and self-led tours of the abbey and surrounding landscape both available.

The beauty of Clos de Vougeot is highly regarded, with the estate not only welcoming wine enthusiasts hoping to learn more about the history of Burgundy but also acting as a stunning venue for weddings, parties and receptions.

Once upon a time, Provence was famed for its swathes of lavender fields and picture-perfect Mediterranean coastline. Now, with the rebranding of rosé from a sickly-sweet pop-like liquid to an undeniably chic summertime staple, the region is most famous for its crisp pale wines. Home to some of the most beautiful wineries in France, you won’t be short of wine tourism hotspots in Provence, but our top pick is Château Sainte-Roseline, which is centered around the 11th century Roseline Chapel.

The estate covers some 272 acres of vineyards, with eight different grape varieties. The estate produces red and white wines as well as the signature rosés – its most celebrated bottles include the award-winning Roseline Prestige. As well as a series of immersive winery tours and tastings, Château Sainte-Roseline also invites its guests to peruse its impressive collection of contemporary artworks and the relics of Saint Roseline herself.

[See also: The Most Beautiful Wineries to Visit in Italy]